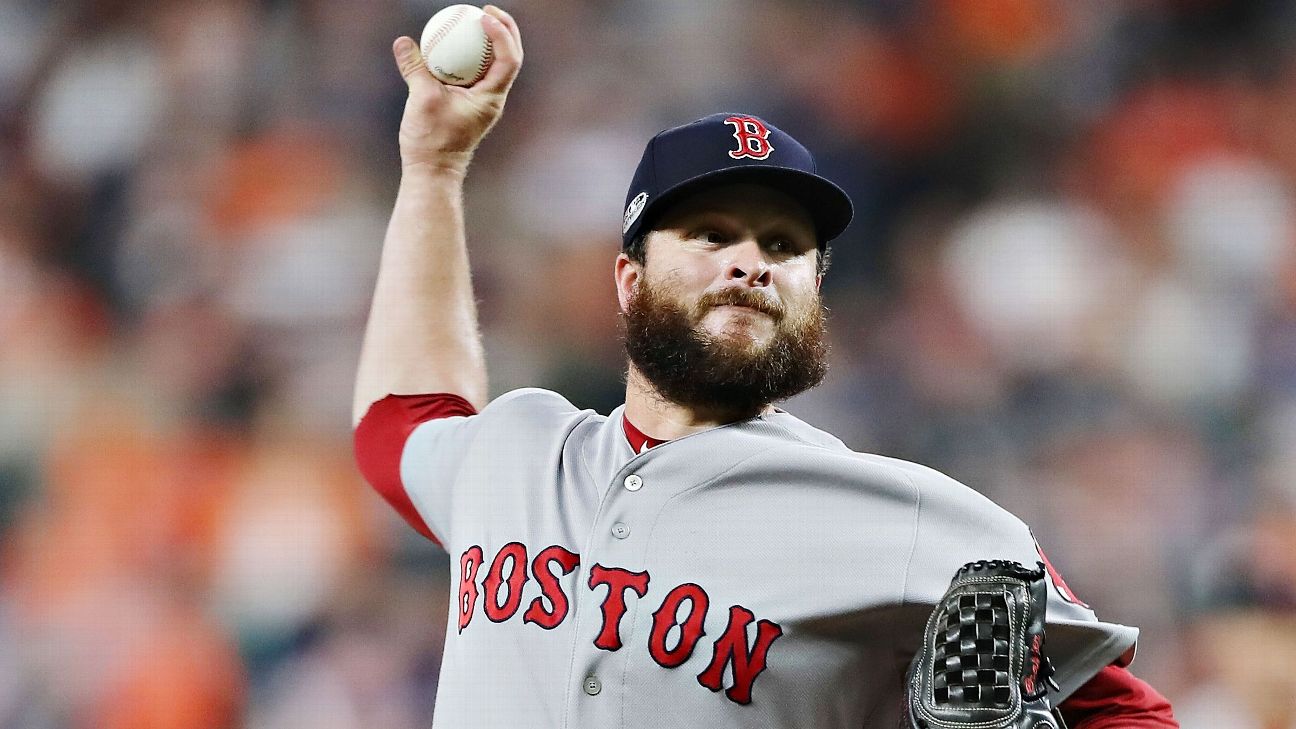 Jackie Bradley Jr.'s grand slam in the eighth inning Tuesday put an exclamation point on Game 3 of the American League Championship Series and the Boston Red Sox's 8-2 win over the Houston Astros. But the most riveting drama came an inning earlier, when an obscure 31-year-old rookie who had signed a minor league contract in March faced the toughest out in the sport.

A year ago, Ryan Brasier figured, he probably was sitting in a hotel room somewhere in Japan. His professional career, which began in 2007 and included a few innings for the Angels in 2013 and a Tommy John surgery, had taken him to Hiroshima, where he pitched 30 innings. But he didn't have a job for 2018. Now he was facing Alex Bregman with a 3-2 lead, two outs and Jose Altuve on first base after he reached on a perfectly placed bunt single down the third-base line.

Brasier was a long way from Hiroshima -- or Orem or Rancho Cucamonga or Nashville or Weatherford College or any of his other stops along the way in his baseball career. Bregman entered the showdown having reached base in 20 of 27 plate appearances in the postseason, an absurd .741 on-base percentage. He already had singled, walked and doubled Tuesday. With two outs, there was a little leeway to be careful with Bregman and instead face the less dangerous Yuli Gurriel, who was on deck, but a walk to Bregman would push the tying run to second base.

Brasier's first pitch to Bregman was a 97 mph fastball just below the knees. Another 97 mph fastball sailed wide and glanced off Christian Vazquez's glove for a passed ball. With Altuve on second and first base now open, the Red Sox had an easy choice: Just put Bregman on and pitch to Gurriel. After all, they had been doing that all series, with seven walks to Bregman.

"There's going to be certain situations that we're going to walk people," Cora said. "But I'm a big believer that when you walk somebody it's more traffic. And Yuli Gurriel is a good hitter, too, and I think he hit .500 with men in scoring position. There's a reason he's hitting behind Alex. I respect Yuli too. We made a pitch, we got him out and we move on."

"Not really," he said. "Sandy called a fastball and I've felt confident with my fastball most of the time, so I thought it was a good pitch and I let her rip."

These are the little moments that make the postseason so intense -- and they don't always have to be between the star players. They can come at any point in the game. Brasier certainly didn't let the moment get the best of him. Or maybe the whole moment was a big blur. After all, it was still Vazquez behind the plate, not Sandy Leon, who didn't enter the game until after Brasier had departed.

So he let that fastball rip. Bregman took it for a strike at the knees. Another fastball was low and away, just off the plate. The Red Sox have been pitching Bregman away the entire series -- 35 of the 66 pitches thrown to him have been on the outer third of the strike zone or off the plate entirely. Bregman didn't bite.

With a 3-1 count, a walk here might have appeared the obvious course, but here's a number to consider: Brasier held right-handed batters to a .109 average in his 33 innings in the regular season. His fastball/slider combo has been lethal on righties -- even good ones. There was also this to factor in: Gurriel isn't as locked in as Bregman right now, but he did rank second in the majors with a .403 average with runners in scoring position.

Vazquez called for a fifth straight fastball. Brasier let another 97 mph heater rip. Bregman hit a line drive to center field, but he didn't get all of it: 87.8 mph exit velocity with a hit probability of 35 percent. Bradley took a couple of steps in and Brasier had recorded the biggest out -- so far -- of Boston's season.

Nathan Eovaldi recorded the first 18 of those biggest outs in his second straight strong postseason start. He looked shaky in the first inning when it took 26 pitches to get three outs as the Astros scored one run to cut into a 2-0 Red Sox lead. Eovaldi settled down after that, but Houston tied the game in the fifth when Bregman hit a bouncer to third baseman Rafael Devers that turned into a double when Devers whiffed while trying to make the short-hop backhand.

Eovaldi walked off the mound shaking his head.

"I was a little frustrated," he said. "He was able to sink a ball down the line and get a double out of it. I was more upset that I had two outs and I had an 0-2 count on Altuve and ended up walking him. I feel like that's kind of that baseball karma. Anytime you allow a free basepath with two outs, I feel like something ends up happening, and it did right there."

Still, Eovaldi was impressive -- especially the way he adjusted the second time through the lineup, relying less on his high-octane fastball that reached 100 mph seven times against the first eight batters.

"First time through the lineup, I attacked them with a lot of fastballs and they were really aggressive," Eovaldi said. "The second time through, I wanted to at least get that first-pitch strike with all three pitches and try to read their bat swings and approach up there."

The first time through the order, Eovaldi threw 17 four-seam fastballs. The second time through, he threw more cutters and splitters and just three four-seamers. After Steve Pearce homered to give the Red Sox the lead in the top of the sixth, Eovaldi delivered a key shutdown inning, working around a two-out single to get Brian McCann on a fly ball to center for his final out.

That made his family and friends happy. He's from Alvin, about 30 miles south of Houston, and while he said he requested only 11 or 12 tickets for the game, he said a lot of those friends had texted to say they already were going to the game. In the clubhouse afterward, he said he already had received more than 100 text messages -- and laughed when asked if he'd responded to them yet.

Yes, it feels good to win.

Eovaldi going deep into the game was huge for a couple of reasons. It allowed Cora to bridge the game directly to Brasier and Matt Barnes, his two reliable setup guys in front of closer Craig Kimbrel. The added insurance in the eighth took Kimbrel out of the equation and removed any possible need for Cora to use Rick Porcello in relief, which would have thrown his Game 4 start in jeopardy.

Now the Sox are in great shape for Wednesday and might even rate the edge in the starting pitching matchup, with Porcello facing Charlie Morton, who hasn't pitched in two weeks and has thrown just 58 pitches over the past month. Brasier threw just 14 pitches and Barnes just 16, so both should be available for Game 4.

They still have two more games in Houston. They believe they can win both.

"You don't get to 108 wins without winning on the road," Brasier reminded one and all after the game. 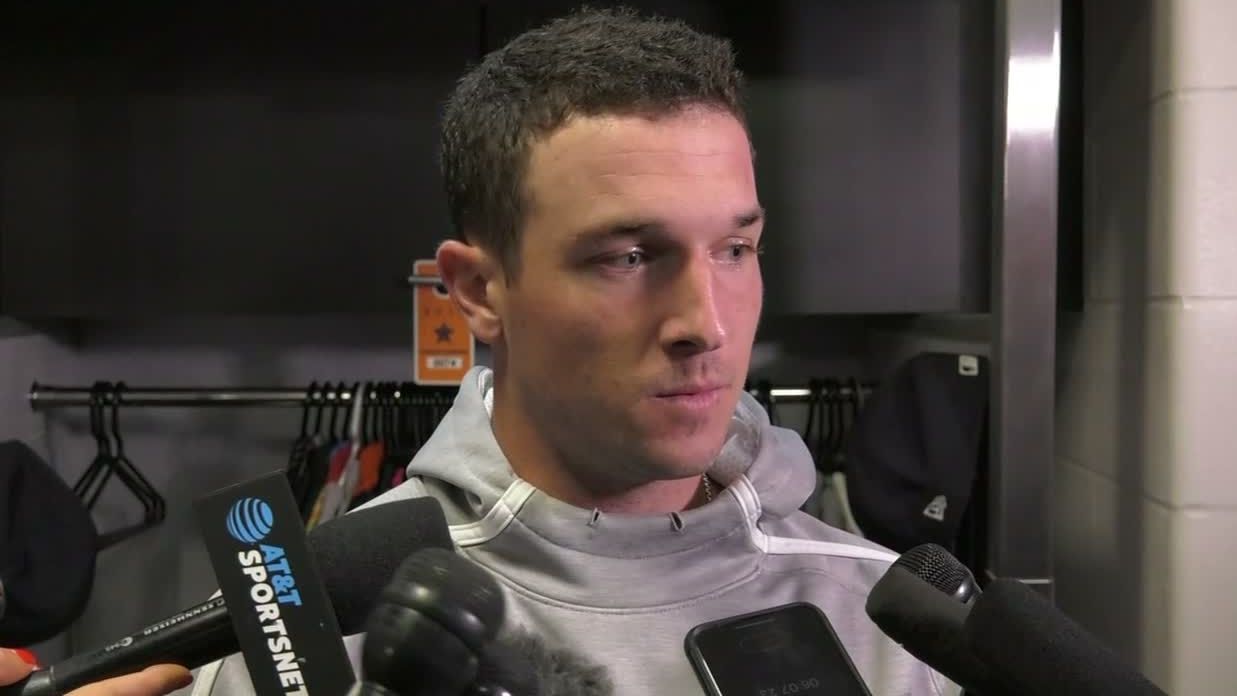