Russell Westbrook scores 34 points after being guarded by Rudy Gobert 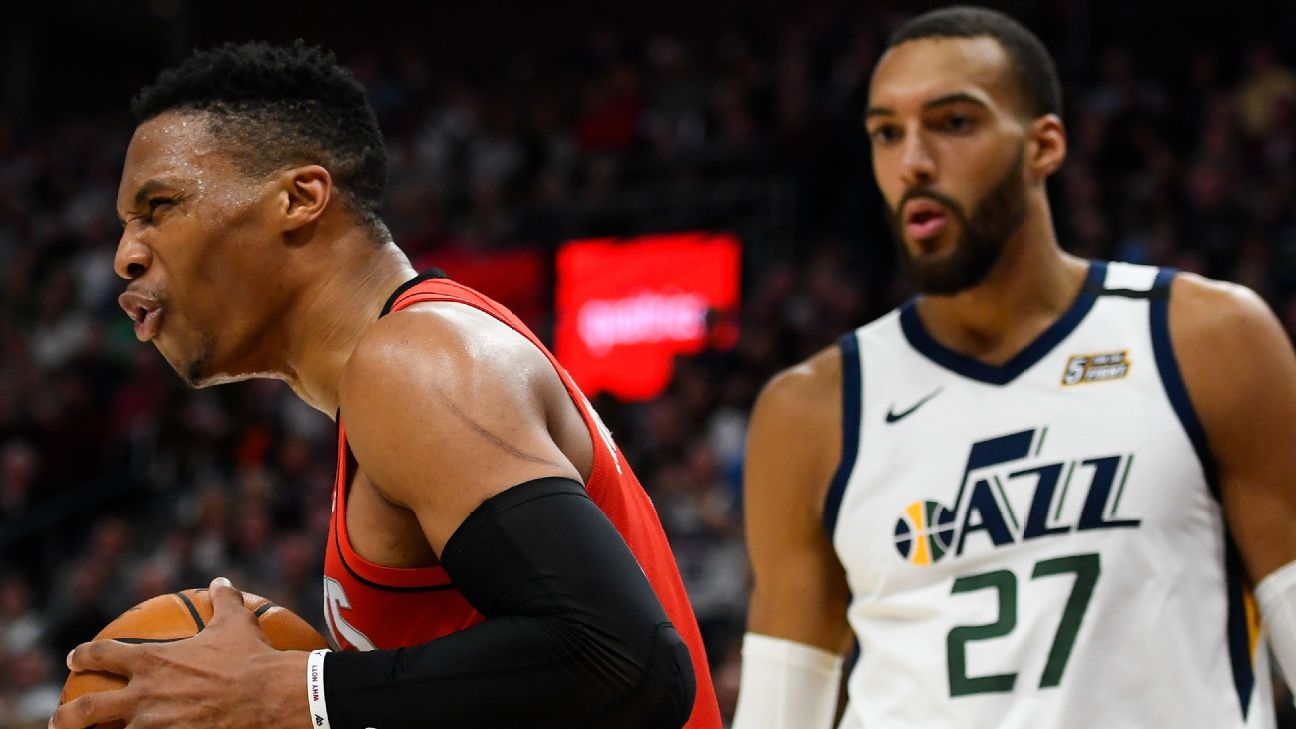 SALT LAKE CITY -- The most fascinating matchup in a potential playoff preview Saturday night at Vivint Smart Home Arena pitted the tallest man on the floor against the shortest, a 7-foot-1, two-time reigning NBA Defensive Player of the Year guarding a 6-3 recent MVP.

The Houston Rockets' unprecedented commitment to a small-ball approach forces opponents to come up with unconventional game plans, such as the Utah Jazz giving center Rudy Gobert the assignment of guarding point guard Russell Westbrook.

"I don't know if it's working," Westbrook said with a grin after scoring 34 points on 14-of-26 shooting in a 120-110 win that pulled the Rockets even with the Jazz for fourth place in the Western Conference and clinched the series tiebreaker. "I get what I want, get whatever I want. Get to the basket and shoot, drive and kick, pace and speed. It's something you can't scout for. You can scout moves, you can scout for all that, but speed you can't scout for. And that's what I've got to my advantage."

It's the second time in the past two weeks that the Jazz have used the strategy. Westbrook scored 39 points on 18-of-33 shooting in a 114-113 home loss to the Jazz on Feb. 9, when Utah's Bojan Bogdanovic hit a tightly contested 29-foot buzzer-beater to beat the Rockets.

The Rockets put teams in a bind by surrounding NBA scoring leader James Harden and Westbrook with 3-point threats. Opponents often blink, to use Houston coach Mike D'Antoni's term, by trying to match up with their own small lineups.

That isn't an option the Jazz are willing to consider, not with the value provided by their All-Star center.

"Obviously, it didn't work, but teams are going to have to try guarding different things," said Harden, who had 38 points on 13-of-23 shooting and seven assists. "If they want to have Rudy Gobert out there, then they've got to find out who he's going to guard."

The most logical answer, Jazz coach Quin Snyder has concluded, is to put Gobert on Westbrook. Gobert's rim protection would be mitigated if he guarded P.J. Tucker, who is listed as a center but is used offensively almost solely as a 3-point shooter, pulling his man away from the basket. Gobert sags far off Westbrook, daring him to take the jumper that the All-Star guard typically hits at a subpar percentage and limiting his opportunities as a facilitator.

"We make him work. That's pretty much it. We make him work, and he's able to make those shots sometimes, and sometimes he's not. We've got to live with that and do what we do."

Westbrook is shooting 40.9% on midrange jumpers this season, according to NBA.com/stats, but he was 7-of-13 on those shots in Saturday's win. The Rockets came up with wrinkles that allowed Westbrook, whose four assists matched his total from the other matchup with the Jazz this month, to basically walk into some of those shots.

For example, after the Jazz pulled within seven points with just under four minutes remaining in the game, Harden brought the ball up the floor and dished it to Westbrook on a dribble handoff that served as a screen. When Gobert went underneath to cut off the driving lane, Westbrook swished an uncontested jumper from the left elbow.

"That's cash," Westbrook said. "Cotton shot. Me and my pops worked on that since I was 14 years old. Cash money."

Westbrook has consistently dominated since the Rockets fully committed to playing a small-ball style by attacking the basket. He has converted 67.8% (61-of-90) of his shots in the restricted area during the seven games Westbrook has played since former Houston centerClint Capela's final game with the Rockets.

Westbrook was 5-of-9 in the restricted area Saturday night. Of those five baskets, the only one that came off a drive out of a half-court set happened when Gobert was off the floor. Westbrook finished over Gobert after grabbing an offensive rebound, had a pair of dunks in transition and caught an alley-oop from Harden when he cut backdoor behind the Jazz big man -- a highlight that happened immediately after a trash talk exchange with a fan sitting courtside.

"Before the oop, the guy was telling me, 'Shoot the 3! Shoot the 3! Gobert's the best defensive player in the league,'" Westbrook said. "I said, 'OK, OK,' and while he was talking, I went backdoor. It happened that quick."

The Rockets are used to facing unique defensive schemes. Harden is frequently doubled as far as 40 feet from the basket as opponents try to force the ball out of his hands, a tactic that has become less effective as Westbrook has become more comfortable after an offseason in which he underwent arthroscopic knee surgery and switched teams after spending the previous 11 campaigns with the Oklahoma City Thunder.

Houston went all-in on small ball in large part to open up the floor for their two All-Star playmakers, who have led the Rockets to seven wins in the nine games since going to a lineup of 6-foot-7 and shorter.