Real or not? George Springer could be going from star to superstar 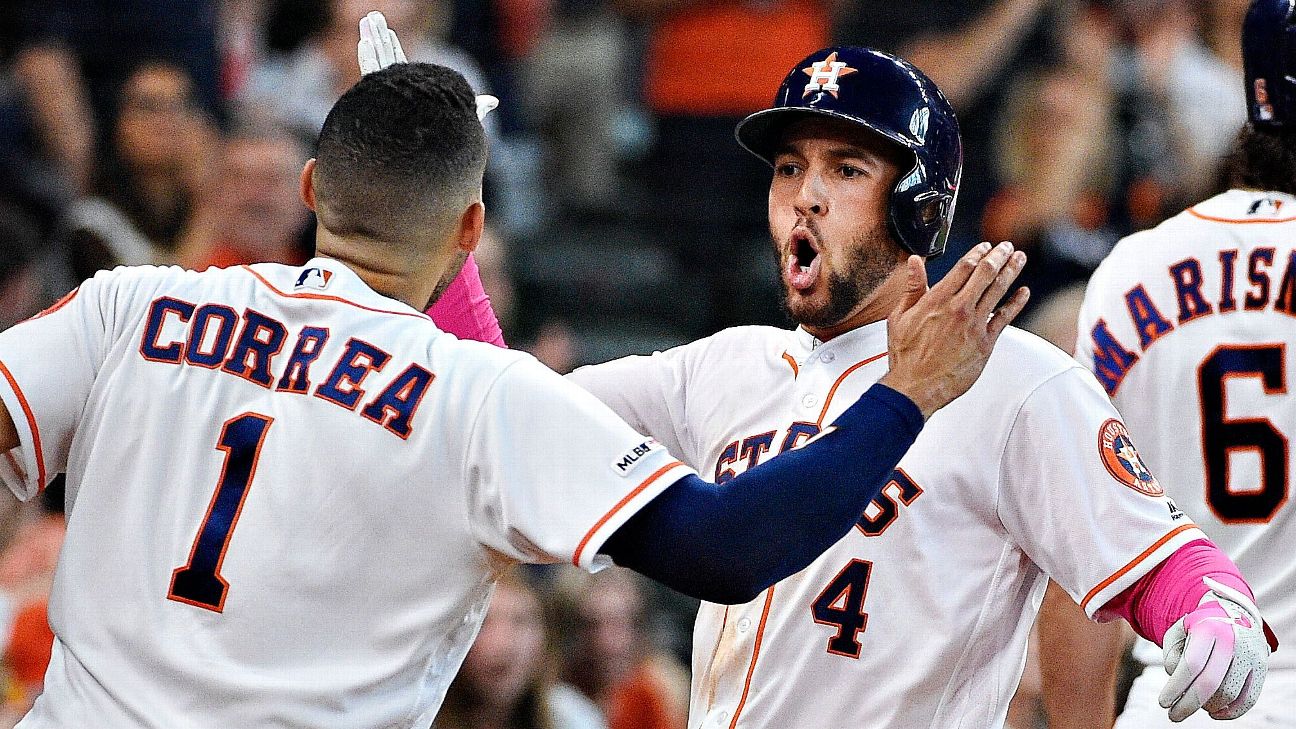 ESPN
By David Schoenfield
So George Springer had a pretty good Mother's Day as the Houston Astros beat the Texas Rangers 15-5:

Unfortunately, Springer was on deck for the final out of the eighth inning, so he missed an opportunity to go 6-for-6 for the second time in his career. Joe Morgan is the only other player in Astros history to go 6-for-6 and, according to the Baseball-Reference Play Index, the only players with two 6-for-6 games since 1908 are Doc Cramer and Jim Bottomley.

Springer's second home run clocked 106.4 mph and landed on the train tracks to complete a 5-at-bat, 5-run, 5-hit, 4-RBI afternoon and give him the American League lead with 15 home runs:

Springer has been on an absolute tear -- .486 with six home runs and 13 RBIs over his past nine games -- and is hitting .321/.400/.660 overall, putting him in the early chase for best player in the American League this season. Springer is a two-time All-Star and had a 5.1-WAR season in 2016, and we saw him rip the Dodgers apart in the 2017 World Series when he homered five times (he has a career .638 slugging percentage in 32 postseason games), but there's the possibility that Springer hasn't quite had that pinnacle season.

Alex Bregman also had two home runs to help the Astros complete a four-game sweep. (Houston has scored in double digits in five of its past 11 games.) It also gave us this fun factoid: This was only the fourth time a team's Nos. 1 and 2 hitters hit multiple home runs. The first three:

Aug. 22, 2010: Omar Infante and Jason Heyward for the Braves at Wrigley Field

Sept. 26, 2017: Teoscar Hernandez and Josh Donaldson for the Blue Jays at Fenway Park

Astros show off pitching depth: Corbin Martin made his major league debut in this game for the Astros and gave up two runs and three hits in 5 innings while recording nine strikeouts. Martin was Keith Law's No. 48 overall prospect entering the season, a Texas A&M product and second-round pick in 2017 who has advanced quickly with a fastball that reached 98 mph against the Rangers and averaged 95.7.

Justin Verlander, Gerrit Cole and Wade Miley have been excellent at the top of the Houston rotation, but AJ Hinch has been looking for some consistent production at the back of the rotation. Martin replaced Collin McHugh in the rotation after McHugh gave up 25 runs and eight home runs in his past 18 innings.

Martin grew up in Hempstead, an hour outside of Houston, and was an Astros fan as a kid. He has even pitched before at Minute Maid Field. With his mom and grandmother in the stands Sunday -- along with other family and friends -- he picked up his first major league victory.

Ryu continues to roll: Dodgers lefty Hyun-Jin Ryu lost his no-hit bid with one out in the eighth inning when Gerardo Parra doubled to deep left-center. He actually should have lost the bid in the sixth inning when Stephen Strasburg lined an apparent base hit to right field, only to have this happen:

Ryu settled for eight scoreless innings -- on the heels of a four-hit shutout over the Braves in his previous start:

Ryu has given up one run in 25 innings over his past three starts, lowering his ERA to 1.72, and has a season strikeout-to-walk ratio of 54-to-3. ESPN's Alden Gonzalez just wrote about Ryu, a story in which catcher Russell Martin compared him to Hall of Famer Greg Maddux with his pinpoint location this year. Indeed, his shutout against the Braves required only 93 pitches, a sub-100 pitch shutout referred to as a "Maddux."

Ryu's success is a product of expertly sequencing five pitches -- fastball, cutter, sinker, curveball, changeup -- and throwing them to all four quadrants of the strike zone, a quality Dodgers catcher Austin Barnes considers "pretty unique." Ryu creates deception with his delivery, pinpoint control and near unpredictability in his pitch selection.

Dodgers hitting coach Robert Van Scoyoc spent the 2018 season as a strategist with the division-rival Arizona Diamondbacks and found it almost impossible to craft game plans for Ryu.

"He doesn't have any consistent tendencies," Van Scoyoc said. "He knows how to pitch, he knows how to change speeds, and I think he reads the hitters very well. Even if he has a plan, he'll deviate from it. There's just not anything consistent about how he attacks each guy."

Of course, Ryu has a long list of injuries during his six seasons with the Dodgers, missing all of 2015, pitching in only one game in 2016 and making only 15 starts last season because of a groin strain. After he threw a career-high 116 pitches in the 6-0 victory over the Nationals, the Dodgers might want to give him an extra day of rest before his next start. No team is more cautious with its starting pitchers than the Dodgers.

Yankees, Red Sox close in on Rays: The Rays have had a great start at 24-15, they've given up the fewest runs in the majors, the Yankees have battled a bazillion injuries and the Red Sox got off to a dreadful start and ... yet. The AL East now looks like this after Masahiro Tanaka outdueled Blake Snell and the Red Sox pounded the Mariners for the third game in row:

Tanaka threw only 73 pitches in seven innings, giving up five hits and one run with seven K's.

Compare that to Snell, who was more dominant with 12 strikeouts in 5 innings but threw 96 pitches and had a relatively early exit (the Yankees tacked on five runs against the Tampa bullpen). As good as the Rays have been, we know this division is likely to come down to head-to-head action against the big, bad rivals, and they're now 1-5 at home against the two clubs.

Since their 6-13 start, the Red Sox have gone 16-6, including 11-2 over their past 13 games. They scored 34 runs in the series against Seattle. In those first 19 games, the Red Sox were outscored by 42 runs. In the next 22, they outscored their opponents by 69 runs. It appears the World Series hangover has ended.

Bumgarner trade stuff: The Giants beat the Reds 6-5 with two runs in the eighth inning as Madison Bumgarner picked up a no-decision with four runs allowed (two earned) in six innings. He gave up a home run to Yasiel Puig and reacted in classic Bumgarner fashion after the game: "He's a quick study. It only took him seven years to learn how to hit that pitch."

On Saturday, Ken Rosenthal tweeted that Bumgarner had submitted a list of eight teams he can block a trade to: Braves, Red Sox, Cubs, Astros, Brewers, Yankees, Phillies and Cardinals.

As Rosenthal pointed out, that's a list of teams most likely to be interested in Bumgarner, so it's more a strategic ploy on Bumgarner's part to gain some leverage if the Giants do look to trade him. That could include blocking a trade to a team he doesn't want to play for in favor of one he prefers. Note that a trade isn't necessarily a bad thing for Bumgarner since players traded during the season are not eligible to receive a qualifying offer in free agency (which could hurt a player's value in free agency as might be the case with Dallas Keuchel and Craig Kimbrel).

Strategic move of the day: The Pirates are carrying 13 pitchers on their active roster and, as I've written before, carrying only four bench players in the National League inevitably leaves the manager's hands tied. Most managers refuse to use their backup catcher (even though the odds of an injury that would require the use of a non-catcher behind the plate are exceedingly slim) so that means you're really playing with three bench players unless circumstances finally require using the backup catcher, usually only in extra innings to pinch hit.

The Cardinals led the Pirates 6-3 in the sixth inning with the Pirates batting, one out, nobody on base and the pitcher up. A pretty low-leverage situation, but one you would certainly want to send up a position player to hopefully start a rally. Instead, with a limited bench, Clint Hurdle sent up pitcher Joe Musgrove to hit. He grounded out and the Pirates went down 1-2-3.

Pittsburgh rallied to win the game anyway, scoring five in the seventh and two in the eighth. In the seventh, after Josh Bell tied the score with a three-run homer, Melky Cabrera later hit for shortstop Cole Tucker and walked with two outs. Adam Frazier then hit for the pitcher and doubled in two runs:

So by not using one of his pinch hitters in the sixth, Hurdle still had two available in the seventh. I still don't know if it was the right decision, but on this day it worked.

Bell, by the way, continues to rake, going 4-for-5 with five RBIs, and is now hitting .319/.389/.659. The numbers are legit with more line drives, a lower ground ball rate and increased average exit velocity -- from 90 mph last year to 94.6, which ranks fifth in the majors.

I don't know exactly what to make of the Pirates; they're now tied with the Cardinals in the standings, but the Cardinals have a 55-run differential advantage. That's one reason FanGraphs projects the Cardinals with a 40 percent chance to make the playoffs and the Pirates at 11 percent. The Pirates even have an eight-game losing streak milked into their 22-19 record. Of course, the Cardinals won the opener of this four-game series 17-4 ... but the Pirates won the next three, including 2-1 wins on Friday and Saturday. 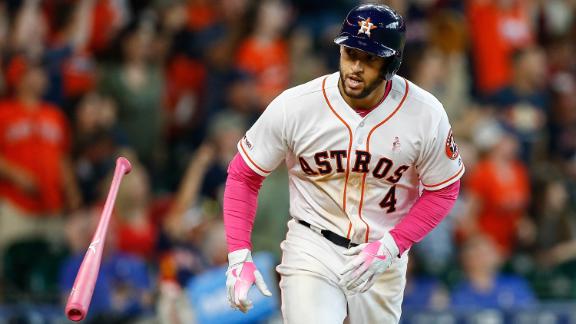