NFL MVP stock watch: Lamar Jackson's historic campaign, and who is still in the race 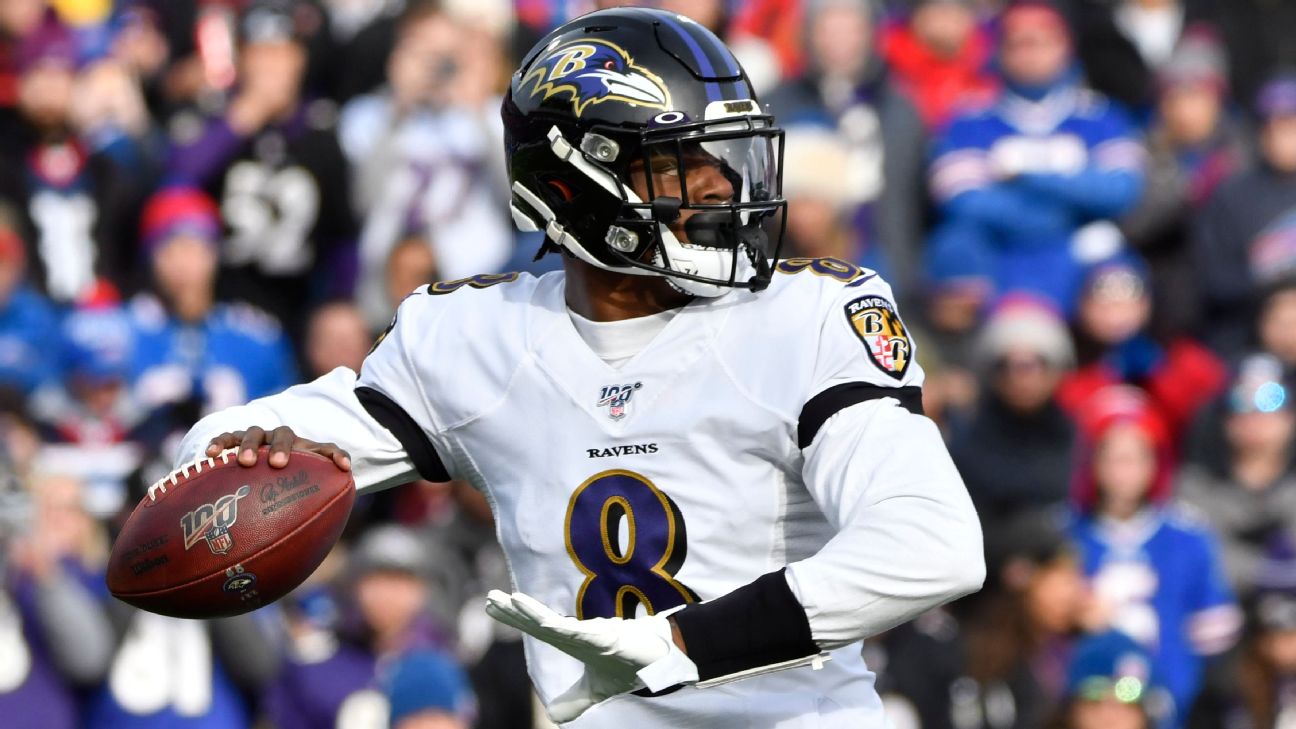 ESPN
By Courtney Cronin
The NFL's MVP race is in a full-on sprint toward the finish line with the final quarter of the 2019 season underway.

Not a whole lot has changed since we last looked at the field of candidates, especially among the front-runners. Lamar Jackson, Russell Wilson and Deshaun Watson spent the past month jockeying for positioning as the recurring favorites, but the second-year Ravens star has undeniably taken a leap ahead of his competition as the most dynamic quarterback the league has seen in years.

Here's how we assembled our list: A panel of eight analysts -- Matt Bowen, Mike Clay, Courtney Cronin, Jeremy Fowler, Dan Graziano, Mina Kimes, Kevin Seifert and Field Yates -- vote every four weeks on the top players in the MVP race. We use those eight sets of rankings to give our top five candidates overall, using Heisman Trophy-esque scaling for each ranking. We also look at a few names who have seen their MVP stock either spike drastically or plummet over the past four weeks.

While it might appear that the award is all but locked up, there are still three games remaining for a handful of candidates to further their case. Here's a look at where things stand for the MVP hopefuls through 14 weeks.

Jackson's statistical achievements alone are reason enough to see why the young QB is running away with the award. But he also has come out victorious in every prove-it game since two outlier losses early to the Chiefs and Browns. He followed up his four-touchdown outing against Houston by throwing five TDs (three in the first half) against the Rams before earning a statement victory in a takedown of the NFC-favorite 49ers in Week 13.

Jackson surpassed the record for rushing attempts by a quarterback (151 in 13 games) that he set last year as a rookie, jumped Wilson in passer rating for the first time this season (109.2, second in the NFL) and became the first quarterback in NFL history to throw four TDs and notch 50 rushing yards in consecutive games. Even when Buffalo attempted to limit the damage Jackson did on the ground in Week 14 (Jackson's second-lowest rushing output since Week 1), the quarterback still found a way to beat one of the league's best defenses on the road by getting creative in the red zone -- where he has yet to throw an interception.

Since Wilson's monster outing against Tampa Bay in Week 9 (five passing TDs, one rushing TD), the NFL's highest-paid quarterback hasn't topped 100 in passer rating and has thrown an interception in each of his past four games. Does that mean his MVP candidacy is all but over? Not necessarily, despite Jackson's surge and the fact that the Baltimore QB beat both Seattle and Houston by a combined 48 points this season.

The gap between Jackson and Wilson could shrink if the former stumbles down the stretch and latter is able to lead his team to an NFC West title. Wilson just needs to have three outings that resemble the first time the Seahawks played the Rams (four touchdowns), not the outcome from this past Sunday (zero TDs and an interception) that snapped a five-game winning streak.

Watson had his MVP moment against the defending Super Bowl champion Patriots, putting on a show in prime time, where he has been dominant his whole career (21 passing touchdowns to just three interceptions). In that game, Watson not only threw three touchdowns, he caught one, as well, becoming the fourth player in NFL history to achieve that feat, according to Elias Sports Bureau data. But Houston followed up the statement AFC win with a dud against Denver. If not for Watson's thundering second-half comeback -- two rushing scores and another while passing -- the game would have been a blowout.

The third-year QB has compiled a tremendous season, and the Texans are in line for the playoffs; but statistical achievements ranking in the top 10 such as his passer rating (100.9) and QBR (71.7) aren't enough to put Watson ahead of Jackson and Wilson. He'll need some big-time performances against Tennessee (twice) and Tampa Bay to boost his candidacy.

The Kansas City QB has fought his way back into the MVP race since returning from injury in Week 10 and has the Chiefs riding a three-game win streak and clinching the AFC West. The two games Mahomes missed probably will hold him back from keeping pace with the likes of Jackson, but his body of work can stand on its own. Tyreek Hill, Eric Fisher, Damien Williams, Andrew Wylie and Sammy Watkins have all missed games for the Kansas City offense, while the Chiefs' defense has disappointed at times. Yet the reigning MVP has found ways to continually come through without all of his supporting cast.

After throwing an interception on his first drive in New England in Week 14, Mahomes bounced back and passed for 283 yards and a touchdown against one of the NFL's best defenses, giving Kansas City a signature victory that could bolster his MVP chances down the stretch.

Let's start by acknowledging that no receiver has ever won the MVP award. But Thomas' record-setting season in New Orleans deservedly puts him in the conversation. The Saints wideout became the fastest to reach 100 catches (in 11 games), is 22 catches away from breaking Marvin Harrison's single-season reception record set in 2002 (143) and leads the league in three categories (receptions, receiving yards and receiving yards per game).

His value to the Saints' offense is unquestioned, as he leads the league in receiving expected points added, and he has done it with and without quarterback Drew Brees throwing him the ball. (A thumb injury cost the QB nearly six complete games.) Thomas earned NFC Offensive Player of the Month in November, totaling 37 catches for 415 yards and two touchdowns, including a 11-134-1 line in a close loss to the 49ers this past week.

Aaron Rodgers, QB, Green Bay Packers: A Green Bay offense predicated off a rushing attack has the Packers vying for a first-round bye in the playoffs. Rodgers has kept pace in the MVP race this season with tremendous play in the red zone, per usual. But his numbers just aren't on par with the award's front-runners, having only topped 300 yards passing in three games this season, ranking just outside the top 10 in passing touchdowns (23) and recording the worst Total QBR mark (54.5) of his career.

Dak Prescott, QB, Dallas Cowboys: The Cowboys might be struggling, but Prescott has proved he is worthy of being in the mix given his individual achievements. He is on pace to become the fourth player in history with 15,000 passing yards over his first four NFL seasons, has a league-high 4,122 passing yards through 14 weeks and owns the third-highest Total QBR (72.1) despite his team's 6-7 record. The Cowboys' receivers often have failed him, leading the league in dropped passes with 23, but Prescott still ranks fifth in passing touchdowns (24) and yards per attempt (8.3).

Kirk Cousins, QB, Minnesota Vikings: Even though Minnesota built its offense around running back Dalvin Cook, Cousins has broken out of game manager territory behind an oft-explosive passing attack that has him on pace to record yet another 4,000-yard, 25-TD season. The tides have shifted in Minnesota, and Cousins is a major reason why the Vikings can confidently boast their identity as an offensive team. Add in where he ranks in completion percentage (fourth), passing touchdowns (fifth) and touchdown-to-interception ratio (fourth), and the $84 million QB is living up to his expensive price tag.

Christian McCaffrey, RB, Carolina Panthers: There has been a bit of separation from McCaffrey and Minnesota's Cook, considering the entirety of the Panthers offense runs through the Carolina back. McCaffrey has had to carry the load on a team with inconsistent play from backup quarterback Kyle Allen. McCaffrey leads the NFL in yards from scrimmage (1,946) and is third in rushing (1,220). If the Panthers didn't have the former Stanford star, they would be in serious trouble -- much worse than their current 5-8 state. McCaffrey's efforts in the run game mirror what he has done to keep the Carolina passing attack afloat, averaging 8.4 yards per catch to go along with his 726 receiving yards and four touchdowns.

Holy cow, was Jimmy G impressive in the 49ers' heavyweight battle in New Orleans? The Niners QB threw for 349 yards, four touchdowns, one interception and a 131.7 passer rating. But what he'll be remembered for most is how he led San Francisco to win No. 11. Trailing by one point with just over a minute remaining, Garoppolo connected with tight end George Kittle for a huge reception on fourth-and-2 to set up the winning field goal, an epic moment that edges him further into the MVP discussion.

He'll be in the mix for the NFL's Defensive Player of the Year, but Gilmore has made his case for the MVP too given his role on this historic Patriots defense and how he repeatedly shuts down No. 1 receivers. Despite losses for New England in back-to-back weeks, Gilmore played a main role in limiting Houston's DeAndre Hopkins and Kansas City's Hill. Gilmore is one of the best corners in the game.

There's absolutely no knock to be made on Cook's play, but Cousins' recent uptick has allowed the Vikings to spread the ball around more, thus not needing to run their entire offense through the third-year running back. Cook is averaging 3.4 yards per carry in his past five games, which is a drop-off from where he was earlier in the season when he had a steady run of around 5.0 yards per carry. He remains a major part of what the Vikings do offensively even if the spotlight has shifted elsewhere week to week.

Brady still has the Patriots in position for a first-round bye, but his play through 14 weeks looks more like a QB at the end of his career than one on a dominant MVP run. He has struggled under pressure this season. He failed to convert a pass on third or fourth down against the Chiefs in Week 14 after seeing pressure on 43% of his dropbacks, the highest he has faced in three seasons, according to ESPN Stats and Information research. Brady ranks 32nd out of 33 qualifying QBs in completion percentage (28%), last in yards per attempt (2.7) and 29th in yards per dropback (1.0) in that situation.

What has gone wrong for the Patriots offensively is more than just a lack of weapons surrounding Brady. It's also the QB's play in one of the worst statistical seasons of his career. 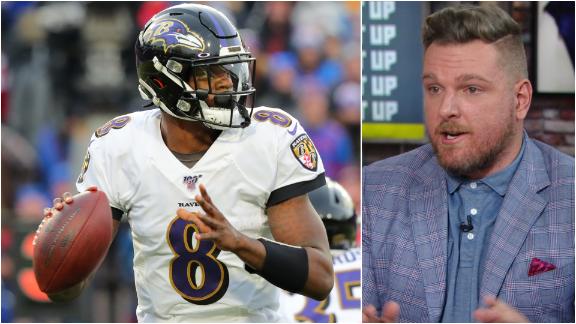 McAfee ready to crown Jackson MVP 'immediately'
Pat McAfee likes what he sees every week from the Ravens and thinks Lamar Jackson deserves to be crowned MVP right now. 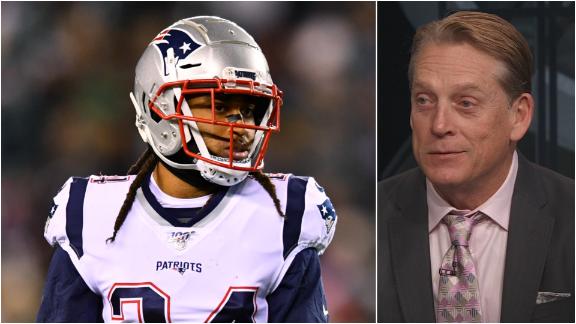 Who is the best DB in the NFL right now?
Jack Del Rio, Ryan Clark and Dan Graziano pick the defensive back they would choose to start their team with. 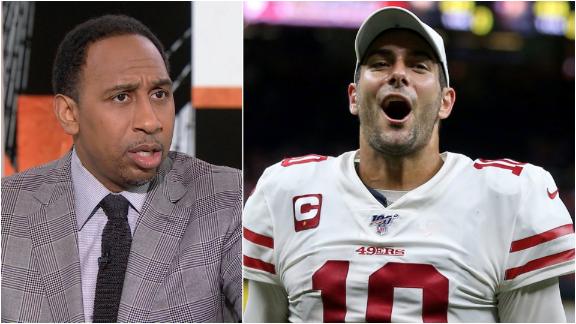