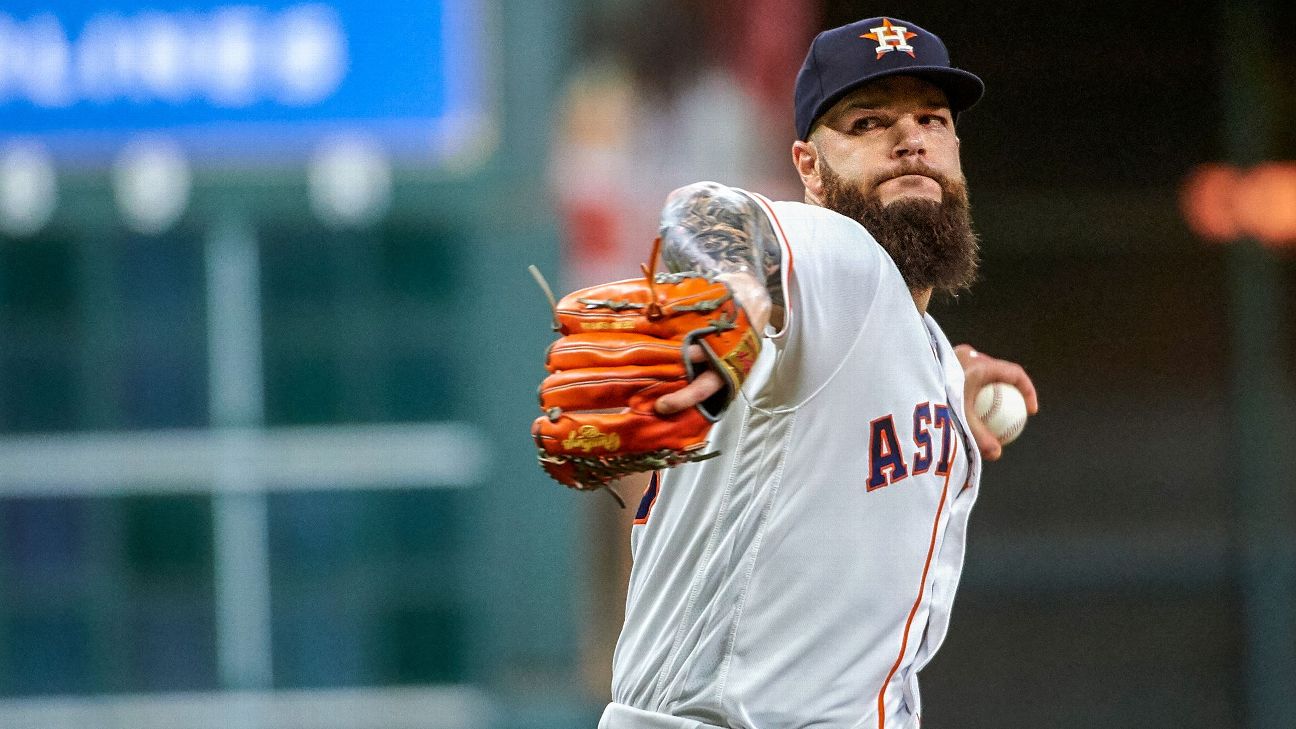 HOUSTON -- Nathan Eovaldi is only the second-best pitcher ever who can throw 100 mph and hails from Alvin, Texas.

That's not an insult.

The other one is Nolan Ryan.

Alvin is a town of 26,000, located 30 miles south of Houston. A local highway is named, appropriately enough, the Nolan Ryan Expressway. Eovaldi said the local McDonald's even had some Nolan Ryan baseball bats and a picture of Ryan fighting Robin Ventura.

Eovaldi, who grew up watching Astros games and even pitched in Minute Maid Park in a high school tournament, met Ryan when he played for the New York Yankeesandnow might be pitching the biggest game of his career in front of the legend, who often sits behind home plate at Astros games.

Eovaldi, however, is more concerned about figuring out how to beat the Astros in Tuesday's Game 3 of the American League Championship Series than scanning the crowd for Ryan.

"I feel like if I go out there and do my job, attack the zone, get that first-pitch strike, not give up any free bases, no walks, things like that, I feel like that will keep the crowd out of it a little bit," theBoston Red Soxrighty said on Monday. "But I know they're going to be loud here, and I feel like with the roof closed, it gets even louder. So I'm definitely looking forward to it, pitching in the circumstance, but just trying to dictate the counts and stay in control."

Eovaldi, 28, did just that in Game 3 of the division series against the Yankees when he held his former team to one run over seven innings. His fastball reached triple digits 11 times in that outing, including the final pitch of his outing. When he's commanding that fastball and delivering swing-and-miss curveballs and sliders, Eovaldi is certainly capable of a lights-out game, which is why the Red Sox have a solid chance of taking a 2-1 series lead Tuesday.

Eovaldi follows lefties Chris Sale and David Price for the Red Sox, and that's noteworthy because the Astros hit righties much worse than lefties, with an OPS 70 points lower. With that mind -- and the string of hard-throwing right-handers in the Boston bullpen -- A.J. Hinch will get a couple of additional lefties in the Houston lineup for Game 3. Brian McCann will handle the catching duties, and Tony Kemp will get the start at either left field or DH (depending on whether Jose Altuve plays second base or DHs because of an ankle injury suffered in the ALDS).

This also could be Dallas Keuchel's last start in an Astros uniform. He's a free agent after the season, and the Astros have Josh James and Forrest Whitley ready to crack the big league rotation in 2019, potentially making the veteran lefty expendable as they spend money elsewhere.

The 2015 Cy Young winner got a little reflective during his Monday news conference without directly addressing the potential emotion of the game.

"When you get older, it's more of a time to cherish stuff, and when you're younger ... I think time goes by faster when you're younger just because you don't really know the routine as well as you do when you're older and you kind of get settled in," he said. "That's why I tell some of the younger guys, 'Hey, you've got to cherish this as much as you possibly can' because I've been through two 100-loss seasons and we're packing our stuff up real early compared to the other teams in the playoffs."

Oh, on top of all that, Alex Bregman posted a video on his Instagram account of the Astros hitting back-to-back-to-back home runs off Eovaldi in June when he pitched for the Rays; Eovaldi gave up four home runs in the game.

All this creates a fascinating backdrop to Game 3 -- and to what should be a fascinating three games at Minute Maid. With the series tied, here are some keys to watch:

Battle of the bullpens. It will be interesting to see how quickly both managers go to their bullpens. Eovaldi's effort against the Yankees was dominant, but in his 11 regular-season starts with the Red Sox, he made it through six innings just two other times (both of those also were against the Yankees). Meanwhile, Hinch was more likely to extend Justin Verlander and Gerrit Cole for a few extra outs than he might be with Keuchel or Game 4 starter Charlie Morton. Hinch brought Verlander back for the sixth inning after a rough fifth, and Cole settled in to pitch six innings after giving up five runs in the first three.

"Those are hard guys to take out of the game because they're really good at the end of their outings," Hinch said on Sunday. "It's not that way across the board for every starting pitcher. If you have the right matchup and you have the player that can come back from a tough inning, some guys can handle it mentally, some guys can't. ... I know my players. I watch them. I see their facial reactions. I know how they operate in the dugout."

Red Sox manager Alex Cora is in a little more of a difficult situation because his bullpen isn't as deep and Chris Sale's health lingers in the background after an overnight hospital stay for a stomach illness. Cora will know more on Tuesday when Sale rejoins the team, but there is the added concern about Sale's command issues and drop-in velocity in Game 1, a potential sign that his shoulder soreness still is an issue.

Plus, the teams will play three days in a row for first time in the postseason. "So maybe a little bit of an interesting dilemma for me or Alex when it comes to how we handle the bullpen in the first game, depending on who is ahead and who is behind, knowing that three days in a row can be pretty taxing on guys," Hinch said. "But you manage to win the game."

Hinch even dropped a line that he wouldn't be surprised to see Rick Porcello again in relief -- which is possible, as Cora still has Eduardo Rodriguez in his back pocket as a potential starter.

Will the Red Sox pitch to Alex Bregman? Bregman has walked six times in two games and also was hit by a pitch. Including the three games of the ALDS, he has reached 17 times in 24 plate appearances and just missed a game-tying home run in the ninth inning of Game 2. The Red Sox obviously are being very careful with him:

Cora indicated the game plan wasn't going to change. Bregman drew 95 walks in the regular season, so he has the patience to keep taking free passes and avoiding expanding the zone. That means continued pressure on cleanup hitter Yuli Gurriel and the guys after him to produce and make the Red Sox pay for walking Bregman.

Defense matters. If you like inside baseball tactics, you might think the decline of the sacrifice bunt and the hit-and-run has removed some of the science from the game. Not at all. As much as the TV broadcast allows you to notice, appreciate the ongoing defensive alignments the two clubs employ depending on the batter and situation -- especially the Astros, who have turned defensive positioning into an art form.

Against Christian Vazquez, for example, the Houston left fielder shifted way over toward center field. The center fielder was shaded to right field, and right fielder Josh Reddick seemed to be playing 10 feet behind Altuve.

"You look behind you and there's about 100 feet behind me at Fenway Park," Reddick said. "So it's definitely nerve-wracking, but our guys take a lot of time to break down swings of guys and how their tendencies are to hit balls to certain parts of the field. ... Our guys in the analytic room work day and night, even on flights, in and out, to make sure they have everything right."

In the outfield, Reddick said he relies on coach Gary Pettis for positioning, but the club also allows some flexibility for players to think for themselves. "When he tells me to move, I go," Reddick said. "And if I see something, he has the willingness to let me move myself, when I see something in the swing."

The first two games were, obviously, uncharacteristically sloppy for these teams -- walks, errors, passed balls, hit batters, wild pitches, 3-2 counts on seemingly every hitter. The plays not made were crucial: Eduardo Nunez's error and inability to range a step to his left to field George Springer's hard grounder led to three runs in Game 1; Cole's throwing error and Martin Maldonado's passed balls hurt Houston in Game 2, as did Marwin Gonzalez's inability to make a difficult running catch as he slammed into the Green Monster.

During the regular season, the Astros were credited with plus-26 defensive runs saved and the Red Sox minus-31 (although Ultimate Zone Rating has the Red Sox at plus-25.3 runs and the Astros at minus-12.5). Minute Maid provides some unique challenges in the outfield with the angles off the Crawford Boxes in left-center and the shorter power alleys that bunch the outfielders together (although it's 409 to straightaway center). Bregman has been the one defensive stalwart -- Verlander called him a "human vacuum cleaner" -- but let's hope a game turns on a great play made instead of a bad one not made.