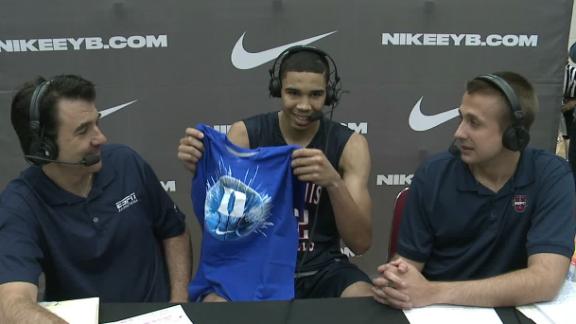 NORTH AUGUSTA, S.C. -- It only took one official visit for Jayson Tatumto know he wanted to be a Duke Blue Devil.

Tatum, ranked No. 2 in the ESPN Class of 2016, announced his intention to attend Duke on Sunday, just after a semifinal game against the CP3 squad at the Peach Jam. He chose the reigning national champion Blue Devils over Kentucky, North Carolina and his hometown school, Saint Louis.

"I love the way the program is run and I love the way the academics are set up," Tatum said of Duke. "My relationships with the Duke coaches were the best, and they made me a priority. They did the best job of recruiting me and have been at almost all my games, and that means a lot."

Tatum's only official visit was to Duke, in February for the Blue Devils' game against Syracuse. He also made unofficial visits to Kentucky and Saint Louis.

A 6-foot-8, 190-pound forward from Chaminade College Prep in Saint Louis, Tatum is a versatile and efficient perimeter player who will give Duke great positional size on the wing, with the ability to be a multidimensional scorer who is hard to guard in the mid-post thanks to his face-up game.

Tatum said he is looking forward to being coached by Mike Krzyzewski.

"I love Coach K's passion to coach his players and to coach the game," Tatum said. "I examined and watched the interaction between him and his staff, along with the players, and was impressed how hard they played."

Duke, which has had five players selected in the first round of the NBA draft in the last 18 months and landed back-to-back No. 1 recruiting classes over that span, is off to another strong start in its recruiting efforts for 2016 after landing the nation's No. 2 player.