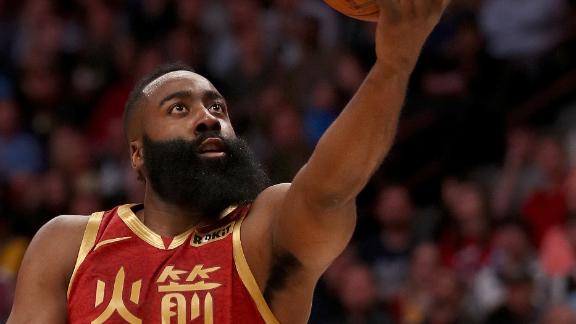 DENVER -- Nikola Jokic had 31 points, 13 rebounds and 9 assists, Malik Beasley had a career-high 35 points and the Denver Nuggets beat the Houston Rockets 136-122 on Friday night.

Houston's James Harden scored 30 points to extend his streak to 25 games of scoring 30 or more points. He needed a late 3-pointer to keep the streak alive, and it came well after the game was in hand for Denver.

The Nuggets couldn't stop Harden, but they ended a nine-game losing streak against Houston.

Harden's streak started with a 50-point night against the Los Angeles Lakers on Dec. 13, and nearly ended on a tough shooting night for the reigning league MVP. He hit five of his first six shots and scored 15 points in the first quarter but then went cold. He missed 10 of his next 11 shots and also missed four free throws.

He hit two 3-pointers in the fourth quarter to pull Houston within nine points, but Jokic scored six straight points to put it away. Harden's step-back 3-pointer with 1:05 left gave him 30.

Torrey Craig had a career-high 22 points for the Rockets, who scored 43 points in the first quarter. The Nuggets responded in the second with a 48-point outburst. They had 35 of those in the final 7:31 when they transformed a five-point deficit into an 83-71 lead at halftime.

Denver led by 20 in the third quarter, but the Rockets got within nine twice before the Nuggets pulled away.

Rockets: Kenneth Faried scored a season-high 23 points against his former team. ... The 43 points in the first period were a season best for a quarter. ... Houston is being careful with guard Chris Paul, who missed 17 games with a hamstring strain, so he will "probably" sit out Saturday's game at Utah, coach Mike D'Antoni said. "It's not definite, but he probably won't play," D'Antoni said.

Nuggets: Denver's 48-point second quarter matched its highest since March 16, 2008, against the Seattle SuperSonics. ... Guard Gary Harris was out due to a right adductor strain. Harris missed 11 games in December with a hip injury and five more in January with left hamstring soreness.

Guard Jamal Murray (left ankle sprain) missed his fourth straight game and probably won't return soon. Murray is known for his ability to play through pain, so there is concern about how long he will be out.

"Jamal is a guy we're not used to see miss games, so you know it's a really serious injury he's dealing with," coach Michael Malone said. "I definitely have concern with Jamal's ankle, but I know that he'll come back ready and he'll help us out moving forward.

Nuggets: Play at Minnesota on Saturday.