'If Boston wins this series, then Joe West is the MVP': Fans at center of controversial call tell all 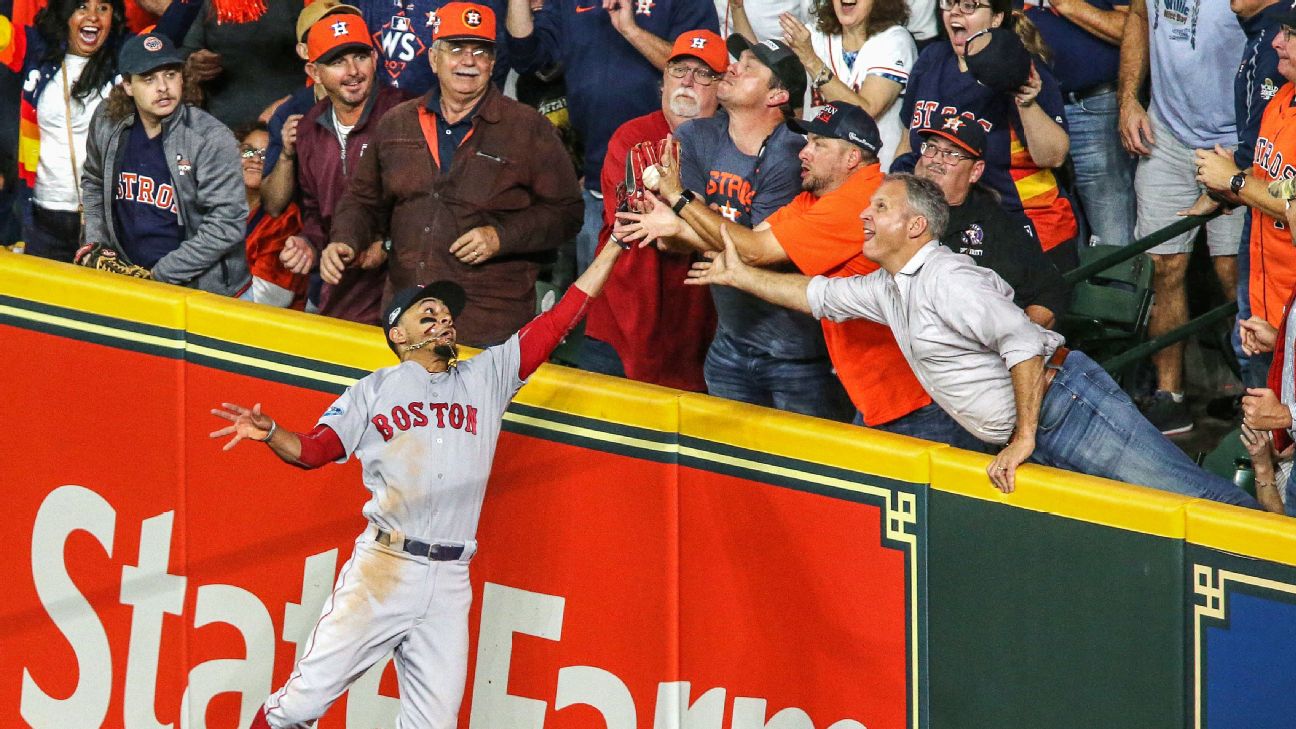 HOUSTON -- The thought has crossed the mind of just about anyone who's ever attended a baseball game: See the ball, try to catch the ball.

For two men, that might be worth rethinking now.

WhenHouston Astrosdesignated hitterJose Altuve connected on a 90.8 mph fastball up and away in the first inning of Game 4 of the American League Championship Series, Troy Caldwell and Jared Tomanek jumped from their seats, sensing an opportunity to secure a home-team home run ball.

Positioned opposite each other on the aisle chairs in the front rows of their respective sections in Minute Maid Park's bullpen boxes, the strangers, both longtime Astros fans, watched intently as Altuve's line drive screamed toward them.

Only one problem. Someone else wanted that ball, too, and with his sights on a World Series ring, he was determined to snag it.

"I was pretty positive I was going to be able to catch it," Boston Red Sox right fielder Mookie Betts said.

Betts' valiant attempt at corralling Altuve's liner became a controversial play in the Red Sox's win over the Astros on Wednesday night. The 8-6 victory pushed the Red Sox into a 3-1 lead in the best-of-seven series, one victory away from the Fall Classic.

Betts sprinted hard to the right-field wall, then went airborne -- jumping well over the 7-foot fence -- in a moment that would link him, Caldwell, Tomanek and a few others clad in navy and orange who also made a desperate stab at the scalded baseball.

"That ball was coming," Caldwell said.

As the ball made its approach into this frenzied corner of an energized crowd of 43,277, those closest to its perceived landing zone settled into position. Approximately 1 foot separated their seats from the edge of the yellow-striped fence.

Tomanek, a 6-foot-4 man wearing a blue shirt with orange lettering on it, hunched his body at the waist slightly. In reading the trajectory of the ball and trying to stay on his side of the wall, he figured that a partial bend was the best way to catch it. To him, it looked like the ball would be landing right at his seat.

Meanwhile, Caldwell, in a bright orange Astros shirt who had to move a couple of feet to his right and into Tomanek's section, extended both his arms. In his mind, the ball was his.

A third man in a dress shirt with the sleeves rolled up, who had been sitting just behind Caldwell, and a fourth man just to the right of Tomanek in a red Astros jersey and orange hat, were also bearing down. All four believed they were outmaneuvering the others for what they assumed was a historic Altuve round-tripper.

But none of them would leave the ballpark with a souvenir. Neither would Altuve be credited with a two-run homer. Just as Betts was opening his glove to snatch the ball from the mass of hands behind him, he felt something.

Those replays, plus Caldwell and his three friends, suggest it was Tomanek's hand.

"I don't think it hit any of us," Tomanek said.

The man in the red jersey, Al Pernitza, a spectator who traveled from Victoria, Texas, with Tomanek and two of his relatives, said if anyone closed Betts' glove, it was the outfielder himself.

"When he was against the wall, the glove automatically closed," said Pernitza, a former high school softball umpire.

In the same split second that Betts' glove closed, the ball ricocheted off it and struck Caldwell's hand. From there, it was back in the field of play, rolling on the warning track as a sprawling Betts regained his footing and launched the ball toward the infield.

"I never touched his glove, I can guarantee you that," Caldwell said. "But I definitely touched the ball. The ball hit me right in the hand.

"I'm so damn ashamed I missed it."

Tomanek deadpanned: "I would've caught that ball, but I played left field in high school, not right."

For about four minutes, confusion reigned as umpires, managers and replay officials tried to determine what had just happened.

As crew chief and right-field umpire Joe West -- who had made an initial call of Altuve being out due to fan interference -- was getting the final ruling back from video replay officials in New York, fans in Sections 152 and 153 were buzzing.

Why isn't Altuve rounding the bases? What could they possibly be replaying? Wasn't that a for-sure homer?

"At first I wasn't worried about it," Caldwell said. "I was like, 'It's a homer no matter what because I'm behind the line when it hit my hand.'

But it was a big deal.

When West was told his call of a fly out via fan interference should be upheld, the bullpen-box sections were livid. For much of the rest of the night, fans there shared their disbelief.

Soon enough, Caldwell was fingered on social media as the fan who interfered with the ball and set the game on a seesaw path that ultimately ended with Houston two runs short.

Instantly, Caldwell's phone lit up. His friends sitting with him also received their share of notifications. People they knew who were watching the game from afar bombarded them with Snapchat direct messages, screenshots of tweets showing where Caldwell was blamed for interfering, and text messages with multiple-angled GIFs of the ball bouncing off Betts' glove and Caldwell's hand.

Ultimately, fearful of retaliation by angry Astros fans -- and a repeat of the infamous Steve Bartman foul ball/interference moment in Chicago in 2003 -- Caldwell left the scene. He figured if he was going to enjoy the rest of this game with his crew, he needed to mask his appearance.

About two innings went by before those with Caldwell heard from or saw him. Part of the reason was how busy his phone had gotten. Interview requests were pouring in. "Good Morning America" was among those who found him, looking for comment.

When the top of Houston's batting order came back up in the top of the third, Caldwell made it back to his seat. A moment prior, Astros center fielder George Springer blasted a no-doubt-about-it leadoff homer about 15 rows up, making the section momentarily forget the earlier brouhaha.

As the celebration died down following Springer's blast, a man in a brand-new, navy Astros sweatshirt, loaded down with food and a fresh beer in his hands, settled back into Row 1, Seat 1.

His biggest concern? Having his name cleared online. Caldwell was adamant in saying he didn't interfere with the ball, and that he remained behind the yellow line.

"If Boston wins this series, then Joe West is the MVP, I'll give you that right now," Caldwell said, echoing sentiments shared throughout that part of the ballpark.

As soon as those words left Caldwell's mouth, he jumped out of his seat, raising his arms in celebration. Altuve had rattled a ball off the left-field wall for an extra-base hit. The double, coming one batter after Springer's homer, had Houston rolling. Later in the inning, Altuve scored to tie the game at 3.

After that, Caldwell declined to speak any further on the matter. When the game ended, he and his friends were led off by a security guard, taken out of the stadium after it had been mostly cleared out. After walking up one aisle and onto the main concourse, the group disappeared.

"What would you do as a fan? I would do the same," Altuve said after the game. "Like, they're trying to catch the ball. I don't have anything against him. He's another Astro fan, he's rooting for us, and I appreciate he was trying to help me."