How J.J. Watt became one of the biggest Cole Caufield superfans 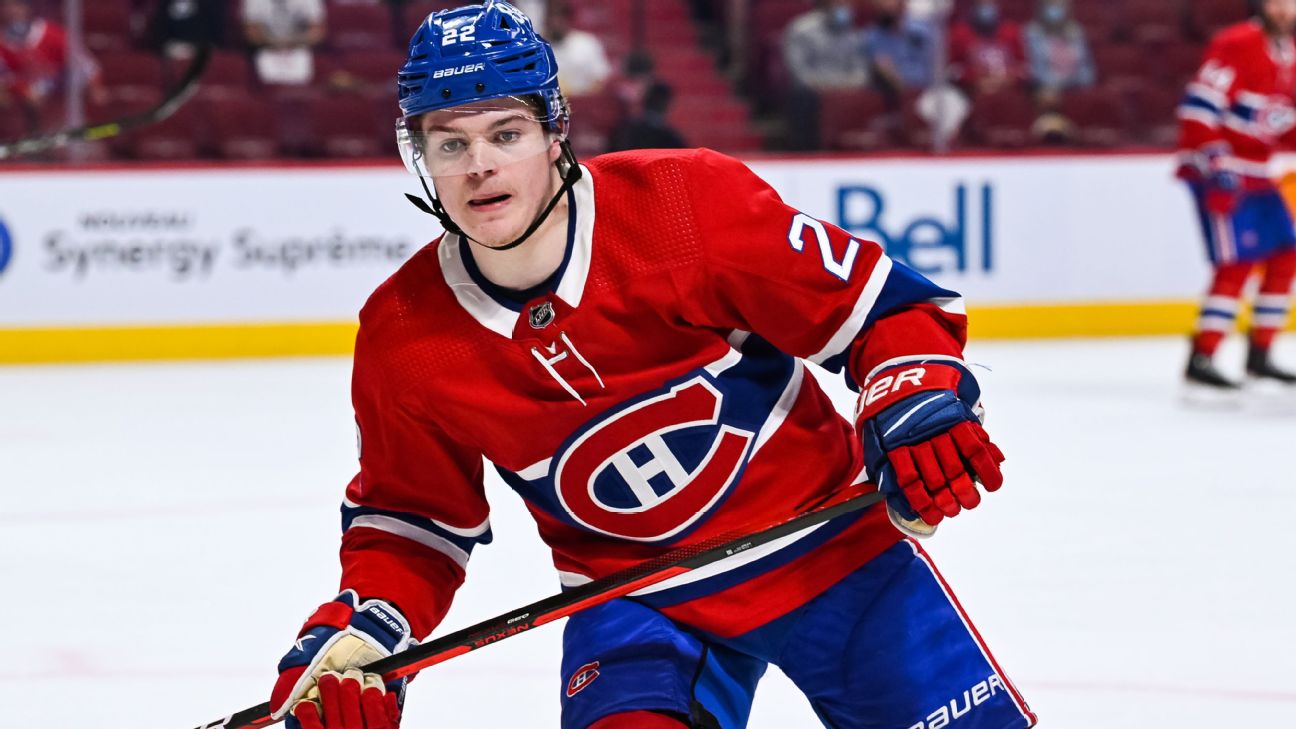 Once Cole Caufield saw the tweet, he immediately texted it to his brother, Brock.

Caufield, the rookie Canadiens winger, had been a healthy scratch for Game 1 of Montreal's first-round series against the Toronto Maple Leafs. That didn't sit well with some fans, including one with 5.6 million Twitter followers:


"I didn't see it right away, but Cole sent it to me," Brock Caufield said. "He was pretty excited. I mean, we grew up idolizing him, especially for who he is as a person. So it was just cool to see."

Caufield drew into the lineup in Game 3. When the 20-year-old scored his first playoff point, assisting on the Canadiens' Game 5 overtime winner, J.J. Watt took to his keyboard again:

Then Watt had something to say again:

Turns out, the five-time All-Pro NFL defensive end is Caufield's biggest fan -- and could have a future in talent evaluation.

"I turned on the games and I was trying to find Cole l because I wanted to watch, and he wasn't in the first two lineups," Watt told ESPN. "And they were down at the time and I'm not saying that I'm like some sort of magic-eight-ball predictor, but they've been pretty good since. So it worked out well to put Cole in there."

The Montreal Canadiens, who were just above .500 this season, continue their unlikely run in the 2021 Stanley Cup playoffs. The Habs have won eight of their past nine games and are tied, 1-1, in the Stanley Cup semifinals against the heavily favored Vegas Golden Knights.

Caufield has become a big part of Montreal's story; the rookie is now a mainstay on Montreal's most productive line alongside Tyler Toffoli and Nick Suzuki, and has six points in 11 playoff games. Meanwhile, Caufield's budding relationship with Watt has become one of the postseason's best subplots.

It's all the more endearing considering Watt, who has 101 career sacks in the NFL, is best known for his power and hulking size. He's listed at 6-foot-5, 288 pounds. Caufield, who is best known for his shifty offensive prowess, is one of the NHL's smallest players, listed at 5-foot-7, 162 pounds.Both were first-round picks; though Watt went at No. 11, Caufield slipped to No. 15 -- mostly because of concerns about his size.

And if you're still unfamiliar with Caufield, who led the NCAA in goals last season, allow Watt to provide a scouting report: "He's quick, he's got great hands. He's got a knack for finding the open guy, he's got a knack for finding the back of the net. He can fire a shot off real quick at any moment. And he's just always around the play -- if there's a goal to be had, he's gonna be in the vicinity of it."

The bond between the athletes begins at the University of Wisconsin, where Caufield and Watt both starred for the Badgers in their respective sports -- albeit a decade apart.

"There's definitely a special connection between Badgers, especially those of us who grew up in Wisconsin," Watt said. "Cole grew up in Stevens Point, I grew up in Pewaukee, and we just know how special it is to put on that red and white, and to represent the Badgers and represent the whole state. So I think it's really cool, and we also can move on to the next stage and do big things there."

Watt hasn't just admired Caufield from afar. The 32-year-old said he has spoken to the NHL rookie "a few times."

"He's a young guy going through his first NHL experience, his first playoff experience and he's having an unbelievable time right now," Watt said. "So it's been cool to offer a little encouragement to see how excited he is, and [I'm] looking forward to watching what they can do here as they work towards the Final."


Watt played competitive hockey until he was 13, and regularly tunes into the Stanley Cup playoffs, which he calls "one of the best playoffs around."

Asked to produce a scouting report for his own career on skates, Watt's answer might surprise.

"Back then I was a lot like Cole -- not necessarily undersized as you can imagine -- but I was the center, I was a goal scorer, I tried to get around the net," Watt said. "You would think that I was a big defenseman, you know, hitting people and everything, but back then I was a little bit smaller and quicker on the ice and was always looking for the net. Nowadays I think I'd be relegated to the blue line and [being] just kind of an enforcer. "

And he'd probably get in some fights.

The winger signed an entry-level contract with Montreal in March, just after his sophomore season ended at Wisconsin. He quickly showed how clutch he can be, becoming the second Canadiens player ever to score multiple overtime winners in his rookie season. Not bad for someone who played just 10 regular-season games.

Because of U.S.-Canada border restrictions, the Canadiens played all of their regular-season games and the first two playoff rounds in Canada. That means Caufield's family hadn't been able to watch Caufield play an NHL game live until Game 1 against the Golden Knights on Monday.

"They've gotten used to the attention a little, but it's also crazy: We're just a small-town family from Wisconsin," Brock Caufield said. "I don't think we'll ever fully get used to it, but it's sinking in now that he's here, and it's just really special."

Brock Caufield was wearing a shirt with his brother's nickname, "Goal Caufield."

"He actually got that shirt, someone sent it to him," Brock Caufield said. "Because of quarantine restrictions, he can't see us. So he actually threw that T-shirt down his hotel window, to me. I wore it at the game, and he scored."

The brothers are close -- similar to the Watt brothers, who all attended Wisconsin as well. Brock Caufield is a rising senior on the Badgers' hockey team.


"I'm 2 years older, and he always played up with me," Brock Caufield said. "So he was always the younger kid, the smaller kid anyway. It didn't really affect him too much. He just got used to it. He never really played with his age group until he got older."

The brothers do everything together. That includes their decision in middle school to take French as a foreign language, when the rest of their friends had all signed up for Spanish.

"There was a coaching change in Montreal at the time, and it was a big deal that the coach of the Canadiens had to speak French," Brock recalled. "So we took French so we could become the coach of the Montreal Canadiens one day. It was kind of a joke, but pretty funny now. It's good because he knows a little bit of French."

That's the other thing about Cole: "He's always smiling," Brock Caufield said. "On the ice he's really competitive, but off the ice he's just a normal kid. Just a really smiley kid. Gets along with everyone."

That now includes their new friend, Watt. The NFL star has imparted some advice -- such as to enjoy every minute of it -- but also knows everyone has their own path as a professional athlete.

And there's no one blueprint for success, though Watt does recommend hard work.

"You kind of have to learn as you go," Watt said. "For Cole there's no better way to learn than by fire. And he's going through it right now in the Stanley Cup playoffs -- one of the best playoff experiences in sports. So he's getting to do it like that, but he also just needs to play his game.

"I mean, he knows what he's doing. I've personally seen everybody try and criticize his size and what he's capable of and why he wasn't ready. But all he does is come in and make assists and he just scored his first goal in the Stanley Cup playoffs, so I think his size will be all right."

Watt isn't plotting a return to hockey anytime soon. However, he has imagined what it would take to make the NHL.

"If you gave me a year of nothing but hockey training, I could at least go out there and be serviceable," Watt said. "But the truth is these guys are so incredible and so skilled at what they do, especially watching these Cup playoffs. I think I probably make a fool of myself out there. But I can say this: I would get one or two good hits in. So at least there'll be something worthwhile to come out of it."

For now, he's fine just being a fan. A really big fan. 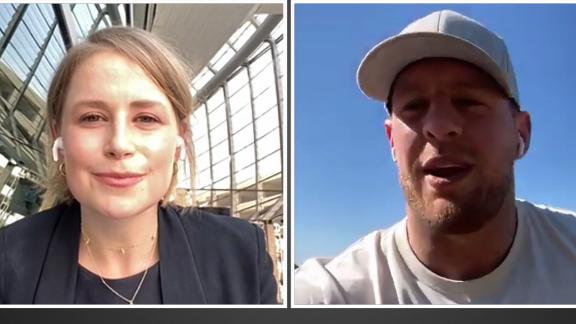 J.J. Watt's advice to Cole Caufield: 'Learn as you go'
J.J. Watt offers advice to fellow Wisconsin Badger Cole Caufield, who's currently undergoing his first season in the NHL with the Montreal Canadiens. 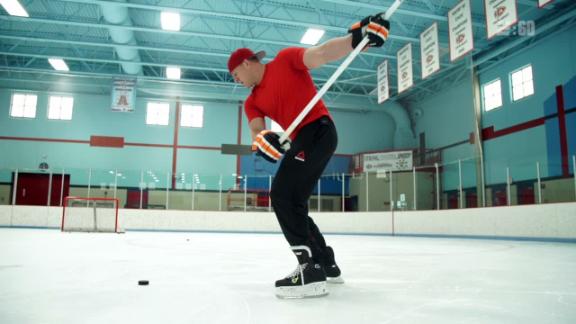