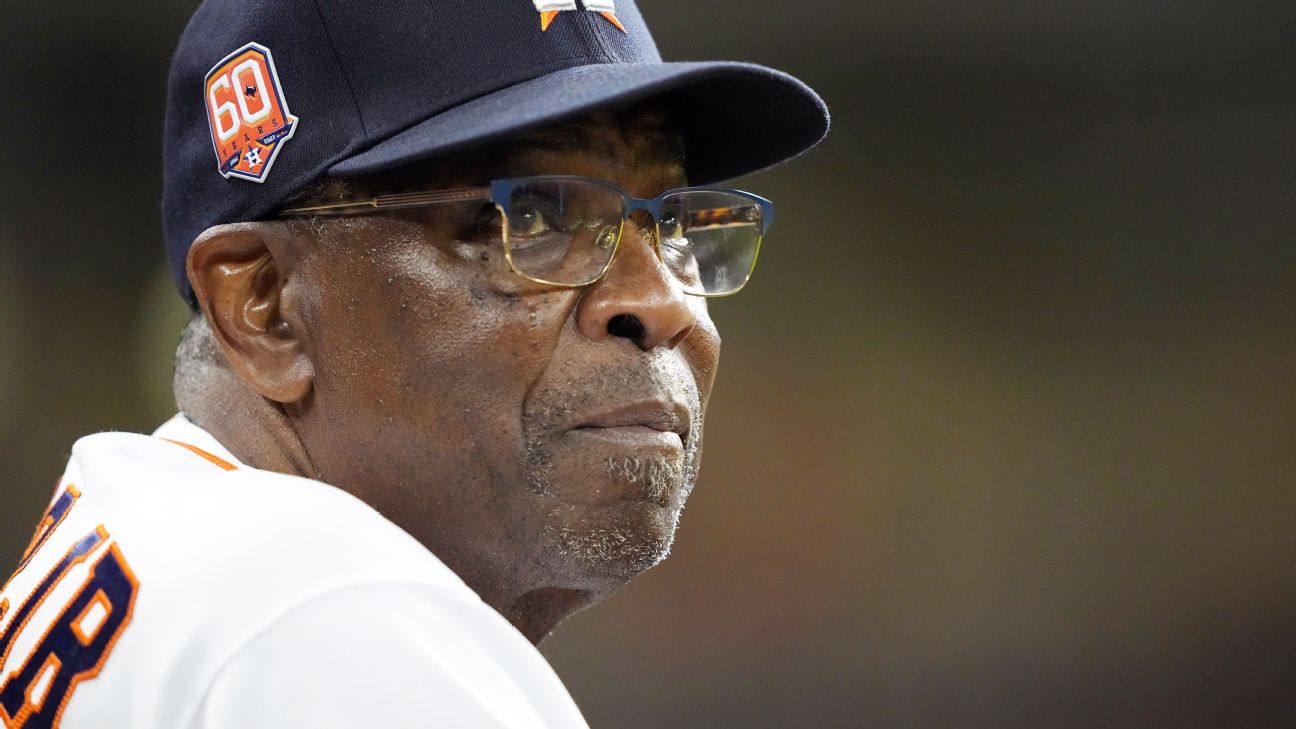 Dusty Baker became the 12th manager in major league history to win 2,000 games -- and the first Black manager to reach the milestone -- with the Astros' 4-0 victory Tuesday night over the Seattle Marinersin Houston.


"I'm probably one of the luckiest men to ever walk on this earth,'' a grinning Baker said minutes after the final out Tuesday.

Baker's players presented him with a bottle of vintage Dom Perignon champagne they signed with a gold marker to commemorate the achievement. The team toasted Baker with far more reasonably priced champagne in the clubhouse after the game.

His wife, Melissa, and a group of about 10 friends were at the ballpark. Melissa Baker smiled as she filmed her husband postgame from the stands as the big screen displayed a picture of him with the words "2K Wins" in huge white letters.

The 72-year-old Baker began his managerial career in 1993 with the Giants, and he has led five different teams -- the Giants, Chicago Cubs, Cincinnati Reds, Washington Nationals and Astros -- to the postseason, the only manager to achieve that feat. He also is one of nine managers to win pennants in both leagues, guiding the Giants to the World Series in 2002 and the Astros in 2021. His 40 career postseason wins are tied for eighth all time with Terry Francona.

With his iconic toothpick and wristbands, Baker has been one of the most vivid personalities in the game over the past three decades -- on top of a 19-year career as a player that saw him finish with 1,981 hits and 242 home runs.

Still, Baker's regular-season success makes him a strong Hall candidate, especially given his track record of turning franchises around -- or, in the Astros' case, lending a steadying presence in wake of the organization's sign-stealing scandal. Consider:

The 1993 Giants went from 72 wins the prior year to 103, although they lost the NL West race to theAtlanta Braveson the final day of the season.

In Cincinnati, Baker took over a franchise in 2008 that had suffered seven consecutive losing seasons and had it back in the playoffs in 2010, also making the postseason in 2012 and 2013.

After he took over the Nationals in 2016, the team improved from 83 wins to 95, and it won the NL East in both of Baker's seasons at the helm.

Finally, he took over the Astros in 2020 after the sign-stealing scandal led to the firing of AJ Hinch. Despite the losses of Gerrit Cole in free agency and Justin Verlander to injury, Baker guided the Astros to the American League Championship Series in 2020 and to 95 wins and the World Series in 2021.

"This should lead straight to the Hall of Fame," catcher Martin Maldonado said.

Added third baseman Alex Bregman: "It's an honor to play for somebody who loves the game and loves his team and is so knowledgeable about the game of baseball and who has had such a storied career. To be able to learn from him, play for him and just to be able to suit up with him every single day is very special and nobody in here takes that for granted."

When the Giants hired Baker, he became just the seventh Black manager in MLB history. After he retired as a player in 1986, Baker initially had no interesting in managing, but he eventually joined the Giants as first-base coach and then hitting coach for four seasons, before replacing Roger Craig as manager following the 1992 season.


He is one of just two Black managers in 2022, along with Dave Roberts of theLos Angeles Dodgers.

"I've just got some unfinished business to take care of," he said at the time of his extension. "We're close. We're getting better every year. I thank the organization for giving us the pieces, thank [general manager] James Click for adding the pieces at the right time and the togetherness we have on this team. I'm very proud to be the team's leader."

If the Astros do win the World Series this season under Baker, it would be another milestone for him: At 73 years of age by World Series time, he would become the oldest manager to win a championship.

Asked where Tuesday's moment ranked, Baker stuck with the present but had an eye on the future. 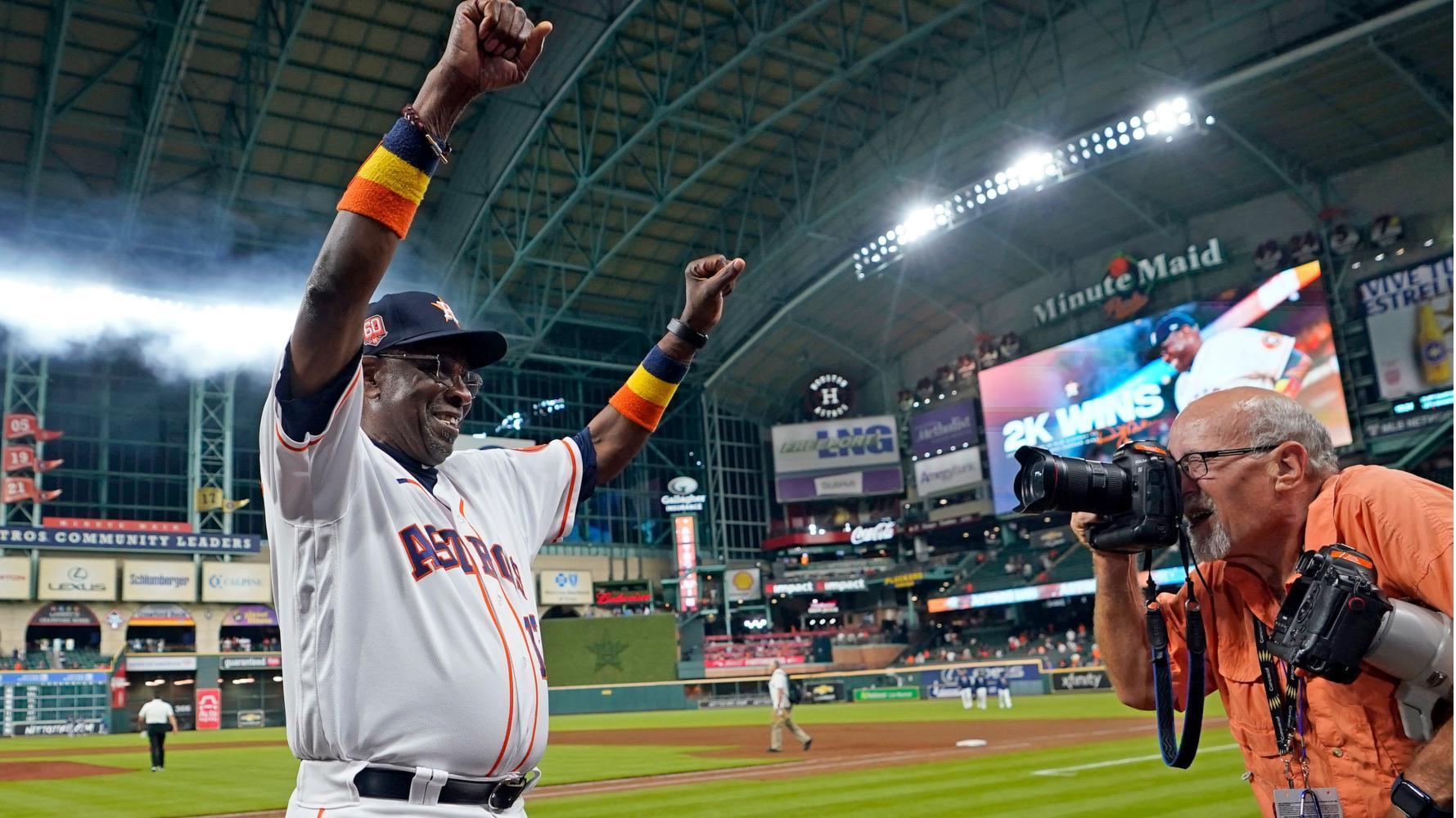