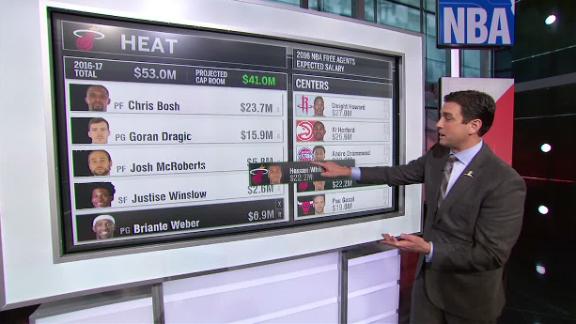 MIAMI -- Pat Riley's pitch to Miami Heat free-agent targets will include an optimistic view of Chris Bosh's potential return to the court next season and the long-term stability of coach Erik Spoelstra, league sources have told ESPN.com.

Bosh is making progress in his recovery from recurring blood clots that have cut short each of his past two seasons, according to a source with knowledge of Bosh's condition. Both Bosh and the Heat continue to work toward the goal of having the perennial All-Star power forward available for the start of training camp, sources said.

Neither Bosh nor the Heat have said publicly where Bosh is in his recovery or whether the 13-year veteran has continued a regimen of blood-thinning medication. Bosh was the Heat's leading scorer and best 3-point shooter when he was sidelined at the February All-Star break and went on to miss the final 29 games of the regular season as well as Miami's playoff run into the second round.

Bosh's $23 million salary due next season will count against the Heat's salary cap regardless of whether he plays, but that salary would come off the books in February if he is unable to play in a game next season and retires because of the medical condition. Last month, Riley said Bosh's status was the "X factor" in determining where the Heat stood entering free agency.

"That is the difficult thing for me in evaluating how far we've come and how good we are," Riley said entering the summer. "It really can't be answered. It can only be answered hypothetically if Chris was healthy. Then you would have a real idea, probably, about how everything would fit."

Meanwhile, the Heat have determined that Spoelstra will be a long-term fit with the roster as the two sides finalize a contract extension that will keep the coach in place for at least the next three seasons. Spoelstra, 45, was set to enter the final season on his contract, but the team had always planned to extend a deal that would grant him a pay raise and increased role in personnel matters, sources said.

Miami has roughly $42 million in salary-cap space, nine free agents to address and a Sunday meeting in New York scheduled in an effort to woo marquee target Kevin Durant to South Florida. Before then, the Heat must determine whether to offer center Hassan Whiteside a contract of $98 million over four years or let the top big man on the market bolt for another team eager extend him a max deal.

Whiteside's journey has been well-chronicled during his two seasons in Miami, where the former second-round pick of the Sacramento Kings landed after he initially washed out of the league and toiled through stints in Lebanon and China.

Riley recently met with Whiteside to set the course for free agency, but the NBA's leading shot-blocker has lined up sessions with the Dallas Mavericks, Portland Trail Blazers and Los Angeles Lakers in the initial hours of free agency. Keeping Whiteside remains among the top goals for the Heat, but Riley is also prepared to pursue secondary options among a group of available centers that include Dwight Howard, Pau Gasol, Joakim Noah, Al Horford, Al Jefferson, Bismack Biyombo and Roy Hibbert.

Whiteside, 27, said last week that loyalty to the Heat wouldn't be a major tipping point in a decision on his future he hopes will crystalize by Friday night. After earning the league minimum of $990,000 last season, Whiteside could command as much as $22 million in first-year salary on his next contract.

"I hope it's an easy decision," said Whiteside, who finished third in NBA Defensive Player of the Year voting and ranked in the top five in blocks, rebounds and field goal percentage last season. "I find it flattering because in my past I was trying to call teams [for tryouts]. Now it's the other way around."

Franchise pillar Dwyane Wade, 34, has privately warned against taking him for granted and has not ruled out exploring opportunities with other playoff teams.

Wade, who has spent all 13 seasons of his career with the Heat, has said for months that his hope is to remain in Miami his entire career. Wade also said he didn't foresee going through another difficult negotiation similar to the one last summer, when his agent and Riley eventually stepped aside as Wade and Heat owner Micky Arison met at Wade's home to hammer out a one-year, $20 million deal.

"But I don't pay myself," Wade said last month after having played in 74 games, his most in five seasons.

This offseason shapes up as the biggest free-agency period Riley and the Heat have faced since James left to return to Cleveland in 2014. Riley insists he's ready for another major offseason challenge, one that includes making the last currently scheduled recruiting pitch to Durant this weekend.

"Why wouldn't I be optimistic?" Riley said recently of Miami's general free agency plans. "Plus we have flexibility this year and next year. To me, the only way you can make a dramatic change in your team is to get a proven superstar, if you can, some way, through free agency. Every now and then, it happens. I think you have to look at it and you have to keep yourself a little bit of flexibility for that to happen."