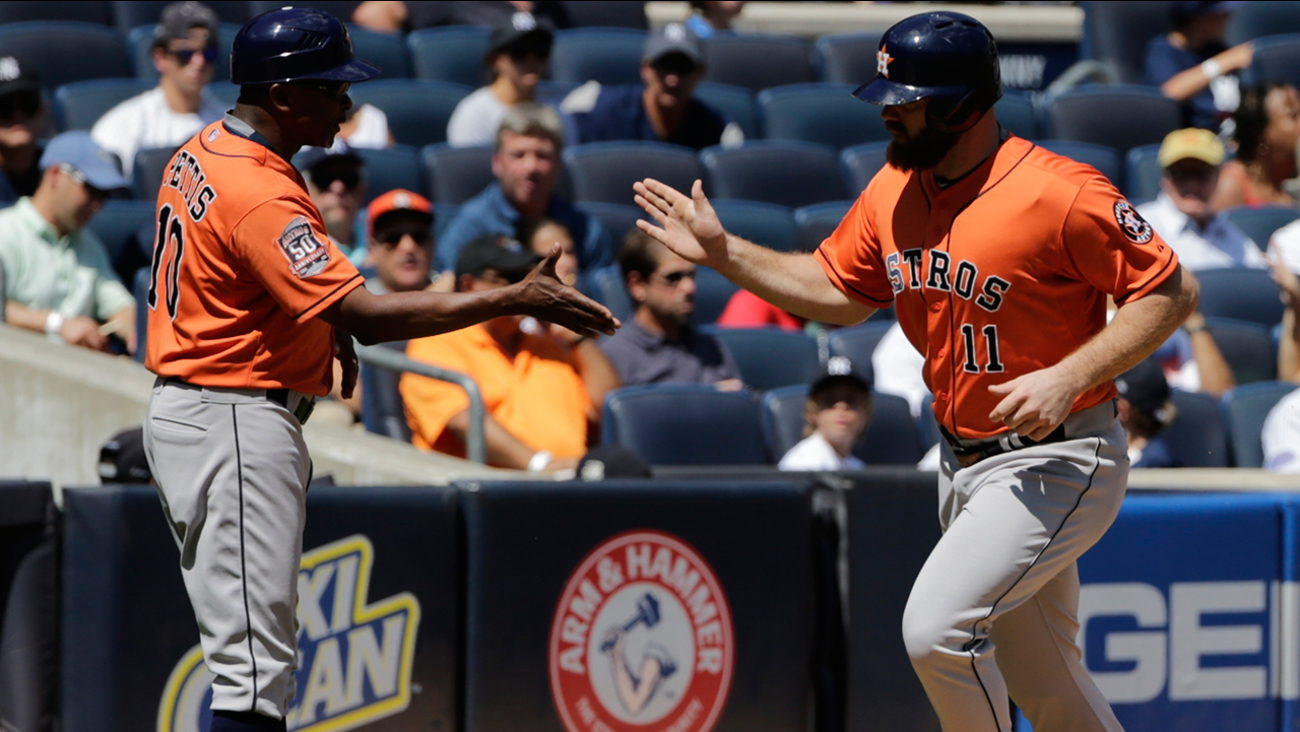 The AL West leaders improved to 71-57, a year after going 70-92. With 34 games left on the schedule, the Astros already have achieved their best season since 2010.

The Yankees have lost five of seven, a slide that's cost them first place in the AL East.

Gattis sliced an opposite-field shot to right in the second inning and launched a long drive into the left field seats in the eighth. His third homer in two days gave him 22 this year and boosted the Astros' major league-leading total to 174.

McHugh (14-7) kept up a recent run of ace pitching, both for himself and the team with the top ERA in the league. Houston has won seven of nine, not permitting more than two runs in any game.

McHugh shut out the Yankees until Didi Gregorius hit a two-run homer in the seventh. He outpitched Michael Pineda (9-8) for the second time this year and has allowed just seven runs in his last five starts.

A day after a 15-1 romp that saw excitable Carlos Gomez get into a dustup with the Yankees, there weren't any signs of ill will between the teams. Houston star Jose Altuve was hit in the shoulder by a pitch in the ninth and merely looked at reliever Nick Goody as he walked to first base.

The power-packed Astros did show off their small-ball side during a four-run fifth that made it 5-0.

Gomez beat out an infield hit and Luis Valbuena followed with a hit-and-run single. Jake Marisnick then bunted for a single, driving in a run as the Yankees got tangled up trying to make a play at first.

Earlier, Altuve stole his AL-leading 33rd base. The Astros top the league in steals, too.

Pineda came off the disabled list after missing nearly a month because of a strained right forearm. New York needs him to do well, especially after putting starter CC Sabathia on the DL this week, but Pineda was tagged for five runs on six hits and a walk in 4 1-3 innings.

Gattis connected off Adam Warren in the eighth for his fifth career multihomer game and second this season.

Astros: OF George Springer (broken wrist) is set to take batting practice Friday at Minnesota. He's been out since early July and, depending on how he feels, could soon begin a minor league rehab assignment.

Yankees: 1B Mark Teixeira and CF Jacoby Ellsbury didn't start. Manager Joe Girardi said they were sore after Tuesday night's game and hoped they would be OK to start Friday night at Atlanta. ... INF-OF Dustin Ackley (back strain) is ready to begin a Triple-A rehab assignment Thursday.

Astros: LHP Scott Kazmir (7-8, 2.39) starts a three-game series at Minnesota. He is 2-3 in six starts since being acquired from Oakland and owns the AL's third-best ERA.

Yankees: RHP Masahiro Tanaka (9-6, 3.61) starts at Atlanta. C Brian McCann, born and raised in Georgia, is looking forward to his first game back at Turner Field as a visitor. A seven-time All-Star with the Braves, he said former teammate Chipper Jones "taught me how to hit at this level" and ace John Smoltz showed him how to call games. McCann said he was eager to spend time with his kids and relax around the pool and grill
Related topics:
sportshouston astros
Copyright © 2020 by The Associated Press. All Rights Reserved.
More Videos
From CNN Newsource affiliates
TOP STORIES