From castoff to 'King Kong': How J.D. Martinez became one of MLB's most sought-after sluggers 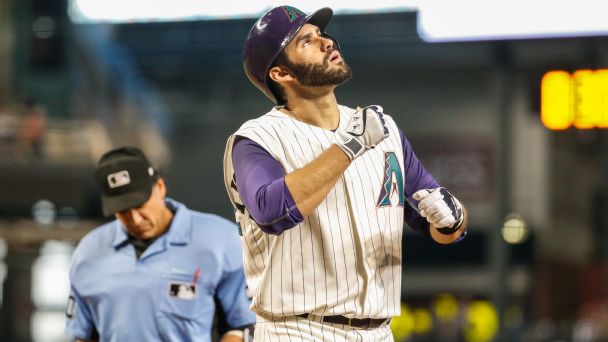 The day after he struck out three times in the final game of the 2013 season, J.D. Martinez walked into a warehouse in Southern California, bat (and hat) in hand. He hadn't met Craig Wallenbrock and Robert Van Scoyoc, but he'd seen their work. And if Martinez knew anything for sure it was that he needed their help.

"He was at that breaking point where he was desperate," Van Scoyoc recalls. "He was willing to do anything."

Three years into his major league career, at 26, Martinez had reached a crossroads. He was a .251 hitter with 24 home runs in 252 games, which doesn't sound so awful until you consider he struck out in 25 percent of his 899 at-bats. He hadn't distinguished himself from the collection of middling outfielders in the Houston Astros organization. And after getting sent to the minors early in 2013 and removed from the 40-man roster after the season, he feared he was in danger of getting traded or even released.

So Martinez put his swing in the hands of Wallenbrock and Van Scoyoc, instructors who preached the value of hitting the ball in the air rather than on the ground long before "launch angle" became hip baseball jargon. They couldn't forestall Martinez's release from the team -- Houston cut ties late in spring training in 2014 after giving him only 18 Grapefruit League at-bats -- but they did succeed at turning him into one of the most prolific sluggers in the game.

Over the past four seasons, Mike Trout and Martinez are the only players to bat .300 with at least 125 home runs, 350 RBIs and a 140 adjusted OPS. Martinez, who turned 30 in August, has slugged .574 and averaged 32 homers per year since 2014. He smashed 31 homers after the All-Star break this past season, leading the Arizona Diamondbacks to a wild-card berth. And now, he's poised to sign a nine-figure contract as a free agent.

Just don't go thinking Martinez -- "the King Kong of Slug," as his agent, Scott Boras, calls him -- is some overnight sensation. It took about a month for Wallenbrock and Van Scoyoc to make him a superstar.

Brown was in his final season as a minor league catcher with the Florida Marlins in 2006 when he met Martinez, a freshman at Nova Southeastern University in Fort Lauderdale. Martinez made an impression with his work ethic, and three years later, he had the numbers to match: .394 average, 142 RBIs and a school-record 32 homers.

All with a swing that made most scouts cringe.

"It was a hands-first kind of swing," says Brown, a first-year Astros scout in 2009 and now Nova Southeastern's coach. "It was a hitch. It was a double load, which is nonconventional. It started and stopped. It's not what most major league swings look like. A lot of [scouts] were like, 'Yeah, that ain't going to work long-term.' But the issue with J.D. was, how do you deny the success?"

That success continued after Brown persuaded the Astros to pick Martinez in the 20th round in 2009. Martinez hit .403 with five homers in 77 at-bats in rookie ball and kept on mashing until Houston called him up in July 2011 -- only 25 months after drafting him -- to replace All-Star outfielder Hunter Pence, whom they traded to the Philadelphia Phillies.

But the veteran scouts were right: Martinez's swing was a problem. Big league pitchers found his weaknesses and exploited them. Over the next two years, the Astros shuttled him back and forth from the minors. Injuries began piling up, too, and it was during a 2013 stint on the disabled list that he had a breakthrough.

Unable to play, Martinez passed time by studying video. During one film session, he noticed changes in then-teammate Jason Castro's swing that resulted in the catcher hitting more balls in the air and having his most productive season. Asked to explain his success, Castro referred Martinez to Wallenbrock and Van Scoyoc.

"And he was out here literally the day after the season ended," says Van Scoyoc, who's based in Santa Clarita, a suburb north of Los Angeles. "He committed to really changing everything."

It began with extensive video study. Martinez arrived by about 10 a.m. each day and stayed until midafternoon. Wallenbrock and Van Scoyoc explained their approach and the concepts behind it, then changed everything about Martinez's swing. They repositioned his hands and taught him to be athletic rather than stationary. Most significantly, they got him to keep his bat on a plane in the hitting zone for as long as possible, maximizing his chances of making hard contact.

As Brown describes it, Martinez's swing went from a "V" shape to a Nike swoosh.

But it wasn't enough for Martinez to alter his mechanics. He needed to change his mindset, too. Wallenbrock and Van Scoyoc produced stats that showed hitters are more successful when they get the ball in the air. They introduced him to "launch angle," the measurement of a ball's vertical trajectory off a bat. And they drilled Martinez to consciously think about adding loft to his swing.

"We know from an outcome standpoint we want the ball to be struck in the air," Van Scoyoc says. "The angle that he swings on [since 2013] is designed to where, if he makes that hard contact, it will be something hit hard with a trajectory that goes up in the air."

It's a philosophy that runs counter to many traditional beliefs about hitting.

For years, players were taught to swing on top of the ball and hit line drives. As long as pitchers kept the ball down, they usually had success. Hitters relied on taking advantage of mistakes that usually took the form of pitches left up in the zone.

Wallenbrock has taught the fly-ball approach for decades. But it wasn't until the advent of drug testing, when offense took a nosedive, that the revolution truly took root. Marlon Byrd, Josh Donaldson and Justin Turner were among the earliest converts. Van Scoyoc, a Wallenbeck protégé whose playing career ended in college, is proud to spread the gospel. The Los Angeles Dodgers even hired him and Wallenbrock as consultants, and their effect on Chris Taylor, in particular, is profound.

To Martinez, it was like finding the key to a buried treasure. He just needed to unlock it.

After about a month in Southern California, Martinez traveled to Venezuela for winter ball and hit six homers in 93 at-bats. He felt revitalized at the plate, so much so that even after the Astros released him, he believed he would succeed with whatever organization picked him up.

"I'm sure there was a degree of disappointment," Van Scoyoc says. "But as far as his confidence in the batter's box, we really felt it was going to be Houston's loss to not give him the chance."

At the recommendation of assistant general manager Al Avila, the Detroit Tigers came calling. Martinez began the 2014 season in Triple-A and hit 10 homers in 65 at-bats. He got called up in late April and became the most consistent member of a powerful Tigers offense that featured Miguel Cabrera, Victor Martinez and Ian Kinsler.

The improvement was easy to see. In three seasons with the Astros, Martinez hit only 33.8 percent of balls in the air. Over the past four seasons, he increased that number to 40 percent. Not coincidentally, he is one of only four players (Trout, Anthony Rizzo and Nelson Cruz are the others) with at least 20 homers and an adjusted OPS of 130 in each of the past four years.

"I always thought the perfect swing was a line drive [back to] the pitcher," Martinez told Fangraphs earlier this year. "I'd go out there and hit the ball perfectly, and it's [a] single. Why is my perfect swing a single? To me, the numbers don't lie. The balls in the air play more."

Through it all, Van Scoyoc has been a constant presence. He's in touch with Martinez on a daily basis, usually after games, to break down his at-bats and study the next day's pitcher. They spent considerable time together in Phoenix after Martinez got traded to the Diamondbacks in July. They have become the best of friends. Martinez was even in Van Scoyoc's wedding.

And the team that signs Martinez will most certainly get Van Scoyoc, too. Like any other player, Martinez works with his team's hitting coaches. But he doesn't hide his relationship with Van Scoyoc, who likens himself to a golfer's swing coach.

"J.D. has been very upfront the last couple of years that, 'Hey, this is what makes me successful and this is what I'm going to be doing, so I need you to get on the same page with me,'" Van Scoyoc says. "Obviously that can lead to conflict, but I think on the player's interest, it makes sense for them to have outside coaches that they talk to, that they trust and that they feel like they can confide in."

For teams that need an offensive jolt, the question now is whether Martinez and his overhauled swing are built to last. If, say, the power-starved Boston Red Sox take the five- or six-year plunge for about $25 million per season, will Martinez remain a middle-of-the-order force for the bulk of the contract?

Unsurprisingly, Van Scoyoc offers an enthusiastic yes. For one thing, he notes that Martinez has maintained his level of production despite attempts by pitchers to elevate their fastball as a way of forcing him to swing down on the ball. The secret, Van Scoyoc says, is tailoring Martinez's swing path to the type of pitcher he's facing in a given at-bat.

So while it's inevitable that Martinez's bat speed will slow as he ages, Van Scoyoc believes his diligence in studying pitchers' tendencies and ability to adjust his swing accordingly will allow him to continue getting hits and driving in runs.

That, Van Scoyoc says, is the beauty of the new-age hitting philosophy to which Martinez committed when he first walked into that batting cage in Southern California.

"J.D. deserves all the credit in the world for being willing to buck what got him to the big leagues and go, 'All right, let's evolve,'" Brown says. "It's an anomaly in the game, but it shouldn't be. When J.D. learned his new swing, he trusted that this was what was going to get him to the next level. He believed in it."