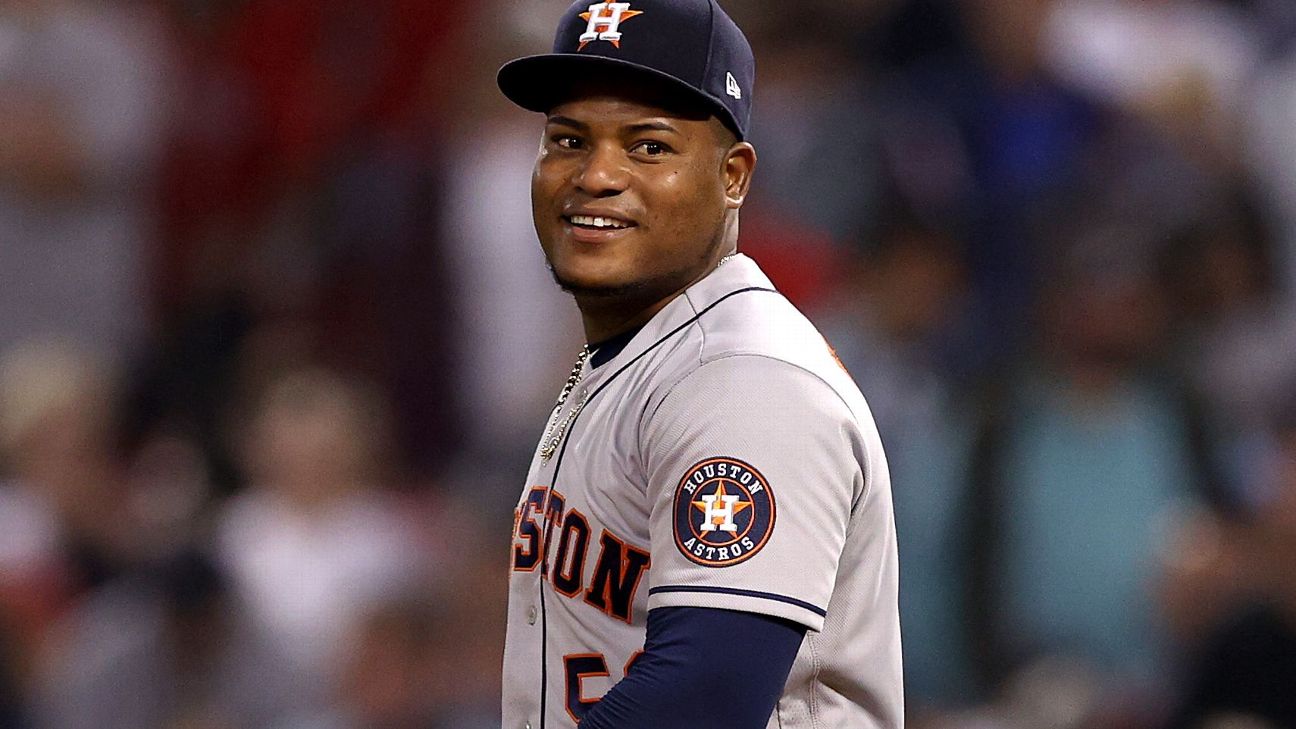 BOSTON -- As Houston Astros manager Dusty Baker walked out of the dugout in the middle of the fifth inning, Framber Valdez felt surprised.

Entering the fourth inning, Valdez was no-hitting Boston, rolling through the Red Sox lineup as Houston clung to a 1-0 lead in Game 5 of the American League Championship Series. But a single by Boston third baseman Rafael Devers broke up the no-no bid and a hit-by-pitch of designated hitter J.D. Martinez increased the inning's stakes with Boston's go-ahead run standing on first base.


Valdez turned toward the bullpen as Baker approached the mound, checking to see if a reliever was warming up behind him.

He saw nobody there.

"All right," Valdez said to himself. "Well, this is all right."

With the balance of the ALCS hanging, Baker pulled his pitcher in close.

"Frambioso," Baker said. "Man, you're the best. Just be natural and just do your thing."

Valdez lived up to the word of his skipper, inducing a double play from Red Sox right fielder Hunter Renfroe and escaping the inning's trouble by getting Boston left fielder Alex Verdugo to sharply ground out to first baseman Yuli Gurriel.

The moment represented the most tenuous for Houston on the evening as Valdez cruised through eight innings, allowing three hits, one run while striking out five and walking one in the most important start of his career, becoming the second visiting starter to go eight or more innings and allow three or fewer hits in a playoff game at Fenway, joining Bob Gibson, who accomplished the feat in Game 7 of the 1967 World Series.


"I just have to give thanks to God, first of all," Valdez said through a translator. "I've asked God so much to be able to be part of this team and to be able to help out this team in a manner, to have them on my shoulders. I am going to keep working to maintain it like that."

The start represented a moment of redemption. Valdez struggled through his first outing in Game 1 of the ALCS, going 2.2 innings, allowing six hits and two earned runs while walking three batters and striking out two. After the outing, Valdez told his teammates that he would go at least seven innings in his next start to make up for his poor performance.

"I felt humiliated after that first outing," Valdez said. "I set my mind on not letting that happen again."

In the process, he became the first Astros pitcher to complete eight innings in a postseason game since Gerrit Cole went the same distance against the Rays in Game 5 of the 2019 ALDS. Coming into Wednesday night's contest, Baker hoped Valdez would command his entire arsenal of pitchers, generate ground balls in order to improve his performance while not forcing his breaking ball on his hitters. Baker got exactly what he wanted. Valdez leaned on his sinker -- which averaged 93.7 mph -- throughout the course of the evening, accounting for 65 percent of his 93 pitches on the evening.

The Astros starter received seven of his 12 swings-and-misses on his curveball, which he located with precision throughout the performance, the longest start by a pitcher in the postseason this year.

"Seems like he put [the Game 1 start] behind him," Baker said. "He had a good tempo going. He didn't mess around forcing that breaking ball, like he had the last couple starts, and then getting behind, he was attacking the strike zone."

Following Boston's strong offensive performances in the first three games of the series, the Red Sox struggled to generate opportunities to strike back at the Astros. The team's only run game in the seventh inning on a laser home run by Rafael Devers, which brought the score to 7-1.


"Their guy was amazing," said Red Sox manager Alex Cora. "He was throwing harder than usual. The ball was moving. We didn't hit the ball hard at all. ... Credit to him. His sinker was unreal tonight. Unreal. You tip your hat to him and you move forward."

Valdez credited his mindfulness practices after the game as one of the factors in his strong performance. After he returned to the dugout following the rocky start to the fifth inning, Valdez closed his eyes and began meditating, which he turns to when he needs to mentally reset. The process, which he started with his psychologist Andy Nuñez in the Dominican Republic, helps him control his emotions and visualize the success he hopes to achieve on the mound.

"That's something that every time that I've used it, it's worked for me 100 percent," Valdez said. "My emotions don't get out of hand. I don't get in an altered state at all and I feel totally focused on what I need to do. That's something I have been working on a lot and something that really centers me and allows me to be calm out there."

The start from Valdez puts Houston in control of their destiny as they head back home with two opportunities to clinch a World Series berth in front of their fans at Minute Maid Park. A victory in Game 6 or a potential Game 7 would mark the third World Series appearance for Houston in the last five years, with the last two coming in 2017 and 2019.

In order to take control of the series and neutralize the potent Boston offense, the Astros needed a career-best start from their starting pitcher.

"This was in the hands of Framber," Baker said.

And in his hands, the Astros now find themselves one win away from a chance at the franchise's second World Series title. 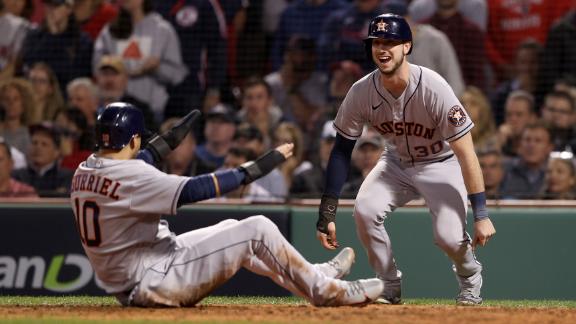