Final 2019 NFL MVP rankings: Lamar Jackson is obviously No. 1, but who follows? 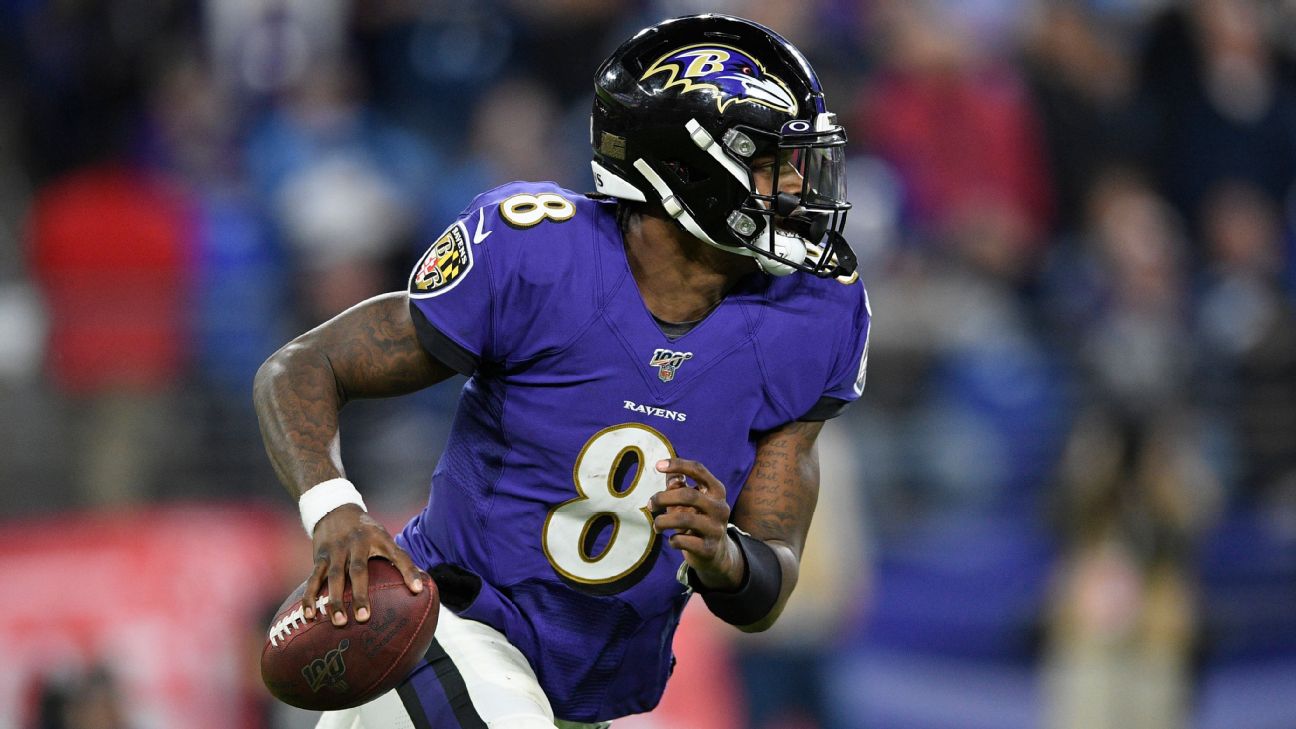 A little more than two weeks from now, on the night before Super Bowl LIV kicks off, the NFL will crown the MVP of the 2019 season. A competition that emerged early as a three-quarterback race only to soon become the Lamar Jackson Award highlights the changing of the guard at the QB position. To that end, three signal-callers under the age of 25 finished in the top five of our final MVP poll for the season.

While all five top finishers made the postseason, only one remains in the hunt for the Super Bowl. But the MVP is of course a regular-season award, and though Jackson appears a lock to win the award, many others made serious campaigns for the honor. Let's look back at the moments that bolstered the MVP campaigns of a handful of superstar players and those who found their way into the conversation.

First, our process: A panel of eight analysts -- Matt Bowen, Mike Clay, Courtney Cronin, Jeremy Fowler, Dan Graziano, Mina Kimes, Kevin Seifert and Field Yates -- voted on their top 10 MVP finalists this season. We use those eight sets of rankings to get our top candidates overall, using Heisman Trophy-esque scaling for each ranking. Here are the results, starting, of course, with Baltimore's elite playmaker.

Jackson emerged as the front-runner for the MVP award by Week 10 and separated himself from the pack in every game that followed. Few NFL teams could figure out how to beat him this season. Putting a spy on the QB rarely worked. No type of coverage slowed him (61.4% completion percentage vs. man coverage, 70.7% completion percentage vs. zone). The Patriots' No. 1 defense couldn't even contain him. Simply put, Jackson reshaped the way teams play defense.

His MVP moments were endless. He broke Michael Vick's mark for single-season rushing yards by a quarterback. His 36 passing touchdowns beat Vinny Testaverde's record for the most thrown in a season in Ravens history. He became the first quarterback to have 3,000 passing yards and 1,000 rushing yards in a season. All of this came two years after he was drafted 32nd overall by a team that wasn't looking to change what made him great and now has one of the greatest seasons ever by a quarterback to show for it. Jackson is the no-brainer league MVP for the 2019 season.

Wilson won't win the prestigious award but by definition was the MVP in so many ways. Seattle, with a rash of injuries on offense and its 26th-ranked defense, would have been nothing without its superstar quarterback. Unlike Jackson, Wilson didn't have the backing of a great offensive line, a versatile tight-end group, shutdown corners or high-end special teams. Yet he managed to lead a career-best four fourth-quarter comebacks and five game-winning drives.

Wilson's value to his franchise was incomparable during a time when Seattle was shifting from defensive juggernaut to offensive powerhouse, and he had the Seahawks in the running for the No. 1 seed in the NFC playoffs down the stretch in December. Wilson rewrote his legacy this season and solidified himself as one of the elite quarterbacks in the game.

No receiver has been named the MVP, but New Orleans' superstar wideout did more than make his case. Thomas broke Marvin Harrison's record for catches in a season, a mark that stood for 17 years (Thomas had 149, six more than Harrison), and his 1,725 receiving yards are seventh-most in NFL history. The Saints' explosive offense ran through its top weapon, who caught an eye-popping 80.5% of the passes thrown his way, according to NFL Next Gen Stats.

Most impressively, Thomas did all of this on a team that didn't have its starting quarterback for five games (and still compiled a 13-3 record). Thomas' season puts him in line to earn the Offensive Player of the Year award, which has been claimed by a wide receiver only two times (Jerry Rice last earned the honor in 1993).

Mahomes entered the season as the favorite to repeat as MVP, and though a dislocated knee forced him to miss Weeks 8 and 9, the Chiefs quarterback reentered the conversation upon his return by leading Kansas City on a six-game winning streak to end the regular season. In his first game back, a loss at Tennessee in Week 10, Mahomes threw for 446 yards and three touchdowns.

The 23-year-old's second year as the Kansas City starter helped solidify a changing of the guard at the quarterback position: Jackson, Mahomes and Deshaun Watson all took down Tom Brady and the Patriots during the season.

Whether it was throwing a touchdown pass to beat the Raiders while getting kicked in the eye or leading a come-from-behind win over the Colts to earn the top spot in the AFC South or beating Brady and the Pats with a three-touchdown performance in primetime, Watson proved that he can be Superman when his team needs him to be. With five game-winning drives in 2019, he thrived in pressure moments and outperformed just about any slow start or team deficiency.

Christian McCaffrey, RB, Carolina Panthers: Another player who defines the term MVP, McCaffrey was the Panthers' offense -- every last bit of it. He became the third player in NFL history to have 1,000-plus rushing yards and 1,000-plus receiving yards in a season and demonstrated a consistent ability as a dual-threat force for a team that lost Cam Newton to injury early. McCaffrey played 93.4% of offensive snaps, broke his own record for receptions by a running back (116), finished with the third-most yards from scrimmage (2,392) by any player in a season and totaled 19 touchdowns.

Ryan Tannehill, QB, Tennessee Titans: Imagine if the Titans had started Tannehill from the beginning of the 2019 season instead of waiting until Week 7 to switch from Marcus Mariota? Tannehill led the league and set franchise records with a 117.5 passer rating and 9.6 yards per attempt. In Week 14, he joined Packers quarterback Aaron Rodgers as the only players in NFL history to complete at least 75% of their passes with a 130-plus passer rating (minimum 10 attempts) in three consecutive games in a season. He also joined Wilson as the only two players in history with four consecutive games with at least two passing touchdowns and a passer rating of 125 or higher.

Drew Brees, QB, New Orleans Saints: Brees redefined what's possible for a quarterback at 40 years old. After missing five games due to a thumb injury, he broke Peyton Manning's record for career touchdown passes (547) and set the NFL's single-game completion percentage record (96.7%) in a blowout win over the Colts. His accuracy was unmatched yet again, as he led the NFL in completion percentage (74.3%) while throwing 27 touchdowns with just four interceptions.

Stephon Gilmore, CB, New England Patriots: The 29-year-old cornerback finished the season having surrendered just one touchdown, and he led the NFL with six interceptions and 20 passes defended. Gilmore consistently shut down one side of the field while shadowing his opponent's top receiving threat, stifling the likes of DeAndre Hopkins, JuJu Smith-Schuster, Tyreek Hill, Amari Cooper and Odell Beckham Jr. and allowing a 47.4 passer rating into his coverage. He had one of the best seasons in recent history by a defensive back and was very much the catalyst for the Patriots' top-ranked defense. Gilmore should be at the top of the list for the league's Defensive Player of the Year award, which hasn't been won by a defensive back since Troy Polamalu won it in 2010. 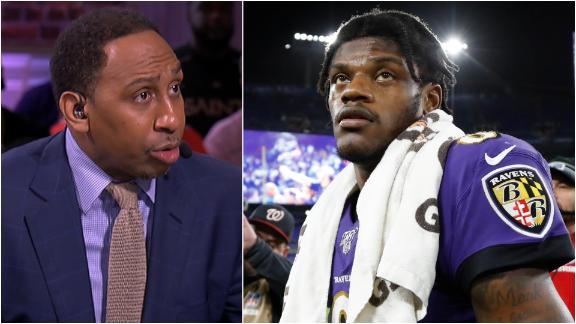 Stephen A.: Lamar wasn't perfect, but he wasn't to blame
Stephen A. Smith admits that Lamar Jackson wasn't perfect against the Titans but gives more blame to John Harbaugh for the Ravens' loss. 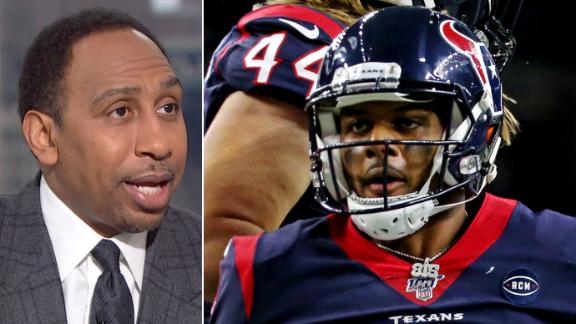 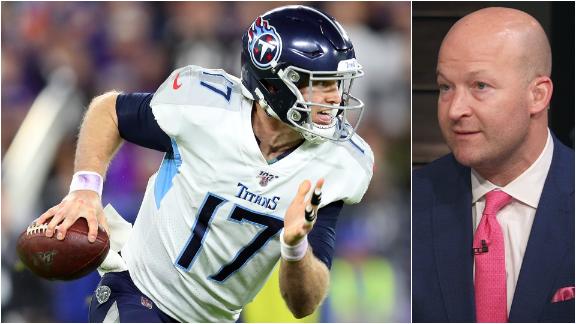