ESPN
By David Schoenfield
HOUSTON -- The Boston Red Sox would like to remind everyone: Never underestimate a team that won 108 games.

David Price would like to remind everyone: It's never too late to change the labels placed upon you.

Behind a brilliant outing from Price -- thanks to a dominating changeup that kept the Houston Astros flailing helplessly for six scoreless innings -- the Red Sox eliminated the defending champions with a 4-1 victory in Game 5 of the American League Championship Series to earn their first World Series trip since 2013.

Calling this an upset isn't exactly fair, not when the Red Sox set a franchise record for wins and won the most games in the majors in 17 years. Still, the Astros were favored to win the series, and after Houston won the first game when the Red Sox blundered their way through 10 walks, three hit batters and an error, many doubted the series would return to Fenway.

They were right. It won't return. The Red Sox became the first team to sweep three road games in a league championship series since the 2005 White Sox and will now have four days to rest up before the World Series begins on Tuesday in Boston.

"We have 108 wins. Two or three guys don't do that," J.D. Martinez said as champagne corks popped in the background in the happy clubhouse. "It's a full team. This whole series, this whole playoffs, has been a display of that. We've been doing this all year. On this stage, it's just a bigger platform."

Price, who finished with nine strikeouts and no walks, pitched on three days' rest and after warming up in the eighth and ninth innings Wednesday night in Game 4. He entered with a 6.16 ERA in the postseason as a starter, the third-worst ERA for anyone with at least 10 playoff starts. He left with his first career playoff win as a starter.

Price said his final thoughts before going to sleep Wednesday were about making good pitches. "Last night, I envisioned myself doing this right here," he said with a look of joy and relief mixed in with sweat and drips of champagne. Asked about his family waiting outside the clubhouse, he paused, emotion filling his voice: "That's my rock."

Price relied heavily on his hard changeup that dives down below the knees when he's on. He threw it 39 times out of 93 pitches -- a 43 percent rate of changeups that exceeded any start in his career. And, boy, did it work. He induced 12 swings-and-misses on the changeup alone, which matched the highest swing-and-miss total for any game -- on all pitches -- in his postseason career. On those 39 changeups, the Astros missed 12, fouled off 12, chased 16 that were out of the strike zone, and put just five in play.

"It was good," Price said of the pitch. "It was good in the bullpen, warming up, it got better as the game went on. Made some adjustments with it, I think, after the fourth inning and it was huge."

Meanwhile, Astros starter Justin Verlander had entered with a streak of 24 consecutive scoreless innings in postseason elimination games. He stretched it to 26 before Martinez crushed a 1-2 curveball over the Crawford boxes and off the ConocoPhillips sign in left field in the third inning, a 105 mph rocket estimated at 396 feet. In a series where most of the breaks seemed to go Boston's way, Verlander's 0-2 slider to Martinez had a strike probability of 84 percent, but plate umpire Chris Guccione ruled it a ball. This umpiring crew won't be receiving any free meals in Houston.

Three innings later, Rafael Devers struck the decisive blow with a three-run home run off Verlander. Mitch Moreland led off with a double off the short porch in left field, inches over the glove of a leaping Tony Kemp, a ball that had just a 4 percent hit probability, via Statcast data. Ian Kinsler, a bit of a surprise starter at second base, hit a hard grounder into right field to put runners on the corners.

Devers followed, swinging at the first offering, a 98 mph fastball at the top of the strike zone, lifting a towering fly ball to left-center that snuck into the corner of the Crawford boxes, a mere 359 feet away. Indeed, the Crawford boxes hurt the home team on this night: Given neutral weather, that's not a home run in any other park.

Price's final inning, the sixth, started by getting Alex Bregman on a fly ball to right field. You can argue the series turned when the Red Sox started pitching to Bregman -- instead of walking him -- and getting him out. In his final 11 plate appearances, Bregman went 0-for-10 with a hit by pitch. Three of the biggest outs of the series came against Bregman:

(1) His game-ending fly ball in Game 2 at Fenway against Craig Kimbrel that nearly tied the game, but instead was caught by Andrew Benintendi just in front of the Green Monster.

(2) His line out to center field in the seventh inning of Game 3, with the Red Sox holding a 3-2 lead and the tying run at second.

(3) The dramatic final out of Game 4, when Benintendi's do-or-die diving catch with the bases loaded secured the win for the Red Sox.

This isn't to knock Bregman, but points to the importance of the Red Sox needing -- at some point -- to get him out. It's also a reminder of the intense nature of playoff baseball. If any of those three outs go the other way, who knows how the series twists and turns.

There was also the matter of getting the final nine outs. Matt Barnes got two of them, and then Alex Cora turned to Game 3 starter Nathan Eovaldi. Like everything else Cora has done this postseason, it worked out perfectly as Eovaldi got the final out of the seventh and worked around a two-out single in the eighth, retiring Jose Altuve on a hard liner to center.

That was it for Eovaldi. Cora didn't want to burn him for too many pitches. "There was a chance that there was a Game 7," Cora explained. "And we needed to be prepared for that. We knew the skinny guy [Chris Sale] was ready for Game 6, but in case there was a Game 7, it was going to be [Eovaldi]. And no way I'm going to push him to lose him and then lose the game."

So he turned to Kimbrel, who had been 4-for-4 in save chances in the postseason -- but allowed runs in all four appearances and had thrown 35 pitches in Game 4.

"Absolutely I expected to get the call," Kimbrel said. "I felt great. Watched some video. Got back on line."

Kimbrel struck out Carlos Correa and Marwin Gonzalez around a walk to Yuri Gurriel ,and then Benintendi hauled in Tony Kemp's drive to left-center for a slightly less dramatic final out than he had made the night before. "He tried to give me the ball after the game, but I told him he needs to keep it," Kimbrel said.

The victory meant that Cora won two games on his birthday -- Game 4 had ended after midnight and Cora turned 43 on Thursday. "That's pretty awesome," Kimbrel said with a laugh. "I don't know how many times he's gonna be able to say that again."

In the end, Benintendi's catch and Mookie Betts' throw and the cheating controversy and the fan-interference controversy and Devers' Crawford boxes home run all will be remembered with fondness or anger. The lasting image, however, will be Cora giving Price a big hug in the dugout after his final out.

I think all of New England joined in. 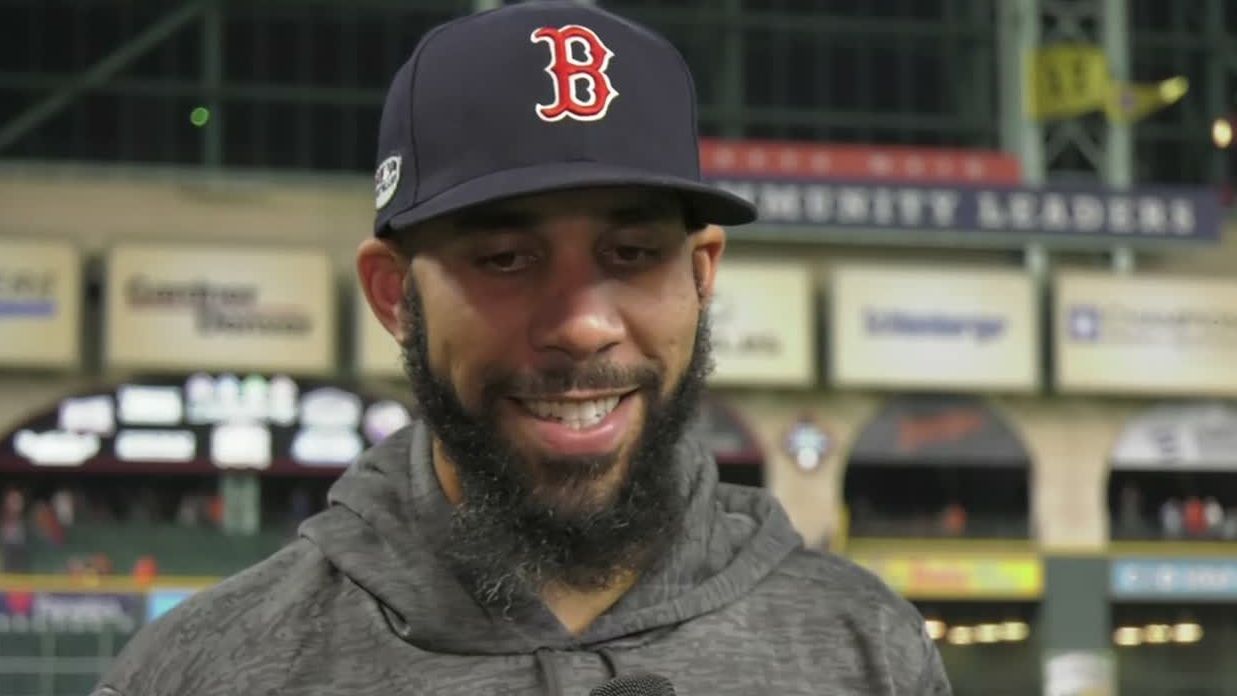 Price: Getting Boston to World Series 'means a lot to me'
David Price says he found something in the bullpen in Game 4 that carried into Game 5 and discusses what it means to get to the World Series.