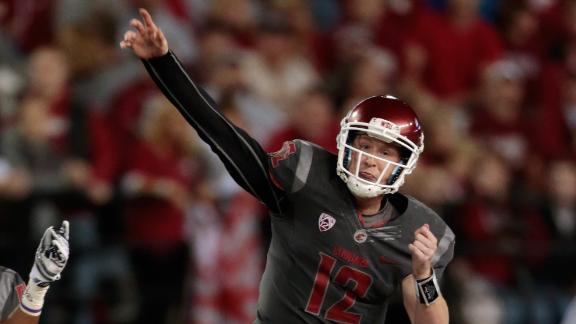 He picked up the record on a 17-yard pass to Vince Mayle on the game's final drive, but the Cougars missed a chip-shot field goal as time expired to lose 60-59.

David Klinger set the previous record (716 yards) in 1990 against Arizona State in a game played in Tokyo.

Halliday wasn't the only quarterback who had a big game. Cal's Jared Goff completed 47 of 53 passes for 527 yards and five touchdowns, also without an interception.

Goff and Halliday almost set a new mark for passes attempted without an interception. That came in 2012, when Louisiana Tech (52) -- coached by Cal coach Sonny Dykes -- and Houston (77) combined for 129 passes without a pick.

If there were a game to predict this type of production, this was it. Halliday came into the game with eight 400-plus yard games over the past two seasons and threw for over 500 yards in two games this year. Goff threw for 458 yards last week and threw for 504 yards against Washington State last season.

Sam Durley, of Division III Eureka (Ill.) College, owns the NCAA single-game mark with 736 passing yards in his team's 62-55 win against Knox in 2012.