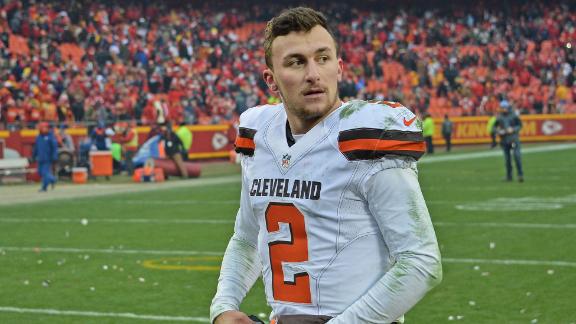 TORONTO -- Johnny Manziel would be welcome in the Canadian Football League, commissioner Jeffrey Orridge said in a recent interview.

Manziel, however, would need to assure the league that he would be an appropriate fit for its culture.

"We try not to speculate on situations like that," Orridge told ESPN, "and I really can't speculate too much on hypotheticals. But I can tell you that what's paramount to us is ensuring the success of an athlete, while at the same time preserving and promoting the integrity of the league and the game."

Manziel has not signed with an NFL team since the Cleveland Browns released him in March, and he would have to serve a four-game suspension for violating the league's substance abuse policy if he did return to the NFL.

In the meantime, social media and tabloids have been flooded with reports of wild parties involving Manziel, and the 2012 Heisman Trophy winner has appeared underweight in recent photographs.

There is no indication that Manziel is planning a return to football, via the NFL or elsewhere. But he is on the Hamilton Tiger-Cats' negotiation list, which gives that franchise the first opportunity to sign him should he express interest.

Generally speaking, Orridge said he leaves player moves in the hands of individual teams. But he said he would reserve the right to step into a complicated situation, if necessary.

"I rely primarily on the assessment of the team," Orridge said. "It is their charge to evaluate the talent and to bring that talent forward. To be candid, if there is a situation that we believe warrants additional input, we certainly want to provide that to the team. We're obviously charged with making sure that the integrity of the league and the integrity of our brand is perpetuated."