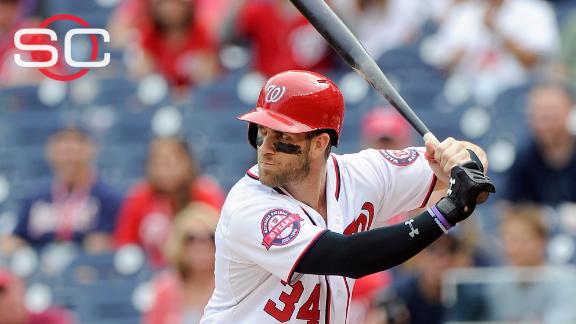 Bryce Harper's monster season has made him the youngest unanimous MVP in baseball history.

Harper beat out fellow finalists Paul Goldschmidt of the Arizona Diamondbacks and Joey Votto of the Cincinnati Reds for the award. He tallied 420 points to finish 186 points ahead of Goldschmidt, who finished second.

All three finalists were from teams that did not make the playoffs. The most recent MVP from a club that did not reach the postseason was St. Louis' Albert Pujols in 2008.

"The entire Lerner family extends congratulations to Bryce on his well-deserved Most Valuable Player award and his tremendous, record-setting season," Nationals owner Ted Lerner said in a statement. "It's such a pleasure to watch him play, and we look forward to his future outstanding contributions to the team."

Harper also tied for the NL lead in homers (42) and had the second-best average in the NL (.330).In his first full season playing right field, he ranked fourth among NL right fielders with seven defensive runs saved and was a Gold Glove finalist.

The 23-year-old lefty slugger, who was drafted first overall in 2010 and has battled injuries since making his big league debut in 2012, played in a career-high 153 games during a season in which several teammates missed time with injuries.

"All I wanted to do was stay healthy and stay on the field every day," Harper said.

Harper, who was 22 years and 353 days old on the final day of the season, becomes the fourth-youngest MVP in MLB history and the youngest since Cal Ripken in 1983. Harper is the youngest NL MVP since Johnny Bench won the award in 1970.

Harper also becomes the first player to be named MVP in the history of the Nationals franchise, which includes the Montreal Expos. The previous best finish for the franchise belonged to Hall of Fame outfielder Andre Dawson, who finished second in the NL MVP balloting in 1981 and 1983.

"What a remarkable achievement for Bryce, to become the first Nationals or Expos player ever to earn the Most Valuable Player award," Nationals president of baseball operations and general manager Mike Rizzo said in a statement. "There has never been a question about Bryce's talent. It's transcendent. And to watch him put together the type of historic season he did in 2015 -- at age 22 -- only heightens the excitement for what remains ahead of him. We are extremely proud."

ESPN senior writer Eddie Matz and The Associated Press contributed to this report.