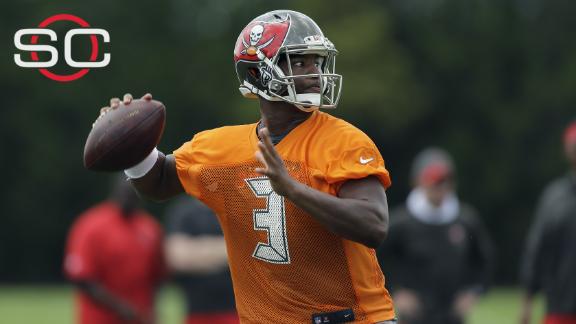 TAMPA, Fla. --Jameis Winston, the first overall pick in this year's draft, will be working with the first team when the Buccaneers begin training camp Saturday.

The news about Winston is a switch from how the Bucs handled the quarterback position in the offseason. Although Winston got some first-team work, third-year pro Mike Glennon often worked with the starters.

But Smith said it's time to make Winston the starter.

"I would never put a guy in that position if he wasn't ready for that," Smith said. "A lot has been said about Jameis and mentors. Jameis doesn't need a mentor. Jameis is ready to take the reins and go with it."

Winston has been everything the Bucs thought they were getting when they drafted him out of Florida State. He has picked up the offense quickly and developed good chemistry with receivers Vincent Jackson and Mike Evans.

"A lot of things go into that," Smith said. "We've had a lot of evaluation of him. It's where we feel like he is. We brought him here to be our quarterback and we feel like he's ready to take this next step.

"I feel strongly about this. We feel like we've let Jameis go through a process in the offseason, getting limited reps and working with both groups. We put him in that position but eventually you have to put them in the lead position and let them go."

Buccaneers name Winston starting QB
Ryan Clark and Field Yates agree that naming Jameis Winston as the starter was the right thing to do at this time of training camp.