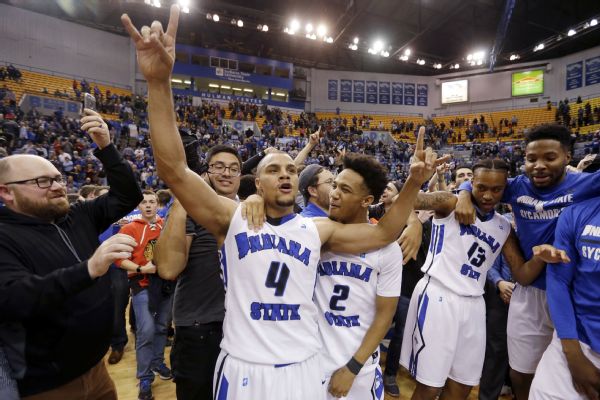 "It was special," Scott told ESPN.com shortly after Indiana State fans stormed the court at the Hulman Center in Terre Haute, Indiana, to celebrate the win. "It's Sycamore history. I'm proud to be a part of it."

But his identical twin brother, Fort Wayne star guardBryson Scott, who finished with 18 points and 12 rebounds in his team's upset of then-No. 3 Indianaon Nov. 22, thinks his performance against the Hoosiers gives him family bragging rights.

"Well, I don't know what Butler was ranked," Bryson Scott told ESPN.com, who chuckled as he thought about the question. "What? 16th? Well, Indiana was third. I'll probably get more of the bragging rights. Both are big wins."

Brenton Scott said he's proud of his brother's performance against the Hoosiers, but he expects the Fort Wayne, Indiana, natives to share any holiday rewards from their family.

"We'll both probably get a big gift," the Indiana State standout said.

There are eerie similarities between their two performances against in-state powerhouses Indiana and Butler. The twins each recorded three assists and made 50 percent of their field goals. Brenton Scott (25 points) finished 9-for-18 against Butler on Wednesday, and Bryson Scott went 8-for-16 in Fort Wayne's win over Indiana last month. Each made six shots inside the arc in his respective upset, too.

Brenton Scott said the end of the Butler win did not go as planned. After the guard sank the first of two free throws to give his team a 72-71 advantage with 0.8 second on the game clock, Indiana State coach Greg Lansing told him to miss the free throw. He did, but only by accident.

"After I made the first, [Lansing] kinda whispered to miss the second," the Indiana State guard said. "I think I tried to make it. I was trying to make it. I think I fooled everyone."

The twins, both juniors, said they weren't surprised by their production in the upsets.

"I texted him after that game and told him, 'That's how you play,'" Brenton Scott said of his reaction to his twin's effort against Indiana in November.

Added Fort Wayne's Bryson Scott on his brother's performance Wednesdayagainst Butler: "I thought it was great. I thought he put on a show."