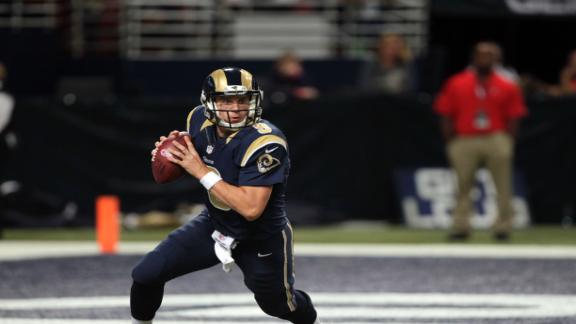 It's safe to say the Seattle Seahawks might not have seen Austin Davis coming either.

In a game highlighted by two risky play calls by his team's coaching staff, it was Davis' steady hand that had as much as anything to do with the St. Louis Rams' 28-26 victory over the reigning Super Bowl champion Sunday in St. Louis.

Davis completed 18 of 21 passes against Seattle for 152 yards. Modest numbers, and dry in comparison to fake punts and fake punt returns. Nevertheless, his play certainly won over at least one admirer.

"Austin can definitely play at this level," Brett Favre, the only Southern Miss quarterback other than Davis to start more than one NFL game, told ESPN's Ed Werder.

"Austin, like those mentioned, just needed a legit opportunity."

Davis, however, was at his best late in the game.

In the first three quarters, he completed 13 of 14 passes for 77 yards, an average of just 5.9 yards per completion. But after Seattle pulled within two points at 21-19, Davis suddenly needed to come up big.

He hadn't been able to in the past three weeks after leading a late victory drive in his first start against Tampa Bay. But he found a way Sunday to lead an 80-yard drive to give the Rams the winning points.

Asked Wednesday about Favre's comments, Davis said he's not thinking along those lines.

"I don't really want to be the next anybody," he said. "I just want to be the first Austin Davis and just keep doing what we're doing and try to go on a winning streak here. It felt good to get one this past week; I think it was much needed for our football team. We're just going to try to keep it going."

Davis said Favre sends him encouraging texts, and that the two spent some time together in Hattiesburg as Davis prepared for the 2012 draft.

"I got a chance to throw with him and meet him," said Davis, who went undrafted. "I couldn't quite throw it like he could, so I don't know if any of his pointers helped me."

Information from ESPN Rams reporter Nick Wagoner and ESPN Stats & Information is included in this report.

Schlereth's Impression Of Davis
Mark Schlereth gives his take on Austin Davis in light of Brett Favre calling Davis the "next Brady, Warner."

Rams Getting Healthy In Defensive Backfield
ESPN Rams reporter Nick Wagoner says the team's defense against the pass should improve as players return.