Angels pitcher and manager suspended for pitch at Marisnick 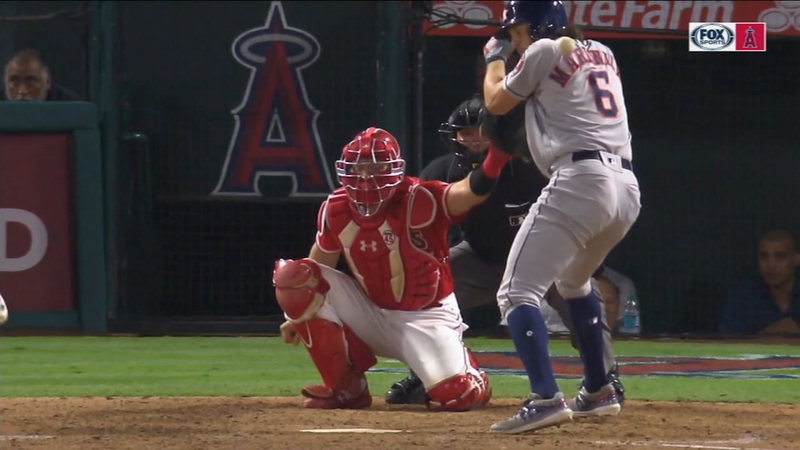 Astros rush to defend teammate after Marisnick hit by pitch

The Angels said Noe Ramirez will also be fined for the pitch that happened in the sixth inning of Tuesday night's game in Anaheim.

MLB also banned and fined Angels manager Brad Ausmus due to the incident. Ausmus, a former Astros player, is serving his suspension during Wednesday night's game vs. Houston.

If he doesn't appeal, Ramirez's suspension will also begin Wednesday.

The pitch caused both benches to clear. Both sides were warned by umpires, and a verbal confrontation broke out between Angels first baseman Albert Pujols and several Astros in the dugout, including pitchers Lance McCullers Jr. and Justin Verlander.

An altercation between the teams seemed imminent until Marisnick waved at his team to return to the dugout. Some fans speculated that the hit may have been retaliation.

Marisnick was suspended two games after he ran into Angels catcher Jonathan Lucroy while trying to score in Houston nine days ago, leaving Lucroy with a concussion and a broken nose. Lucroy is out for at least three more weeks. Marisnick is currently appealing his suspension.

Marisnick attempted to shrug off the heavy boos that greeted his every move at Angel Stadium.

"It was an unfortunate play back in Houston. I feel terrible about it. To come here and have something like this go down, it (stinks)," said Marisnick.

"It was a little high, a little inside. There's unwritten rules in baseball, and I think as players we respect them. I think that's a question for him, if it was intentional or not. I'm not the one throwing the baseball," Marisnick continued.

Ramirez, one of the Angels' most effective relievers, repeatedly insisted the whole thing was a misunderstanding.

"I was just trying to sneak a fastball by him,'' he said. "I threw two sliders away. I think the scouting report on me is I might sneak a fastball in there after a couple off-speed pitches. I tried to sneak one by him in, and it just got away from me.

Angels manager Brad Ausmus agreed with his pitcher that the high and inside pitch to Marisnick was not intentional.

"The first pitch was a strike," Ausmus said. "If he swings at it and hits it, we're not even talking about it. It's tough to go to a 1-and-1 count with any intent. Noe is a right-handed pitcher who comes down from the side and sometimes people get hit."

Hinch disagreed, and the manager also wasn't happy about the way it happened.

"I wish they would have handled it better,'' Hinch said. "It was too high. If they're going to hit guys, they need to hit guys the right way. They don't need to throw two ... sliders and then throw at a guy at the neck level. That's not right. That's not the right way to do it, even if you're allowed to do it, which you apparently are nowadays.''
Report a correction or typo
Related topics:
sportscalifornialos angeles angelsmlbhouston astrosbaseballu.s. & world
Copyright © 2021 KTRK-TV. All Rights Reserved.
More Videos
From CNN Newsource affiliates
TOP STORIES