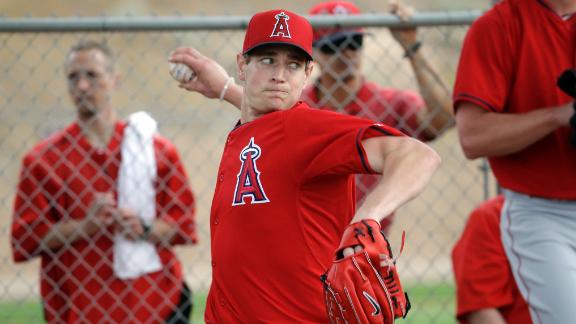 Los Angeles Angelsright-handerGarrett Richards will not be ready to pitch on Opening Day, according to manager Mike Scioscia.

Richards is expected to begin pitcher fielding drills in about a week as he makes progress from August knee surgery, and the club remains hopeful he could be pitching in games two to three weeks into the regular season for the reigning AL West champions.

Richards and the Angels previously had hoped that the right-hander would be ready by the time their regular season starts on April 6 against the Seattle Mariners.

Scioscia said that Richards would throw a bullpen session of 40-50 pitches and do some simulated work Sunday to prepare for fully fielding his position, weather permitting with rain forecast all weekend in the Arizona desert. That work would include agility work in the outfield and making some cuts and turns like he does moving off the mound.

"That's a substantial step," Scioscia said. "I think he's transitioning and getting close to what a regular spring training would be. He's almost at the end of what you would consider rehab. He's not fully. They haven't taken all the reigns off because of running and PFP and things like that. You can try to project, he's 2-to-3 weeks behind some guys. So if that progression is prorated, you get kind of a window where you can expect him during the season. That's what we're looking at."

Richards, who has been determined to be ready for the season opener and on the short end of a 6-to-9 month recovery time, went 13-4 with a 2.61 ERA in 28 starts and 168 2-3 innings last season before he tore a tendon in his left knee Aug. 20 while covering first base in a game at Boston. He had surgery shortly thereafter to repair a torn patellar tendon.

The 26-year-old Richards received a $3.2 million, one-year contract early last month to avoid salary arbitration. He still needs to throw to live hitters as another progression in his recovery. Scioscia said Richards could get into some Cactus League games during spring training for a couple of innings if he continues to have no problems or setbacks.

"There are some things he has to do," Scioscia said. "It's tough to give a date right now. He still has some things that are important that he has to get through. We expect him to, but you don't know how he's going to come out."