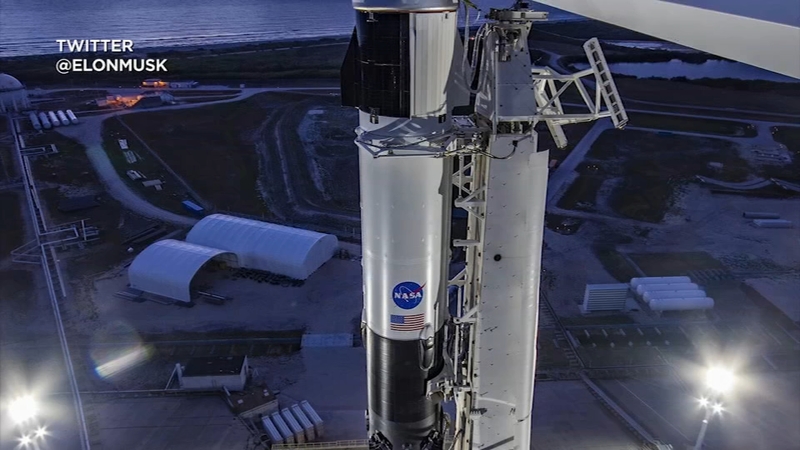 HOUSTON, Texas -- If all goes to plan, two U.S. astronauts will float into the International Space Station on Thursday afternoon from a U.S. rocket for the first time in nine years. When they get there, they'll find an American flag left there by the last space shuttle crew in July 2011.

Atlantis commander Chris Ferguson said at the time about the flag, "It represents a goal. [The flag is] to be returned to Earth once again by an astronaut that launches from a U.S. vehicle, hopefully in a few short years."

WATCH: Shuttle Atlantis crew challenges next US launched crew to come capture the US Flag left on board the Space Station in 2011
EMBED More News Videos

"This flag represents not just a symbol of our national pride and honor, but in this particular case, it represents a goal."

With a successful launch Wednesday, SpaceX astronauts will win the race to capture the flag beating Boeing - its competitor in the U.S. commercial space race. It's a big win for SpaceX, the private company that built the rocket, but not the prize SpaceX has been eyeing.

More than a decade ago, in June 2009, Elon Musk stood with ABC13's Ted Oberg outside what was then just a cargo capsule still being designed to fly freeze dried food and supplies to the space station.

He was three years away from his company's first successful cargo flight with the space station for the first time, but Musk was already looking ahead.

"You make no secret about the fact that this is not taking freeze dried food to the space station for its life, you want people in this soon?," Oberg asked Musk as he looked over the Dragon capsule.

"Absolutely," Musk confidently answered. "The whole purpose of me starting SpaceX from the beginning has been human space flight. We've designed the Falcon Nine rocket and our Dragon spacecraft to be human-rated from day one."

It is the tradition of American space exploration from its earliest days.

At Rice University in September 1962, President John F. Kennedy launched America's Space Race, telling Americans, "We do these things, not because they are easy but because they are hard." Nine years later, a man was on the moon.

And as he left the moon in 1972, NASA astronaut Gene Cernan told the world, "God willing, we shall return."

America hasn't been back since, but in 2011, when the final space shuttle came to a stop, Commander Chris Ferguson said from the flight deck, "One thing is indisputable, America is not going to stop exploring."

Which likely makes the 20-year old International Space Station, just 220 miles above Earth far from the final goal for SpaceX or NASA.

SpaceX is just 18 years old. It's smaller and leaner than others. Its workforce is on average 20 years younger than NASA's. According to government audits, Wednesday's flight will be millions of dollars cheaper than either the Russians or Boeing, Musk's American competitor. But it doesn't appear to be the win he's ever been satisfied with.

Again from that 2009 interview, Oberg asked Musk if he saw the company going further than the ISS. Musk answered, "It's not out of the question." It never was.

Musk now has his sights set on Mars.

TO MARS AND BACK: SpaceX's goal has always been to land the first humans on Mars by 2024.

On the CBS Late Show, Musk called Mars, "a fixer upper of a planet." And to overcome its notoriously unlivable conditions, Musk suggests warming it up - adopting an idea that repeatedly hitting Mars with nuclear weapons could make it possible for humans to live there.

"The fast way to do it is to drop thermo-nuclear weapons on the planet," Musk told host Stephen Colbert in 2005.

He hasn't talked about nukes much lately, but hasn't stopped thinking about taking humans to Mars.

On a windy night in September in Boca Chica, Texas, Musk unveiled his 'Starship,' a 390-foot tall stainless steel rocket Musk is hoping will be the prototype of a vehicle that will get to the moon and Mars beyond it.

Musk bases much of that effort from the SpaceX outpost in Boca Chica, between Brownsville and South Padre Island, but not necessarily in Houston.

SpaceX has just a small office and handful of employees in Space City. From his outpost in south Texas, Musk wants to put a million people on Mars by 2050, with flights going out three times a day.

Earlier this month, Musk told Joe Rogan he was selling all of his homes to get rid of distractions and focus on space exploration.

"Does it really make sense for me to spend time designing a house, getting OCD on the details or should I be allocating that time to getting us to Mars?" Musk asked himself. "I should probably do the latter."

So when we cheer the launch tomorrow, don't think for a second the guy behind it is taking a rest.