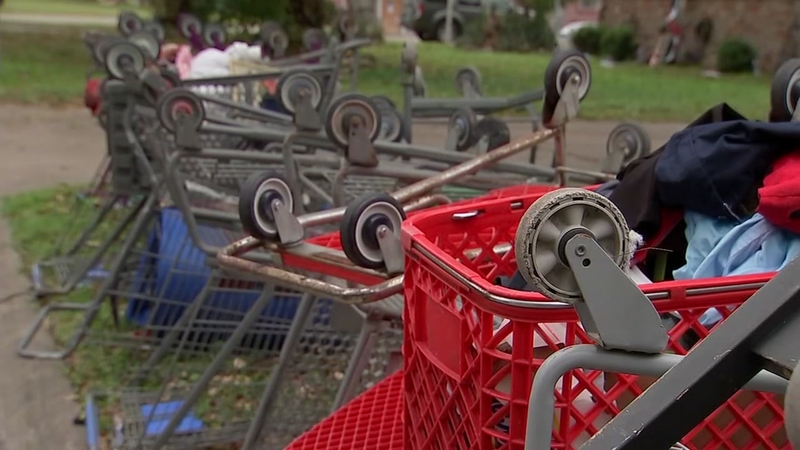 HOUSTON, Texas (KTRK) -- John Royalty is fed up with abandoned shopping carts, and to prove how bad it is near the Shenandoah subdivision in southwest Houston, he collected nearly two dozen carts.

"When they're through bringing groceries home, or piling their belongings in them, they leave them in the middle of the street, for people like me to see. They're a safety hazard to drivers, and they're affecting the properties here," he said.

Royalty said he contacted the retailers, whose logos are printed on the carts.

"One store responded and collected five of the six carts I had. They left the one with the damaged wheels," he said. "No one else called me back."

"In the past, we found shopping carts that were dumped in ditches, forming a dam and causing flooding," Laster said. "Right now, we have a taxpayer funded program to pick up these businesses' property and return them for free. There needs to be some kind of fee to reimburse the city for the work."

The collection program provides for a Solid Waste Department employee to collect the carts, take them to a city warehouse, and then inform the stores to get their carts. A proposal to charge for the collection has been rejected by the city so far.

On Friday, the collection truck rolled up to Royalty's address. The carts were removed from the yard and placed along the curb, so they could be loaded onto a trailer and hauled off to the warehouse.

The council collection program rounds up several thousand carts per year for the two districts involved.

"We don't have a patent on this program," said Laster. "The other districts can get involved as well. We just need to revisit why we're paying for this, instead of the retailers."