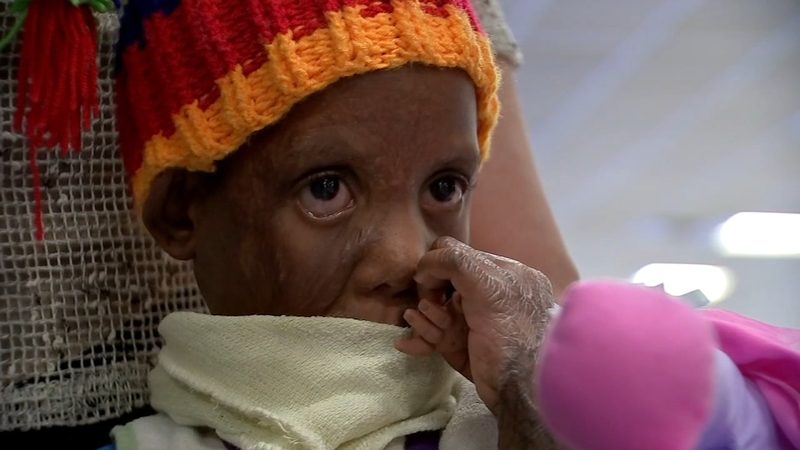 HOUSTON, Texas (KTRK) -- Every day at Bush Intercontinental Airport, between 100,000 and 120,000 fly in and out of the country's fourth largest city and home to the world's biggest medical center.

On the last day of July, one of those passengers was taking the first steps in a journey that will change her life.

Elvina Kolevi, 4, was burned by a flame at age 2 and abandoned because of it. She's from a primitive village in Papua New Guinea, but coming home to people who love her.

Cletus Dillman is a Christian missionary who found Elvina. For more than a year and a half, he has been working to get her treatment for her wounds.

"You cannot ignore the pain. Especially in a place like Papua. It's very remote," Dillman told ABC13. "I knocked on many doors around the world asking for help. The first person that answered my call was Ms. Hashmat, the House of Charity."

Ms. Hashmat is Hashmat Effendi, a Muslim woman who runs a non-profit healing home in Houston where Elvina will live for free for the next six months.

Elvina will be the 275th child Effendi has helped.

Texas Children's Hospital has donated the treatment. As many as three surgeries will be needed to transform Elvina. Still, it was expensive to bring her here.

Dina Simmons, Dillman's long-time friend, came to Houston from Arizona for Elvina's arrival and is leading the slow fundraising effort meant to pay for Elvina's flight, that of her caregiver Kuto, and for another child still awaiting her chance.

"We're excited for this life-changing thing that Elvina is going to get the help that she needs," Simmons said.

First steps are often the most important. They are the most critical.

Elvina, half a world away from the only place she's ever lived, is taking her first steps for a second time.