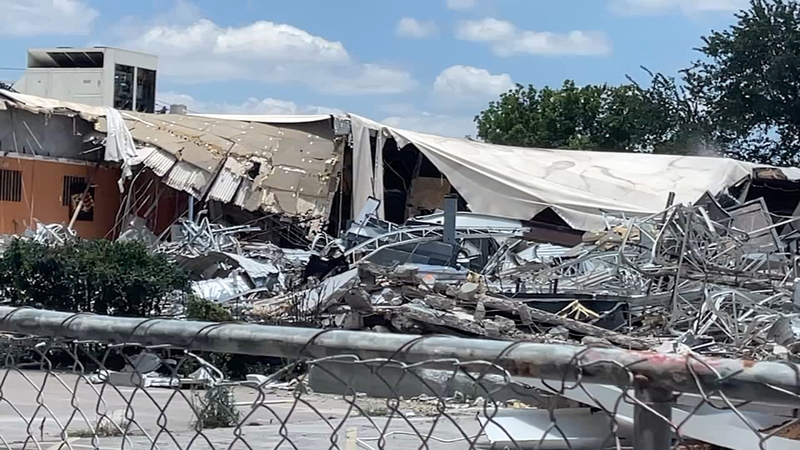 HOUSTON, Texas (KTRK) -- People in Montrose may be known for embracing differences, but embracing change is a little harder to swallow.

It's especially true when long-time landmarks are being replaced with high-rise developments with high costs of admission.

"Some friends of mine last weekend had dinner. We lived in the Montrose for many years. We were trying to decide what was the beginning of the end?" said Houston writer Jeff Balke. "Where did it start? The gentrification of the Montrose. We thought it was somewhere around the early 2000s."

Balke knows his Montrose history and then some. He once worked across the street from the famed "Disco Kroger" on Montrose Boulevard and visited daily. While he didn't give the now-gone grocery store its nickname, Balke is known for labeling the other Houston-area Kroger stores.

"Customers would come in late at night after the bars closed," Balker explains. "They would often play club music over the PA system late at night in the store. It sort of garnered the nickname."

He recalled that, while the recent landscape changes appear drastic, there've been a number of changes over the years that may have been more heartbreaking.

"When certain bars closed that were classics, I feel like that's when Chances and Mary's and were replaced by Underbelly's. That was a big turning point. That did change some of the flavor of the Montrose."

As the dump trucks and hydraulic shovels scooped the debris from what's left of the Kroger building, the lot to the north between Lovett and Westheimer is already clean from the removal of a shopping center known for a bookstore and liquor retailer among other businesses.

The land recently sold for a reported $27 million, according to Realty News Report.

"When they tore down that shopping center, that sucks," Balke said.

Just blocks away from the demolition, Paul Premazon's unique business of metaphysical and occult offerings remains robust, but he was quick to note that gentrification may seem like a good thing, but it doesn't come without a cost.

"While there are a lot of new things in the area, I'm not sure that 'new, bright and shiny is better," the Magick Cauldron owner said.

"When it comes to gentrification, the displacement of the people and culture that came before, if you're going to replace a building with something else, great," Balke said. "But when you replace it with something that's 10 times more expensive than what was there before, you're really pricing out the people who made the neighborhood what it is."

Premazon and Balke's first-hand accounts are reflected in data compiled by the Kinder Institute for Urban Research at Rice University.

The institute released a report on Houston's gentrification in 2018 that showed gentrification had accelerated across the city since 2000, though Montrose wasn't the only area impacted.

"Three case studies selected, Fifth Ward, OST/South Union and Greenspoint, were found to have relatively high susceptibilities to gentrification according to our analysis," the report's authors wrote.

"Unfortunately, Houston is trying to be like every big city in the east," Premazon warned. "With these 1,000 unit apartments and condo projects and stores on the bottom, just like New York or San Francisco or wherever. We're missing our history."