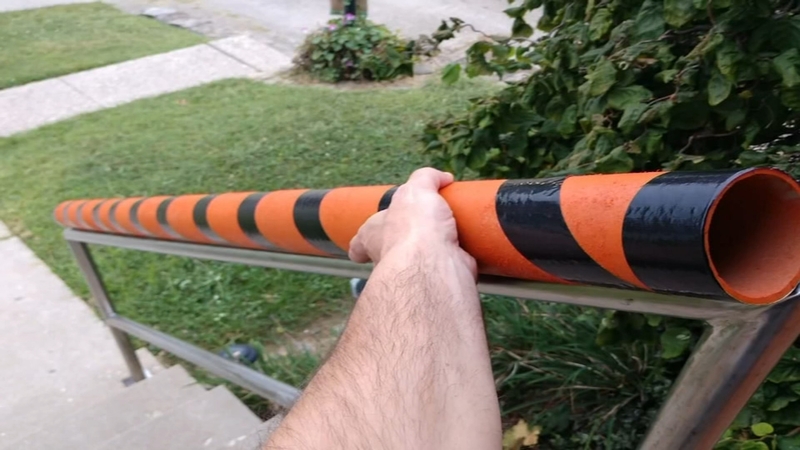 DELHI, Ohio -- Some parents may be leery about letting their kids trick-or-treat this Halloween in the middle of the pandemic, but a man came up with an idea to keep the tradition alive and safe.

Andrew Beattie shared a video of his creation on social media. It's a 6-foot long chute he made from materials around his house in Cincinnati.

Beattie's love for Halloween is what might have led to his great idea, which is something he said he's been wanting to do.

"I've been wanting to do something similar to it for a while just to help people with mobility issues and, again, like I said with having an immune deficiency, myself, it's a good idea that time of year when people are getting colds and things to have that little extra distance there, just a little common sense," Beattie told WBNS.

The chute was made out of a six by four pipe that he spray-painted orange and added duct tape to it. The chute runs from his front porch to the sidewalk.

Beattie adds that he will have a sign that tells trick-or-treaters where to place their bag or bucket to prevent hand-to-hand exchange. He said all candy will be factory sealed until it's opened outside, and plans to wear a mask and change gloves frequently.

SEE ALSO: Trick-or-What? Pandemic Halloween is a mixed bag all around

"Even if they're completely comfortable with where things are right now, a lot of people that aren't," he said. "I think if they can see people doing things like this, it can give them a little bit of grace that it might encourage more people to get involved and get out there and get us back to looking the way we want to look."

While some places are considering no trick-or-treating at all, Beattie is encouraging those wanting to pass out treats to give making their own "candy chute" a try. He hopes it's something that will help keep the holiday tradition alive and create some positivity in the midst of the pandemic.
Report a correction or typo
Related topics:
societyohiohalloweenholidaycoronavirustrick or treatu.s. & worldgood newsfeel good
TOP STORIES
Family releases identity of mom and daughter found shot to death in SE Houston
14 hurt, 1 suspect arrested, 1 at large after mass shooting on Austin's 6th Street
Father, son dead from self-inflicted gunshot wounds in Katy disturbance
There's another big closure this weekend: Gulf Freeway
HPD officer fires at shotgun-wielding woman during domestic disturbance call
League City yacht dealer killed after being followed home from dinner
Here's when a chance for cooling downpours returns
Show More
9-year-old boy accidentally shot by family member in Fifth Ward
Monitoring for potential tropical development late next week, development chances at 40%
PULSE nightclub shooting victims remembered in Houston
Saturday was the 53rd anniversary of 'Loving Day'
HBU triple-jumper to compete at US Olympic trials after devastating injury
More TOP STORIES News