City council members call for reallocation of some HPD funding

Wednesday, the city council could vote on the budget for next year, and one council member is calling for millions of dollars that are earmarked for hiring new officers to be used for different purposes.

The proposal calls for eliminating 199 vacant positions at HPD, and using the money to create a civilian oversight board, among other things.

Council member Leticia Plummer said after meeting with dozens of citizens, she wants more training and more accountability within the police department, and she wants to use $11 million set aside for new HPD hires to be used in other ways.

Plummer says the creation of a civilian oversight board with the power to do its own investigations of police misconduct is just one of the things the money would be used for.

Another is creating an online complaint portal for people to report issues with officers that would cost $1 million.

An additional $3 million would be needed to give officers de-escalation training and crime diversion programs.

During a recent meeting, dozens of people turned out to ask the city to delay the budget vote to give everyone time to figure out what changes can be made to the HPD budget.

"The proposed (budget) for HPD is equal to the entire military budget of Uganda, it's a country with a population of 42 million. Why does HPD need a military level funding for developed neighborhoods?" one concerned citizen asked at a recent meeting.

Mayor Turner said at Tuesday's celebration of life ceremony for George Floyd that he is signing a new executive order that bans the use of chokeholds.

The Houston Police Officers' Union responded in a letter, with President Joe Gamaldi saying HPD has "banned/not permitted chokeholds for the last 40 years and quite possibly has never permitted them."

You can view the whole letter at this link. 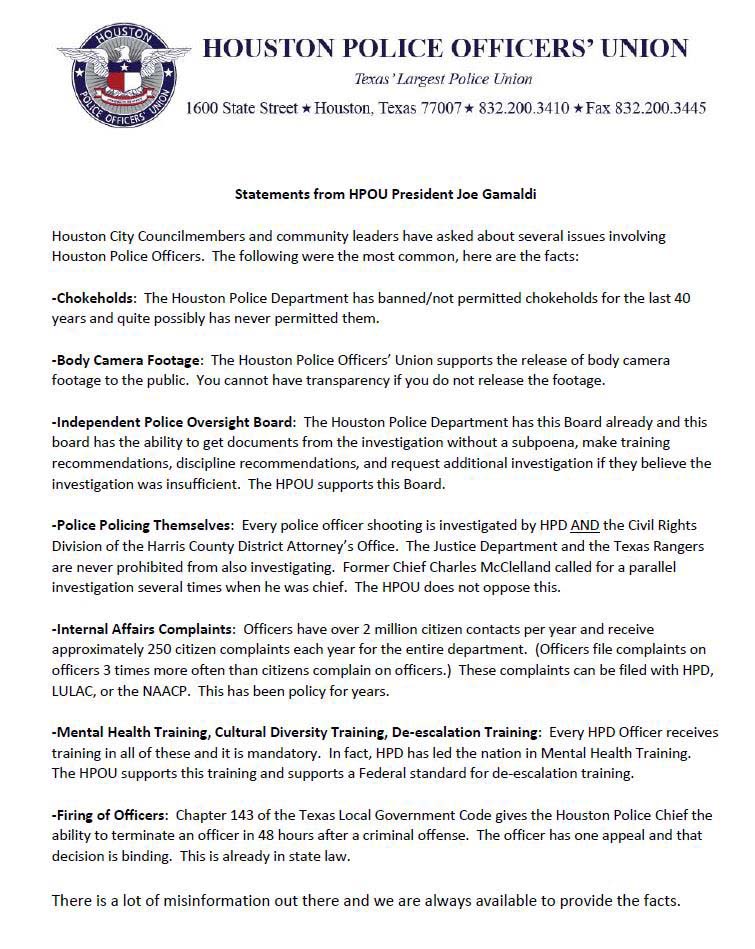 The mayor also says there will be an emphasis on de-escalation and exhausting all alternatives before using lethal force.

Although the city council is expected to meet Wednesday to go over the budget, they may not vote until a later date.
Report a correction or typo
Related topics:
societyhoustonbudgethouston police departmenthouston city councilhouston politics
Copyright © 2020 KTRK-TV. All Rights Reserved.
More Videos
From CNN Newsource affiliates
TOP STORIES