Boy with cystic fibrosis sworn in as honorary deputy 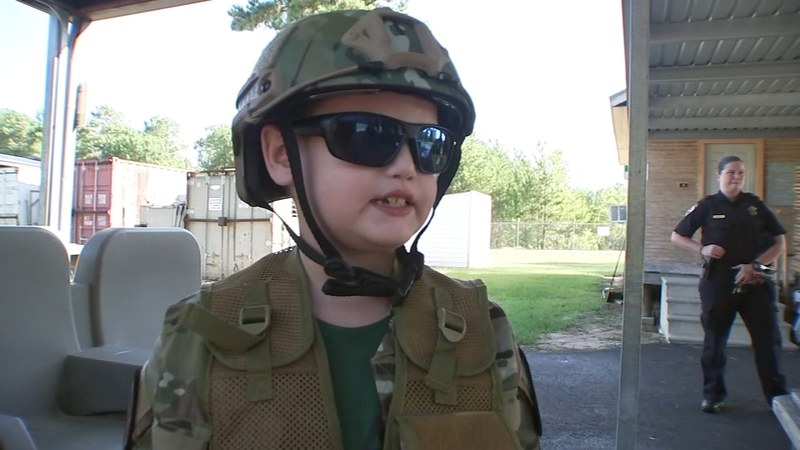 Boy with cystic fibrosis sworn in as honorary deputy

Isaac Ivey's dreams came true when he was handed a badge, uniform and signed a contract with the sheriff's office.

At just 3 months old, Isaac was diagnosed with cystic fibrosis. His mom says since he was 4 years old, he's wanted to be a SWAT officer.

"Raise your hand and repeat after me," Sheriff Bobby Rader instructed Isaac.

8-year-old boy sworn in as deputy

Crystal Ivey, Isaac's mom, told ABC13 that she wanted her son to be able to forget about the hospitals for just one day and just feel like a normal little boy.

"This is amazing. It's definitely a dream come true," Crystal says.

Bubba with his crew.

“If we can take time out of our day to bring his wildest dreams to life, then it’s nothing for us. It’s nothing for us to do that for him,” said Deputy Josh Cummins (who helped make this day happen).

What a day. So cool to see. #abc13 pic.twitter.com/2GAMlzMhjG

She added Isaac was pulled out of school because he was getting sick too often, and now has around-the-clock care.
The 8-year-old doesn't just have cystic fibrosis, but he also battles many complex health issues, including severe complications that affect his breathing.

"'Bubba' is definitely our miracle. We call him 'Bubba'," Crystal said. "His second home is probably the Texas Children's Hospital since he was 6 weeks old."

Bubba, you rock. Thanks for letting me share your story. Thanks for being such a happy kid. Thanks for showing us what it takes to be a deputy. (PS - story on #abc13 @ 4, not 3!) ⬇️⬇️⬇️ pic.twitter.com/4OBqp2SAMH

To watch Isaac climb into the SWAT vehicle, follow his new team members and cover his ears during practice explosions, you wouldn't know that he had open heart surgery nine months ago.