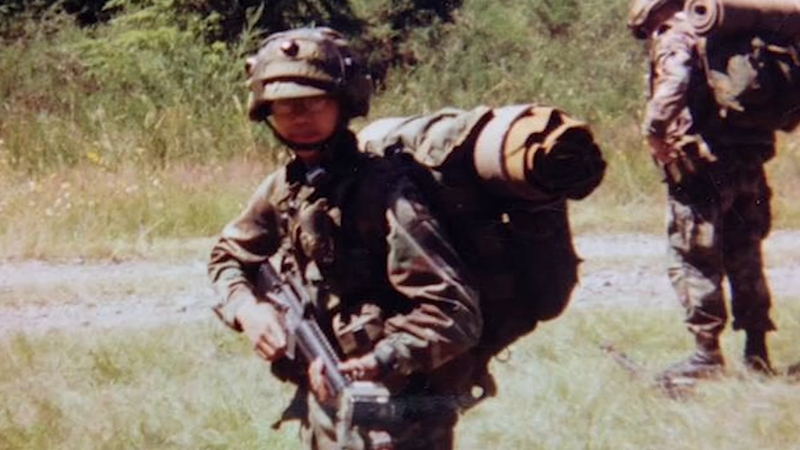 When Keli Chevalier left the U.S. Army in 2010, it was sooner than she expected.

Chevalier was riding with a group of contractors and their security team through Baghdad that year when a van exploded at a checkpoint. The blast threw her from the vehicle, fracturing her spine and knocking her unconscious. She didn't gain complete consciousness until she woke up in a hospital in Fort Benning, Georgia.

"My spine was completely fused together and titanium reinforced with multiple screws and rods," said Chevalier. "I asked, was my security team okay? They were alive and that was good news."

It was nearly a year and a half before Chevalier was able to walk on her own.

"When I came home, I was depressed. I had high anxiety. I was struggling with posttraumatic stress disorder," said Chevalier. "Our future was completely uncertain and I knew in the back of my head that because this was so sudden for me, I was not prepared."

Chevalier's husband, who had stayed home with their young son during her deployment, suddenly had to search for work. Chevalier began calling veterans-assistance programs, but only got voicemails.

"Ten organizations I reached out to and I got ten voicemails," said Chevalier. "Only one of them actually returned my call, and that call referred me to another organization I had already called for. Meanwhile, the bills were stacking up, our house note's due, we're behind on car payments. It's just nerve wracking."

Chevalier did eventually receive VA assistance after her injury, but she never forgot her struggle.

"I promised myself that this should never happen and will never happen to another female veteran who has served honorably," said Chevalier. "That she won't leave the military and then be lost in the fray of trying to figure out how to become a civilian."

That's when Chevalier founded a group called Sisters Seriously, which eventually turned into the W.A.V.E. Campaign.

"W.A.V.E. stands for Women of the Armed Forces and Veterans Empowerment," said Chevalier. "Our mission is to end poverty and homelessness amongst female veterans."

The non-profit, which is 100% donation-based, focuses on helping female veterans find success after service.

"We go on a mission to help our female veterans in our communities," said Chevalier. "So we volunteer at the VA, homeless shelters, with the American Legion and we do as much as we can to try to empower our female veterans who are either just transitioning or have transitioned over the years and still need help."

Once a month, volunteers with the W.A.V.E. Campaign visit the Michael E. DeBakey VA Medical Center in Houston, to visit with female veterans and bring them gift bags filled with items like pajamas, socks and toiletries.

"This is just one of the ways we want to let the women know that we care and that we're here and if they need anything, we're here to help them," said Chevalier.

"We've met women from every era going back to World War II and Vietnam who had never been acknowledged or thanked for their service," said Olivia Bush, Chief Financial Officer of the W.A.V.E. Campaign. "We have had women we've met who say, you know, no one came to see me. I was there for a week and no one came to see me and you guys gave me that gift bag. And you don't know how that made me feel."

The W.A.V.E. Campaign hopes to eventually create a female veteran's village to help women with housing, child care, job placement and other services.

"The vision for the W.A.V.E. Campaign is to create a women's Veterans Village that mimics what we have in on active duty military," said Chavelier. "With this, we can transition women from the military into the village and then give them all the wraparound services that they need. So mental health care, child care, job training, everything that they need to be viable citizens in their communities."