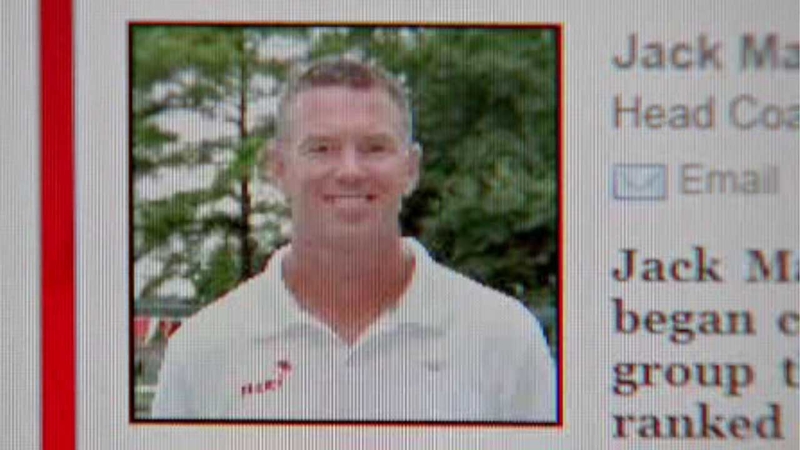 CYPRESS, TX (KTRK) -- A sexual allegation against a local swim coach cost him his job and his future in the sport.

Jack Maddan, the Head Coach of FLEET, the competitive swim team at Cy-Fair Swim Club on Spring Cypress Rd. has been banned for life from USA Swimming, the national governing body of competitive swimming in the United States.

"It means no more coaching, no more on deck. You can't organize meets. You can't work meets. You can't officiate meets . You're basically incognito. You're off the grid for all swimming, all the time," explained Braden Keith, Editor-in-Chief of SwimSwam.com, a national swimming publication.

Parents of swimmers have jumped to Maddan's defense telling Eyewitness News the ban is "tragic" and that their experience with Maddan has been only "positive." One parent said when swimmers learned of the ban Wednesday night, one punched a wall so hard, he broke his hand.

"There's not an ounce of truth. There is no substance to the allegations. There is not evidence to the allegations," Maddan told Eyewitness News. He wouldn't discuss what he's accused of citing a USA Swimming confidentiality policy but we've learned it's from 16 years ago, made by a former swimmer who recently came forward alleging sexual misconduct.

"They took the accuser over me. They need to work on their process." he said.

An assistant will now step into his shoes as head coach. Cy-Fair Swim Club Swim Club supports him.

Statement from Adam Stanford, President, Cy-Fair Swim Club:
"Jack Maddan is an exceptional coach, father, husband and role model. USA swimming banning him from membership will change none of that. Although Jack will no longer be able to perform the duties as Head Coach at Fleet Swimming, he and his family will remain in our hearts and always be considered OUR family. It takes but one meeting or conversation with him to understand his good character, love of swimming and love of the athletes us as parents entrust him with daily.

The entire basis of the circumstance that has now led to Jack being banned was based on an allegation from 1999 that we believe to be false. There are NO other complaints or allegations, past or present and those people that know Jack know he does not deserve the hand he has been dealt.

Jack as a coach has had the full and unwavering support of the Board of Directors throughout the process. Going forward, although he won't be our coach, Jack and his family will continue to have love and support from our Fleet family."

Statement from USA Swimming:
"USA Swimming received an allegation of sexual misconduct against Mr. Maddan. The allegation was thoroughly investigated, adjudicated and ultimately found to be a violation of our Code of Conduct, which resulted in a permanent ban from USA Swimming membership. USA Swimming stands by its Code of Conduct and Athlete Protection Policies and is deeply committed to the safety and welfare of all its members. We have zero tolerance when it comes to sexual misconduct. We have a responsibility to protect all of our members, especially youth athletes. It is the mission of the Safe Sport Program to increase awareness to reduce the risk for abuse in sport and our organization has no tolerance for violations of our Code of Conduct."