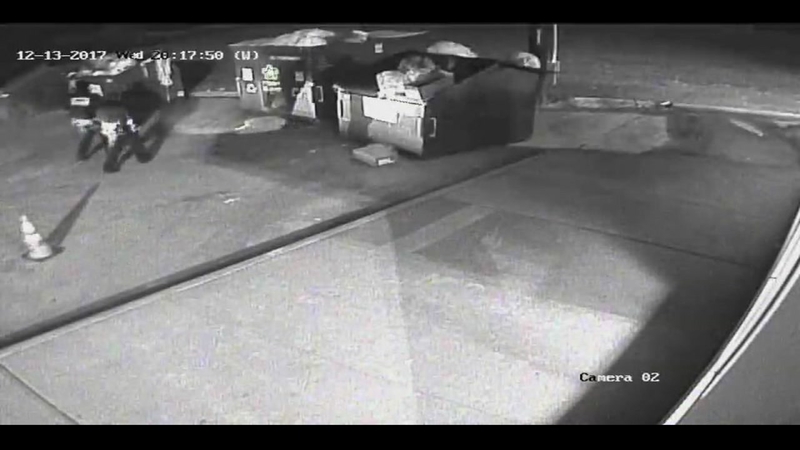 HOUSTON, Texas (KTRK) -- We have exclusive video of a robbery in progress that sent five teenage suspects to jail overnight.

There are still two suspects on the loose after what police call a crime spree in northeast Houston.

The camera that caught the crime is on a tire shop that points toward the drive-thru window.

While one suspect stands guard on the street, the others circle around the building and approach the drive-thru window.

The video shows one suspect climbing in through the window while the other guys stand around watching from the outside.

Ten seconds later, the suspect leaves through the window and the teens casually walk away.

Not long after, a security guard at a Subway just blocks away spotted the teens walking around his store and he drew his weapon.

Surveillance images from that restaurant show the teens disappear behind the store.

With a helicopter overhead and police dogs on the ground, five of the suspects were arrested, identified and taken to jail.

Employees at the Church's are happy the teens are behind bars.

"The car wash also, they got robbed also. I mean, this is not like the first time. We are scared actually," said one employee.

Employees at the Subway agree, with one saying, "I'm glad that they caught them because some people get scared to work here and that's not fair."

Employees of a nearby Jack in the Box say they, too, were robbed by teenagers within the last week and add the Taco Bell across the street was the victim of an attempted robbery.

Police say at least one other restaurant and a handful of area businesses were also robbed within the last few days and the teen suspects may be to blame.

"I'm willing to bring my gun because we don't have no protection," added another employee.

The workers were so frightened by the rash of robberies they were afraid to show their faces.

Police say one of the suspects had a gun. He is 18 and has been charged with aggravated robbery.

The others are facing misdemeanor evading charges for running from the police.