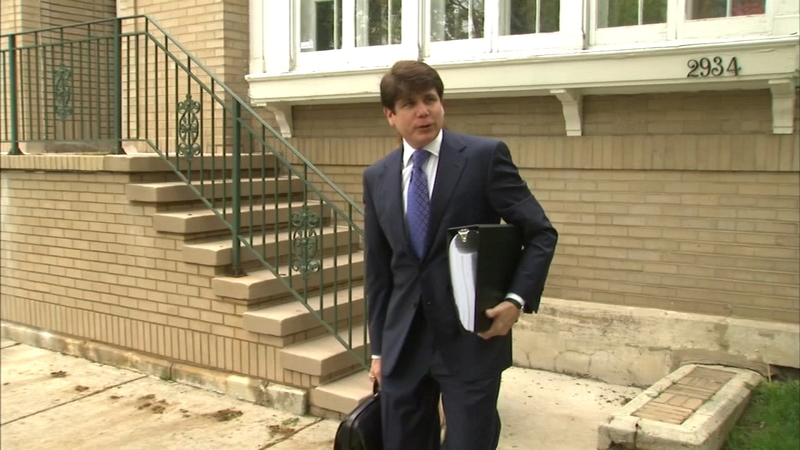 Trump made the statements to reporters on board Air Force One, after he announced he planned to pardon conservative commentator Dinesh D'Souza, who pleaded guilty to campaign finance fraud.

The Democratic former governor is in the middle of a 14-year federal prison term for convictions on bribery and corruption charges. He has claimed the charges and sentence were unjust.

Trump told reporters he felt Blagojevich's sentence was too long for having said something "stupid."

Blagojevich began serving his sentence in 2012. His scheduled release date is 2024.

According to a source familiar with the process, Blagojevich's legal team is expected to file a motion for a pardon next week, encouraged by the president's "pardoning mood."

The former governor's wife, Patti Blagojevich, said in a statement Thursday that she is encouraged by the president's comments:

"Amy, Annie and I are very encouraged by the President's comments today. He's given us something that has been hard to come by recently...hope. From the beginning, we've eagerly awaited the day when Rod could come back home where he belongs, and we continue to pray our family will be made whole again soon."

Blagojevich and the president have a past relationship. The former governor appeared on Trump's television show "Celebrity Apprentice" in 2010.

During the Thursday conversation with reporters, Trump said he is also considering pardoning Martha Stewart. She was convicted in 2004 of obstructing justice and lying to the government about why she unloaded stock just before the price plummeted.

Trump said she "used to be one of my biggest fans." She was also a star on Trump's "The Apprentice" franchise.

As he left Washington for a trip to Texas, Trump tweeted: "Will be giving a Full Pardon to Dinesh D'Souza today. He was treated very unfairly by our government!"

D'Souza, a conservative filmmaker, author and speaker was sentenced in September 2014 in federal court in New York to five years of probation after he admitted making illegal contributions to a U.S. Senate candidate in New York.

D'Souza acknowledged that he had two close associates each contribute $10,000 to the Senate campaign of Wendy Long with the understanding that he would reimburse them. Long ended up losing the 2012 race to incumbent Democratic Sen. Kirsten Gillibrand.

D'Souza, who made the documentary "2016: Obama's America," entered the plea a week after the federal judge overseeing his case rejected his claim that he was selectively prosecuted. The judge said D'Souza had shown the court no evidence that he was targeted.

The government said in court papers that D'Souza faced overwhelming evidence of guilt and "now seizes upon the fact that he is an outspoken critic of the Obama administration as an excuse to avoid the consequences of his actions."

D'Souza is a former policy analyst under President Ronald Reagan and a prolific author well known for works critical of former President Barack Obama. He retweeted Trump's tweet about the forthcoming pardon, but did not immediately respond to an emailed request for comment sent to his media company, D'Souza Media.

Trump's announcement that he will pardon D'Souza follows the president's granting last week of a rare posthumous pardon to Jack Johnson, boxing's first black heavyweight champion. The pardon cleared Johnson's name more than 100 years after what many viewed as his racially charged conviction in 1913 for traveling with his white girlfriend.