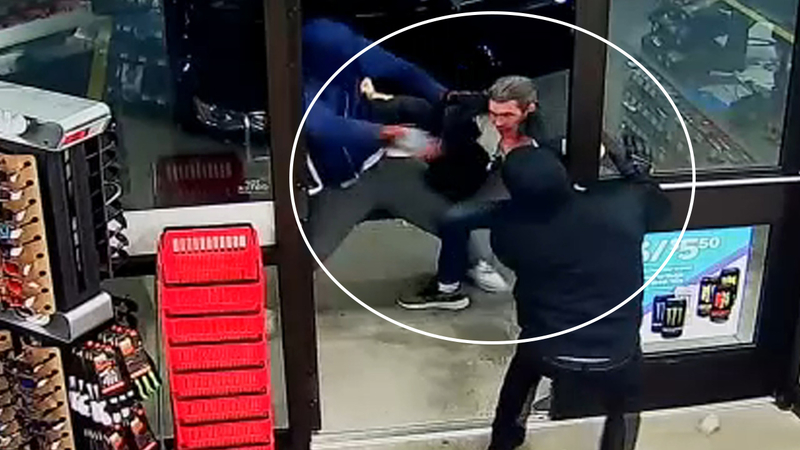 VIDEO: Robbers drag man inside store and hold him captive

WEBSTER, Texas (KTRK) -- An early morning trip to a nearby convenience store left a Webster man scratched and bruised, but grateful to be alive.

James Thomas had been playing video games at home on Sunday into the morning when he drove a few blocks to a newly-opened store on Highway 3. But he knew he was in trouble as soon as he saw a clerk on the floor.

A couple of minutes before he arrived, three men showed up with their faces obscured by hoodies cinched tightly around their faces and gloves on their hands. One man was carrying a large orange crowbar.

"I saw the clerk and tried to get out without them noticing me," said Thomas.

He made it into his car, but before he could lock the door, one of the robbers pulled the driver's door open, and pulled him out of the car.

Video obtained by ABC13 shows the struggle. Thomas was pulled back inside. His shirt was torn away as he tried to escape.

"They told me to get down on the floor," he said. "I didn't know if they had a gun. One of them told me they weren't going to hurt me. It didn't reassure me."

The robbers weren't there to rob customers or the clerk, but to clean out the ATM.

The crowbar pried open the cabinet, and the ATM remains out of service and cashless on Monday.

The clerk was apparently unharmed. Thomas has bruises and scratches from the struggle with his captors.

"I kept thinking about my wife and my son at home," he said. "As I was laying there, I kept saying the Lord's Prayer, seven times in all, until they left."

Webster police are examining the security video and contacting law enforcement in the area to alert them to the robbery, and whether it matches any other cases.

"While they didn't have a gun, they had tools that were weapons," said Sgt. J.C. Rincones. "It was very intimidating, as we believe this isn't their first robbery."

Anyone with information is urged to contact Houston Crime Stoppers at 713-222-TIPS. Tips can be submitted anonymously and tipsters may qualify for a reward if it leads to an arrest.