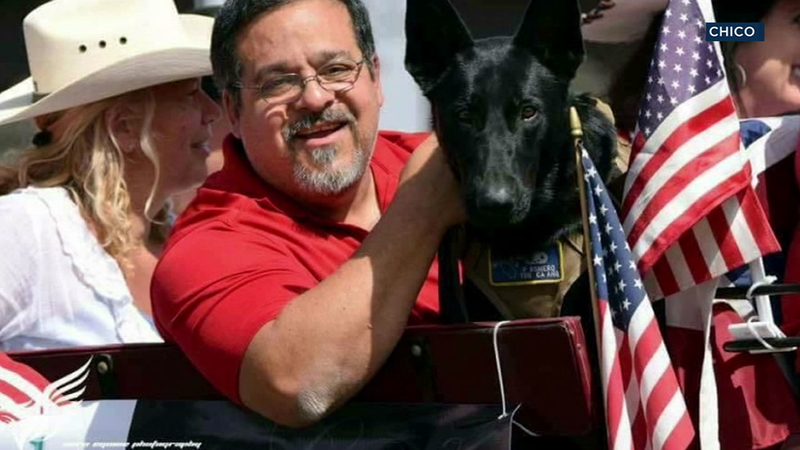 RIVERSIDE, California -- A service dog for a disabled U.S. veteran has gone missing. The owner of the solid-black German shepherd named Jet believes he was stolen.

"I knew when I got home the gate wasn't open, and Jet is not a dog who goes out when the gate is open. He sees the gate open and he stays," said Chico Romero, fighting back tears. "It's hard not having him. He's my friend, he's my buddy, he's my companion, he goes everywhere with me."

Romero says it happened on Friday, Aug. 11, on the 16000 block of Bright Morning Court in Riverside.

He said he let Jet outside into the backyard to play with his other dog, Bailey, and then went back into the house to check his email.

When Jet didn't come back inside a short time later, Romero said he went outside to investigate. He said he found the side gate opened, and Jet was nowhere to be found.

"Everybody who knows me knows how close Jet was to me. I feel like a lost puppy right now," said Romero.

Air Force veteran Chico Romero and his service dog Jet, who is now missing and believed to be stolen.

"All of a sudden I heard a pop in my back, and the next day I could not move," said Romero.
Romero said Jet helps him with PTSD, anxiety and depression. But that's not all.

"Believe it or not he was also my cane. Because there were a few times where my knees give out, I hold onto him because he was tall," said Romero.

Jet is a solid black German shepherd who weighs 82 pounds. A GoFundMe page was set up to help raise money for a reward for his safe return.

Anyone with information is asked to contact Riverside County Animal Services.