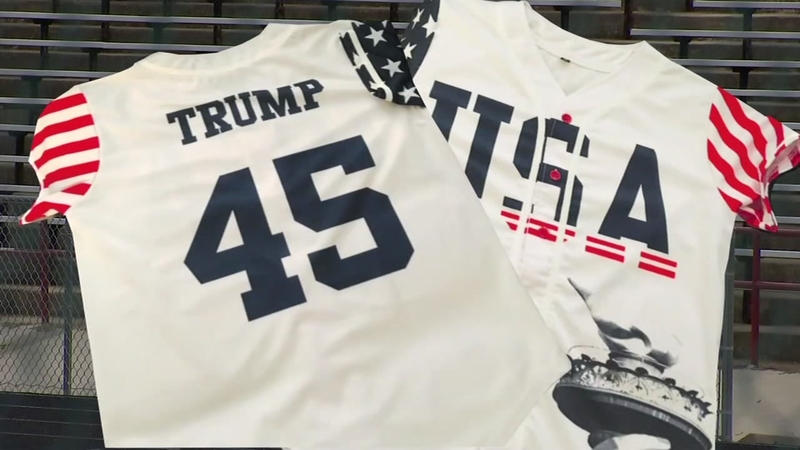 ANGIER, North Carolina -- A principal who forced a student to remove a jersey with President Donald Trump's name on it has been replaced, a North Carolina school announced Friday.

"After completing its review of an event that took place at the football game at Harnett Central High School on Friday, October 5, the school district is announcing several personnel changes," the school system said in a release.

Cindy Gordon has been removed as the high school principal and replaced by Catherine Jones, who was the principal at Harnett Primary.

Calvetta Dunkins, principal at Dunn Middle School, will step into the same role at Harnett Primary.

The changes came after Mike Collins, the father of the 18-year-old student, spoke to ABC11's Tim Pulliam about the way his son was treated during a high school football game after wearing a jersey printed with Trump's name.

The theme during Harnett Central High School's football game that night was to dress patriotically for USA America night.

A father tells me his son was asked by the school principal to remove this jersey during a patriotic-themed football game after people complained. Dad, a registered Democrat, says his son complied but felt humiliated. @HarnettCoSchool says it supports expression not disruptions pic.twitter.com/W9U9v2vBLF

Collins said Gordon asked his son to remove the jersey, which he did, but felt humiliated and left the game.

"We don't want any kids violated. We don't want to see kids embarrassed over something like this," Collins told ABC11. "He was not disrespectful. He was not acting in a manner that would cause attention to him."

"We want to emphasize that Harnett County Schools supports and affirms students' rights to express themselves - including wearing clothing expressing political messages or supporting political candidates or officeholders - in ways that are not expected to disrupt school or school events," school spokesperson Natalie Ferrell said in a release. "Harnett County Schools leadership appreciates all the patience of families, students, and the community during this process."

The school system did not say whether Gordon was still employed by the district.