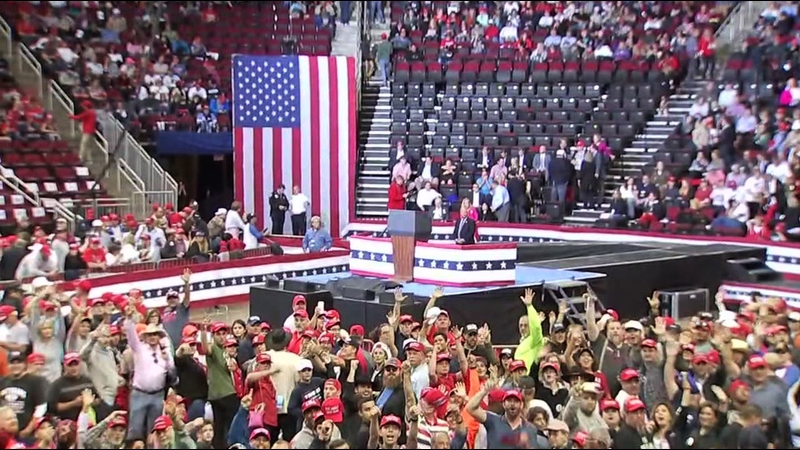 HOUSTON, Texas (KTRK) -- There is a sea of red at the Toyota Center as people patiently wait to see President Donald Trump's MAGA rally.

The doors were supposed to open up at 3:30 p.m. for the "Make America Great Again" rally, but organizers began to let people in just after 2 p.m. due to the overwhelming response.

The arena holds about 18,000 people, but the Trump re-election team that's organizing the event reports they've had 100,000 requests for tickets as of Sunday afternoon.

One man says he's been at the Toyota Center since 9:30 p.m. Saturday.

"I'm about to see a man whose done everything for our country he can. God bless him, I can't wait to say 'Thank you,'" he said.

The rally will kick off at 6:30 p.m. with a tailgate featuring live music, food trucks and appearances by campaign spokespeople.

Attendees who can't get in will also be able to watch the president's speech on a big screen outside.

Follow Chauncy Glover on Facebook and Twitter.
Report a correction or typo
Related topics:
politicshoustondonald trumprally
Copyright © 2021 KTRK-TV. All Rights Reserved.
RALLY
Texas businesses stall bill to block COVID vaccine mandates with rally
Houston rallies around Astros before ALDS Game 1
Man paralyzed by shooting sparks peace rally in Greenspoint
Murder victims' families march for justice in N. Houston
TOP STORIES
Boston-bound jet crashes on takeoff west of Houston with 21 on board
Houston executive 1 of 21 on board jet when it crashed in field
How residents in this Harris County neighborhood became numb to crime
Loved ones remember mom of 3 killed during home invasion
Alvin Community College offers way to tap into oil and gas
Friendswood gas fire put out after more than 5 hours since eruption
Aviation weighs in on what might have gone wrong in plane crash
Show More
Jan. 6 panel votes to hold Steve Bannon in contempt
Big warm up ahead but another cool front in the forecast
Astros vs. Red Sox: Houston ties the series after 9-2 win over Boston
Unsolved: A Life Never Lived
Alvin Community College gives inmates way to earn a second chance
More TOP STORIES News