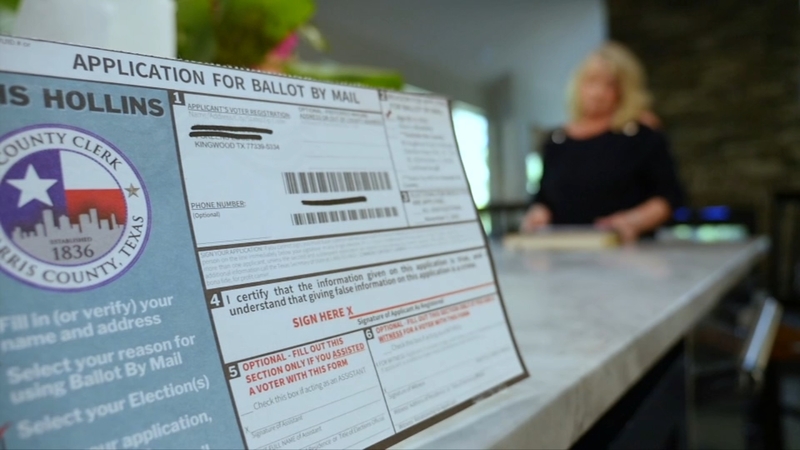 The 2020 election cycle has been unlike any other. In the midst of a global pandemic, a staggering number of people are choosing to cast their ballot by mail.

With that choice, however, brings concern over possible errors.

Harris County Clerk Chris Hollins said he is expecting between 300,000 and 400,000 people to either fill out their ballot at home, mail it in or drop it off - a record count, he said.

"I think that some individuals think that if you give a mail-in ballot to someone to fill it out and mail it in, that they will automatically be honest about it," said Houston voter Carolyn Fuller.

READ MORE: What you need to know before heading to the polls in Texas

About a month ago, Boughton received an application for a mail-in ballot that was sent to her home in Kingwood addressed to her mother, who died 12 years ago.

"It wasn't in an envelope," Boughton said as she held the application during an interview with Eyewitness News. "It had a little bitty sticker on the corner. It was obvious what it was. It was made out to my mother and, again, you fill it out and put a stamp on it and it goes back with all the information on it through the U.S. Mail."

Boughton's mother was a South Carolina resident and only visited the Houston area a couple of months out of the year.

Boughton is worried about what would happen if the application landed in the hands of the wrong person.

"This is a very, very important election coming up, and if people can find a way to vote twice or vote as someone else, vote for a different party, [or] do anything to affect the outcome of our presidency," Boughton said.

Hollins is reassuring voters and said an incident like that would be caught before it could happen.

Hollins said they do have people who have died on their list, but it would be caught when the application was returned to his office.

Applications for mail-in ballots are cross checked with the secretary of state's death registry, according to Hollins.

If his team found that an application was sent in for someone who is deceased, he said they would investigate it further.

"We are on guard for any shenanigans during this election season, whether it is through the mail or in person," Hollins said.

READ ALSO: These Texas counties had 10% or more mail-in ballot rejections in 2016 and 2018 elections

Meanwhile, the Texas Attorney General's Office shows there have only been three documented cases of someone voting illegally using the identity of someone deceased since 2004.

Hollins went on to say that his office has checks and balances in place to assure that people are not able to mail a ballot in, plus vote in person.

There are more than 100 Early Voting locations and you can vote at any one of them starting next Tuesday at 7 a.m. https://t.co/s3doaENr5P pic.twitter.com/iNbohHaKLE

He said his staff has people from both political parties who review applications and ballots to check signatures, determine their validity and make sure they are handled correctly.

After the applications and ballots are checked, Hollins said they are stored in a locked cage that is under 24/7 surveillance at NRG Arena - that's where their election headquarters is located this year.

The ballots are then taken out on election night when the polls close and it's time to tally.

With all of the measures in place, Hollins confidently said a voter is more likely to get struck by lightning than fall victim to mail ballot fraud.

"All of these horror stories, these boogieman stories, are meant to scare you," Hollins said. "They are meant to disenfranchise you and discourage you."

He said it would take hundreds or thousands of fraudulent ballots getting past their system to sway the outcome of an election.

Voter fraud, however, does exist.

Two weeks ago, the Texas Attorney General's Office indicted the Gregg County Commissioner and three others in a mail-in ballot fraud case.

"It's clear that vote fraud does happen," explained Brandon Rottinghaus, a professor of political science at the University of Houston. "There are cases where it is verified and prosecuted, but it is usually caught and it is extremely rare."

Rottinghaus suggests that prosecutions of these cases have put people who made mistakes in jail.

"Often times, these are just cases where voters make mistakes or local election officials make mistakes," he said. "It's often not pernicious."

The message across party lines remains the same: get out and vote.

Applications for mail-in ballots must be in the hands of the Harris County Clerk's Office by Oct. 23 so they have plenty of time to send the ballot in time to get it back.

Ballots can be mailed back or dropped off at NRG Arena.