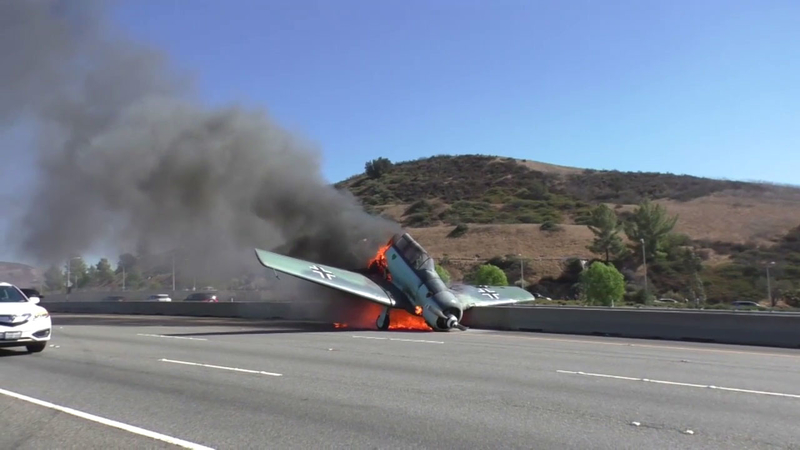 LOS ANGELES, California -- A small plane crashed on the northbound 101 in Agoura Hills on Tuesday, and the fiery wreck shut down both sides of the freeway for hours.

The crash was first reported around 1:45 p.m., according to the California Highway Patrol.

The plane crashed on the far left lane on the northbound side and erupted in flames. The aircraft ended up crumpled up against the center divider.

Los Angeles County Fire Department officials quickly responded to the scene and knocked down the flames.

CHP said the pilot was doing a test run from Van Nuys, did a loop around the Warner Center and then started to have engine trouble.

ABC7 food coach Lori Corbin was on the freeway and witnessed the crash. She was able to speak with the pilot, 43-year-old Robert Sandberg of Camarillo. He was off to the side of the wreckage and said his engine failed.
"I picked a spot on the freeway, where I knew there was a big section of cars that weren't there, but the engine completely failed. Fortunately, I was able to not hurt anybody - other than the airplane," he said.

Sandberg lost control of the plane when landing and collided with the center divider, according to the CHP. Good Samaritans helped him safely exit the plane.

Dramatic video showed the moment the vintage plane crash-landed on the 101 Freeway. The plane was seen flying in low and touch down on the freeway, bouncing up a few times before coming to rest on the center divider.
EMBED More News Videos

Video shows the moment a vintage plane crash-landed on the 101 Freeway in Agoura Hills, leading to a fiery spectacle that backed up traffic for miles.

The National Transportation Safety Board and the Federal Aviation Administration arrived at the scene to investigate and will complete their investigation at a hangar given that the crash was non-fatal.

The wreckage of the plane has been towed to a hangar where investigators intend to determine a cause for the accident.

The cause of the crash is under investigation by the CHP and NTSB.