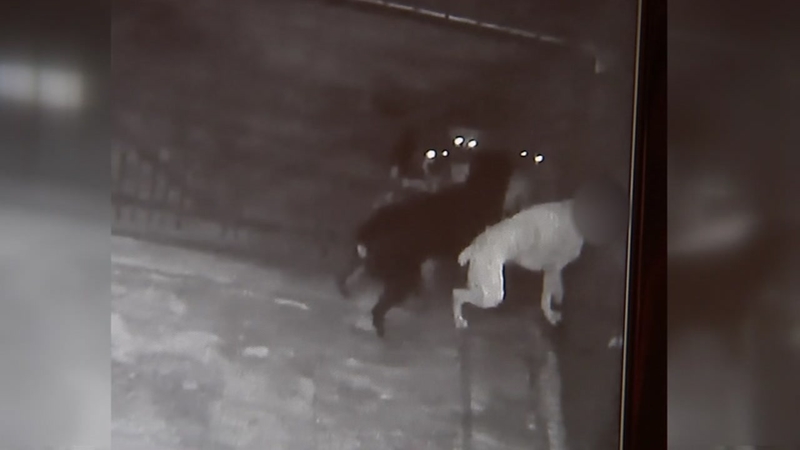 Family devastated after dog mauled to death by pitbulls

HOUSTON, Texas (KTRK) -- A family is desperate to find the group of dogs who they say brutally attacked and killed their dog in northeast Houston.

This sweet dog (Taz) was viciously killed by 5 other dogs in Northeast Harris Co. and this isn’t the first time he was attacked. We talk to Harris Co. Animal Control about the situation tonight at 6:30 on @abc13houston pic.twitter.com/CEapFeBNDE

The family told Eyewitness News that their two dogs were inside a wrought iron fence when five dogs gathered around and started attacking them.

Video released by the family shows the five dogs following the white boxer, Taz, from one end of the fence to the other.

Moments later, Taz's head is seen going through the bars, while the other dogs viciously attack him.

The family says the attack lasted for about 30 minutes.

The family's other dog, Prince, tried to defend Taz, but he was not successful.

Taz died with his head stuck between the gates. His owner says something needs to be done before another animal or person is hurt.

"We feel stuck. It feels like we are attacked because every night we wake up and have to scare these dogs away," the dog's owner, Chantal Cepeda, said.

Danny Sanchez with the Harris County Animal Shelter says his department responds to every call they receive.

"Right now, especially during school, we get inundated with those kind of calls," Sanchez said.

Cepeda says her situation is desperate, and she hopes the death of her sweet dog will make that clear to everyone involved.