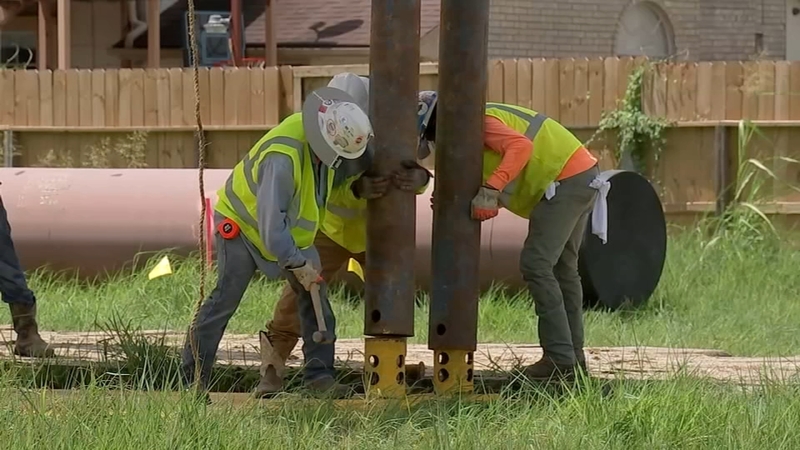 CHANNELVIEW, Texas (KTRK) -- Some people living in Channelview are fed up after a pipeline was built through their neighborhood, and now they're filing a class action lawsuit against three major companies.

The lawsuit names Centerpoint, Enterprise Products, and Oiltanking Partners. People who live near the pipeline say construction has caused flooding in the area and damaged the foundation of their homes.

"It's like, here we go again," says homeowner Wes Dorrell, showing us another crack in his wall. His home backs up to the pipeline. He and a growing number of neighbors are part of the lawsuit.

"It's not cheap," Dorrell said, adding he's spent more than $25,000 in repairs since the construction started.

Same thing over at Anthony Thompson's home. He showed us a large crack running down the side of his home.

"I was wondering if my house was getting ready to sever," Thompson said. He tells ABC13 the more they build, the worse it gets.

"It's a lot of consequences," says attorney Tej Paranjpe with PMR Law, who is representing the plaintiffs. The law firm hired an engineer to study the land behind the homes.

They claim the defendants were negligent in designing the pipeline to divert surface water away from homes, ultimately causing the issues.

"Go in, put in whatever structural items on that end, so these things don't continue to keep happening," Paranjpe said.

He also claims it's lowering the value of the thousands of homes in the neighborhood near the pipeline.

"Something needs to be done about it," Thompson says.

The plaintiffs say they want to be paid for the repairs made to their homes, the loss of value, and whatever needs to be done to stop the damage from continuing to happen.