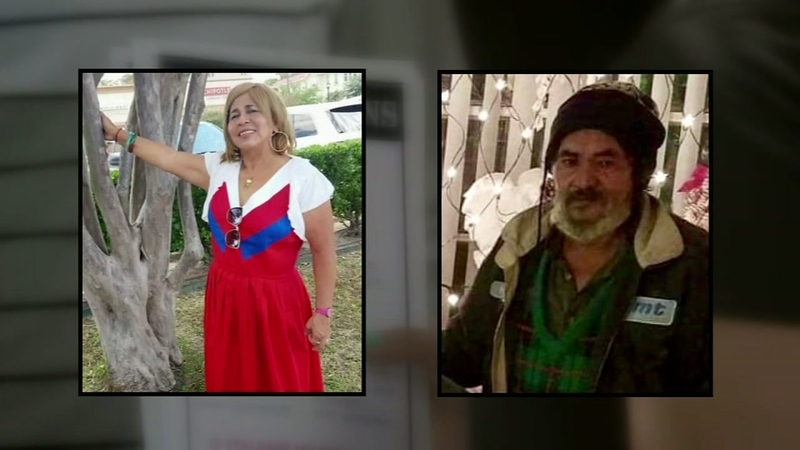 HOUSTON, Texas (KTRK) -- The person of interest in two Houston missing persons cases is behind bars in Los Angeles for a brutal killing spree, police say.

"Nobody in their right mind would do something as vicious as this," said LAPD Capt. William Hayes during a press conference on Tuesday.

Los Angeles police were not mincing words as charges were filed against Ramon Escobar, accused of violently beating seven homeless men in L.A. and Santa Monica over the past few weeks.

Police say those men were targeted as they slept, and the motive was robbery.

"Although they were homeless individuals, he appears to be homeless himself and that it looks like he was attempting to gain funds or something from them," Hayes said.

Los Angeles police announced Monday that they believe they've arrested the man responsible for the murder of two homeless men in DTLA.

Police released surveillance video of Ramon as their body count increased. He was finally found and arrested Monday night.

Of the seven victims, police say three men died and two others remain in a coma.

"It's been very surreal," said Lia Salamanca, whose mother is one of the two people missing in Houston.

"And of course it gives me a fear for what happened to my mom and my uncle."

Ramon is the person of interest in the disappearance of Dinora Escobar and her brother, Rogelio.

Investigators believe he fled Houston, driving his black Honda CRV to California shortly after he was interviewed in the missing persons cases.

"He's there at the house both days, when my uncle went missing and when my mom went missing," Salamanca said.

A man in LA arrested and charged with murder is connected to the disappearance of his two relatives, LAPD says.

Rogelio was last seen Sunday, Aug. 26 outside his home.

His sister was last seen leaving that same home, beginning a search for her brother on Tuesday, Aug. 28.

Family members say during the past year, Ramon was trying to get back on his feet. His uncle Rogelio opened up his house and his aunt Dinora, her heart.

But they say he had a mental disorder and distanced himself.

"He stopped taking his medication and that changed his attitude a lot," said one of Ramon's cousins, who asked not to be named.

Now the very two people who cared about him the most are still nowhere to be found.

"There's no more doubt in my head that he had part or he had something to do with the disappearance of my uncle and my aunt."

So far their only lead is Dinora's white van found torched in Galveston.

"The not knowing is the worst. Going to sleep every night not knowing where your family is, what they're going through," Salamanca said.

If you know anything that may help Houston police find these missing siblings, you are asked to contact authorities.