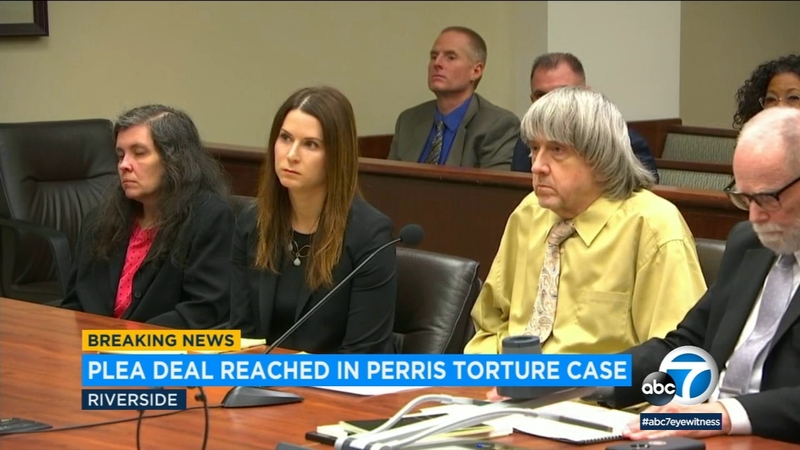 RIVERSIDE, Calif. -- David and Louise Turpin, who are accused of starving, beating and inflicting other abuse on 12 of their 13 children at their Perris home, pleaded guilty to multiple charges in the case as part of a plea deal.

The two appeared in court on Friday and pleaded guilty to at least 39 counts in connection to the abuse case. The two accepted a plea deal, meaning they will not have to go to trial. Their children will not have to testify.

The two face a maximum sentence of life in prison with possible parole in seven years.

David Turpin, 56, and his wife, 49-year-old Louise Turpin, were facing more than three dozen felony charges against them each. They both faced charges of torture, perjury, false imprisonment and abuse.

The couple was arrested at their Perris home in January after one of their daughters escaped.

Riverside County District Attorney Mike Hestrin revealed horrific details about the 13 siblings who were allegedly held captive by their parents in Perris.

Police said they found the children living in squalor and shackled to furniture.

Prosecutors have presented evidence that the couple chained their 12 children to bed as punishment and deprived them of food. Riverside County Superior Court Judge Bernard Schwartz dismissed an abuse charge pertaining to their youngest daughter, age 2.

The alleged years-long abuse was so extreme, most of the children were emaciated and barely educated.

Authorities have said the Turpin home reeked of human waste and the evidence of starvation was obvious, with the oldest of 13 siblings weighing just 82 pounds.

PHOTOS: Inside the Texas home where Perris siblings lived years ago