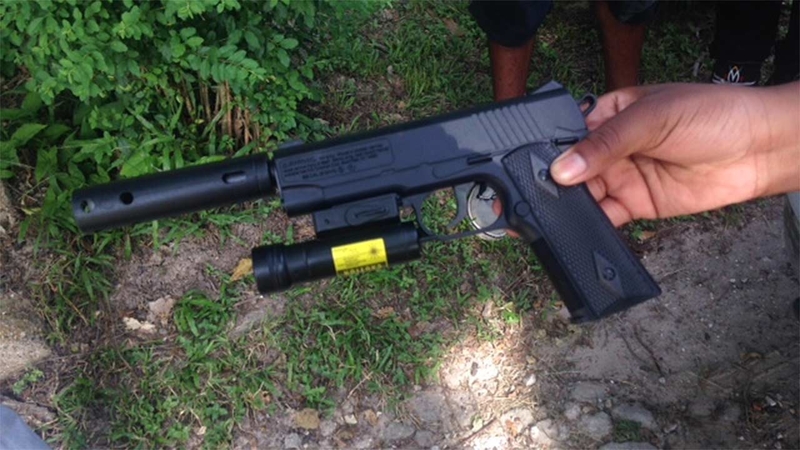 HOUSTON (KTRK) -- A north Houston father is livid a pawn shop sold his preteen a BB gun that looks like a real handgun.

Dedtrick Handy, 12, was with his older brothers at Lone Star Pawn, 1400 blk W. Mt Houston, on Wednesday. While his brothers were shopping, he shelled out the $27 and bought the gun.

"First thing he said was 'I can't wait to show my friends.' I said you can't show that to people, you can't do that," said Michael Handy, 20.

The boy never did. Once his father found out, he intervened.

"When I think about it, it makes me mad all over again. That could have gone a whole lot of ways and all of them could have been bad," Norris Handy said. "We have too many kids getting killed for stuff that looks like it's real."

Last December, Tamir Rice, also 12 years old, was shot to death by a Cleveland police officer. The circumstances are still being debated but he had a fake gun.

Handy's father questioned the pawn shop owner and so did Eyewitness News. The owner declined an on-camera interview but conceded what his sales associate did that day was wrong. He apologized and said it would never happen again.

For now the toy gun is locked up in the father's room. Michael Handy is glad he caught it in time.

"There's too many tragedies with guns. I don't plan on burying my children. I plan on them burying me," he added.

Eyewitness News checked with large retailers like Academy and Walmart. Both require customers to be 18 years and older to purchase bb guns, pellet guns and air guns.