'You choked me': Family accuses 3 Pasadena police of brutality during child's birthday party 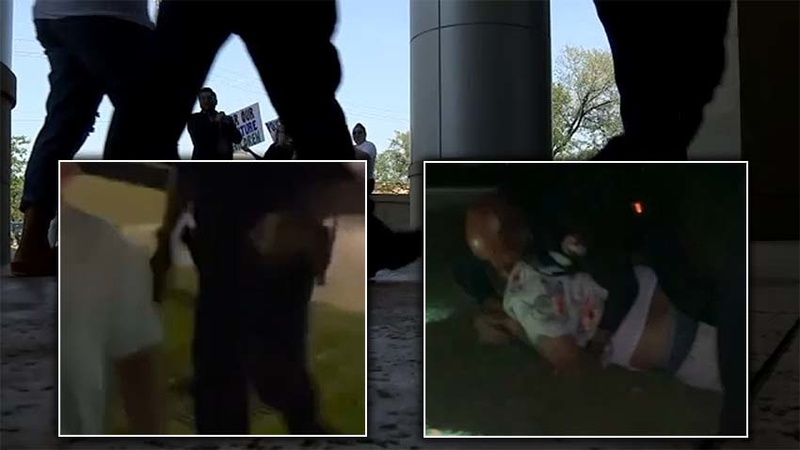 PASADENA, Texas (KTRK) -- The video given to ABC13 is dark and a little hard to make out, but you can sense things escalating quickly.

On April 30, three Pasadena police officers responded to a noise complaint at the Cavazos' home on Pine Avenue. They demanded to talk to the homeowner. The family asked the officers what crime was committed and why the patriarch Isaiah Cavazos was being detained, then things really took a turn.


"You punched me in my head four times. You choked me," Bobby Cavazos said.

Video shows one officer pulling a gun as the family backs up and tries to protect the nearby children enjoying a birthday party. Fernando Cruz says his eyebrow was busted open from being hit with handcuffs. Bobby Cavazos was thrown to the ground, and when the video is slowed down, he appears to be hit.

"They see us as just some Mexican kids or Mexican people, and they do target a lot of us Hispanics. It's very frustrating. Whenever they got out, they treated me like an animal," Bobby Cavazos continued.

FIEL Houston, an immigrant rights group, says Pasadena PD has the moral obligation to punish what they call an aggressive officer.

"We are asking for the immediate removal of officer Adams from the streets and for a thorough, internal investigation as well as a third-party investigation so that we can get to the bottom of this, and Cavazos family can have the justice they deserve," FIEL Houston executive director Cesar Espinosa said.

ABC13 was there on Friday when protestors walked into the police department to file a formal complaint.

"We are aware of the videos circulating on social media depicting some of our officers who had responded to a complaint of excessive noise at a local residence. Due to the family's public comments, we have already begun an internal review of the incident, including a complete analysis of all available body camera footage. We take all allegations of misconduct very seriously and have a process to address all citizen complaints. We encourage those individuals to contact our internal affairs division at 713-475-7807 so that a formal and thorough internal investigation can be conducted."

The three men impacted in the video; Isaiah Cavazos, Bobby Cavazos, and Fernando Cruz. All three men were charged with resisting arrest.

They don't believe they are the only ones who've been brutalized and are encouraging anyone who's had a similar experience with officer Adams or Pasadena PD to speak up.