Officer's lights and sirens not on when bicyclist hit and killed: HPD chief 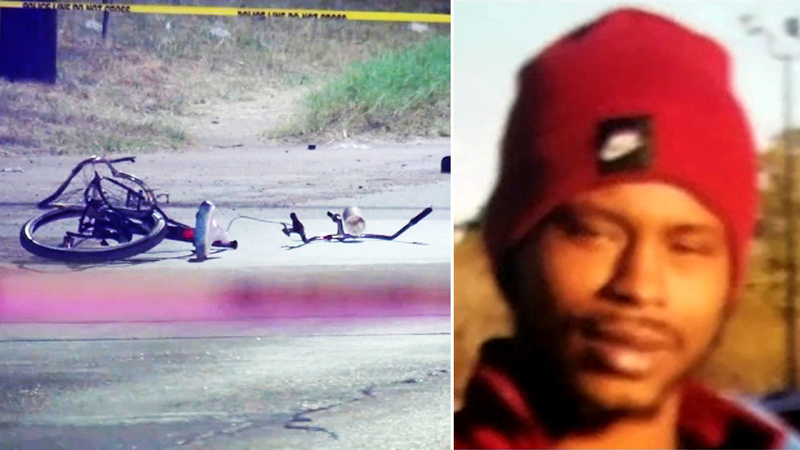 HOUSTON, Texas (KTRK) -- Police say a man was hit and killed by an officer who was responding to a call in northeast Houston. Family members identified the victim as 29-year-old Dwayne Foreman.

The deadly encounter happened Tuesday night at Wayside Drive near Joy Street, and it was all caught on the dashboard camera of a man who was parked nearby.

Video shows Foreman moments before the officer's police car hit him. Dante, the man who says he saw the crash, said the officer's lights and sirens were not on, an account that Houston Police Chief Art Acevedo confirmed. Witnesses added the patrol vehicle was traveling at a high rate of speed.

"Right after he hit him, he turned his lights on. So I mean, it's just a messed up situation where I mean, we're just gonna see what's gonna happen with it. If you just don't get slapped on the wrist or going to get fired, or, what, but he hit him. And a young man's dead now," Dante said.

Video shows the cyclist moments before the officer's police car hit him.

Although protocol allows the officer to decide, Foreman's family believes he would still be alive if the officer had decided to turn his lights on.

Nolley added, "I know no matter what the situation is, he was capable of crossing the street without getting hit by a hit. But when you have a car traveling that rate of speed, you think you got it made. But then it's right up on you."

Family and friends planned to march to his bus stop Wednesday night for a vigil in his honor.

However, according to HPD's initial findings, the bicyclist failed to yield the right of way before being hit.

According to Foreman's family, the 29-year-old who's known to ride his bike around the area also leaves behind a 10-year-old son.

"It is what it is. You can't bring him back," Foreman's stepfather Marshall Sauls told ABC13. "We're going to feel it for a couple of weeks, a couple of months."

Witnesses recalled seeing Foreman fly high into the air upon impact. One of the witnesses rushed to help him, but it was too late.

"I felt (his heart) beating real hard and put my head down by his nose. I heard him take one breath, and after that, I didn't hear him take another breath at all," said witness Adam Hardison

HPD said it is coordinating with the Harris County District Attorney's Office regarding the crash.

"We're making sure here with our investigation, that, you know, policies and so forth were followed," Gaw said. "You know, again, this is a very tragic incident where a citizen was killed."

HPD officer responding to a suicide call hit and killed a man on a bike in NW Hou. It was captured on video. Man who shared that video w #abc13 says officer did not have lights, sirens on. Latest coming up at 5:30 ⬇️⬇️⬇️ pic.twitter.com/DrwC7eqCH9