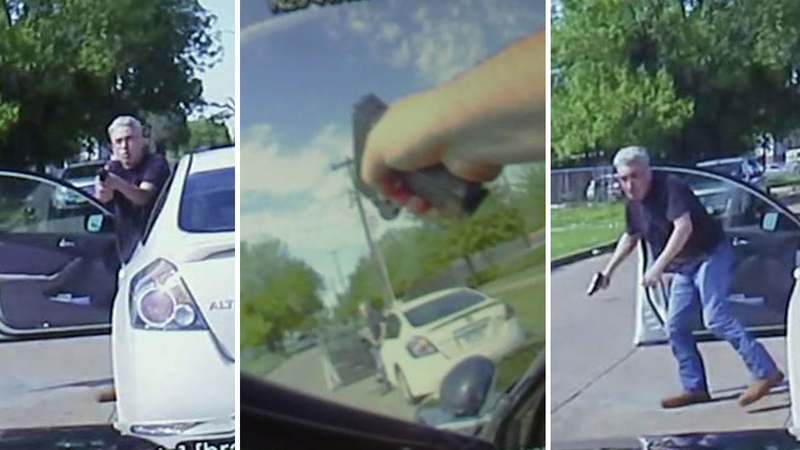 PASADENA, Texas (KTRK) -- Police have released the identity of a man who was fatally shot by a Pasadena police officer Thursday afternoon.

The Pasadena Police Department says the officer attempted to pull over Saavedra Thursday afternoon after he ran a stop sign.
Saavedra did not immediately stop, driving six blocks before coming to a stop on Spooner at the 400 block of Southmore Avenue.

Police have released dash and body cam video from the shooting, as witnesses say Saavedra opened fire on the officer.

On the video, the officer shouts, "stay in the vehicle" and "show me your hands."

"He gets out of the vehicle, turns partially so he's facing back towards the officer. At one point his hand reaches down, his right hand behind his back, and then he produces a weapon, brings it up, both hands in a shooting stance parallel to the ground, pointing it at the officer," Bruegger said. "The officer immediately starts firing, and strikes the suspect."

Eyewitness News spoke to a 63-year-old man who saw the shooting from his front yard. He says the suspect did shoot at the officer and the officer had to protect himself.

"It's unfortunate the officer is placed in the position but when a suspect points a weapon at the officer, the officer really has no choice but to defend himself," said Bruegger.

The officer, 40 years old and a 13-year veteran of Pasadena PD, was not hurt. He has been placed on administrative leave, which is standard after officer-involved shootings. A Harris County grand jury will review the case.

Police said Saavedra's gun was found next to his body at the scene.

Police say at least one person is dead after an officer-involved shooting in Pasadena.