2 killed in Montgomery Co. plane crash have been identified 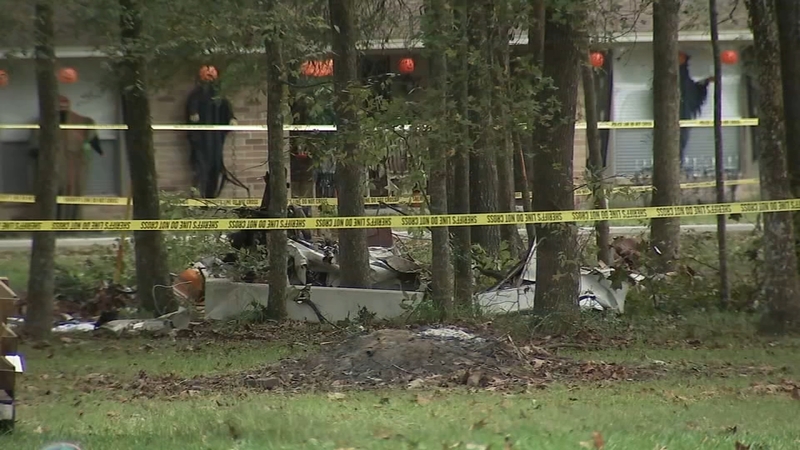 WOODBRANCH, Texas (KTRK) -- A Pearland resident was one of the two people on board a plane that crashed over the weekend in a wooded area of Montgomery County.

Texas Department of Safety identified the two people who died in the crash as Nodal Aoki, 41, of Porter, and Karthik Balakrishnan, 46, of Pearland. Aoki was behind the controls of the small aircraft.

The crash happened in the area of Linnwood Street in Woodbranch, near US 59 around 8:40 a.m. Sunday.

Residents in the area reported hearing the plane go down and Texas DPS troopers responded to the scene.

"My house shook," one resident said. "I thought something hit the house, so I ran out the front door. I looked around and the neighbors were all running outside."

Ahmad Siddiqi was distraught and said the pilot involved was his longtime friend who leaves behind a wife and three kids.

"Even until now I cannot even believe that it was him because he is such a good person, such a good pilot, such an experienced, such an all-together very, very humble and kind human being," Siddiqi said.

Woodbranch mayor Mike Tyson said the incident was completely unexpected and that this was "something new to us" and said "we hope it never happens to someone again."

The single-engine aircraft was a Grumman AA-5A Cheetah, which has four seats and was registered to a licensed pilot in Porter, according to FAA records.

Investigators with the FAA are taking the lead on the investigation into what led to the crash. The NTSB is also investigating.

The NTSB is investigating the crash Sunday of a Grumman AA-5A in Woodbranch, Texas.